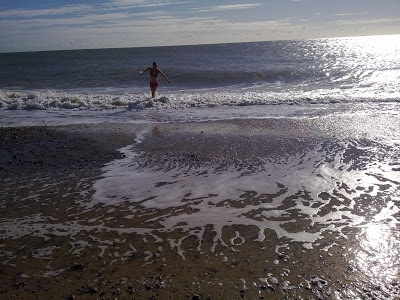 Last month my dear friend and fellow Transitioner Adrienne Campbell died. When she told me she was going into retreat to do battle with the cancer that had returned, I knew I wouldn’t see her again. So I went down to the sea and swam in the path of the sun and remembered everything we had said to each other. It was Lughnasa, around the time of her 52nd birthday. I lay in the waves and let them take my weight, feeling the currents underneath me, the wind on my face, the children laughing on the shore, the cry of the terns, the vastness of the elements, sea and sky. I’m swimming for you, I told her. Because she loved wild swimming. It was something we shared, along with a love of all wild things, bees, plants, ancestors, and of course, Transition.

I went swimming all August and all September. Mark and I would sit in the dunes and watch the sun come up. It was unusually calm most days, and always full of light. In her hometown, Adrienne came out of retreat and welcomed people into her bright room. She made a video about her dying and people from all round the world celebrated her in an extraordinary on-line testimony. By the autumn equinox the weather turned stormy and the sea became rough and very cold. I couldn’t stay in for very long. In her bed in Lewes Adrienne started to slip away. As All Souls approached, I went to the woods and sat by the pond. All around me the hornbeams dripped rainwater onto the surface, making circles that moved ever outward. Everything was silent and still. I was by myself, in the wood, and yet I was not alone.

All people come and go in your life, but some people remain deep in your heart. You remember them even when you are not close to them, in another country, far away. It’s as if they had always been there. Adrienne walked back into my life three years ago. I had recently joined Sustainable Bungay and I was in Beccles Library and watching the trailer for the documentary, In Transition:

“Oh my god, it’s Adrienne!” I cried out loud and rushed over to tell Mark. “I’m going to email her now!” We had not seen each other for twenty five years. When we were in our 20s we had been part of a group called The Women’s Dinner Party. It was formed by four of us – writers, editors all – who wanted to meet up as intelligent female beings, rather than ninnies and have meaningful conversations. We used to meet up in each other’s houses, hosting meals for about 8 or 10 and share our world-views. We had one rule: no talking about boyfriends or holidays. We worked in different fields and networks, so it was a great way to exchange knowledge. Adrienne (Katy then) was writing science stories for The Economist, I was writing style stories for Vogue and Marxism Today. She was quieter than Cat and Emma, and surprised me utterly one summer evening by giving an off-the-cuff perfect low-down on quantum mechanics. Afterwards we went outside and stood in the sun and she told me how she came originally from America. “Oh”, I said, and suddenly saw, underneath her shyness and gazelle-like beauty, a powerful spirit yearning to go home.

Adrienne surprised us all the following year by disappearing and joining a Subud community in Australia. I visited her once when she returned to the city and was staying in the squatted hippy kingdom of Frestonia. Even though it was not far from where I lived in Notting Hill, we were worlds apart. She was married with babies, living a deliberate spiritual path. I was still on the fast track. I didn’t know then that I too would leave my city life of dinner parties, boyfriends and holidays. I didn’t know either that, like her, I would, not be coming back.

When I travelled to the Transition conference in 2010 in Devon, I emerged out of the station and jumped, because there waiting for a taxi, was a familiar-looking slim figure with curly hair. It was her eldest daughter Sophia. “Mum’s really looking forward to seeing you,” she said.

It was mutual. When we met we didn’t stop talking; we had so much to say. Somehow we knew that we wouldn’t have much time to say it in. It would be like that for the next three years. On the phone mostly, by email, and sometimes face-to-face, at Transition convergences and the London Bee Summit. Some people you don’t know for that long, and yet you can go very very deep with them. I don’t know anyone else now (apart from Mark) with whom I can go as deep as I could with Adrienne. There were no taboos, or politeness in the way of our communication. Everything was allowed.

Everyone knows a different person in one person - that’s how it is on this earth.  I wanted to write about the Adrienne I knew, briefly in time, but deeply in spirit,, because I wanted to pay respect and honour the person who could look difficulty in the eye. Because I haven’t met anyone else in Transition who could talk from this perspective. Most people shy away from the shadows and traumas when they emerge, when the skeletons come rattling out of the closet. Adrienne advanced towards them, sun in hand, courageously.  She always listened, sister lion that she always was. 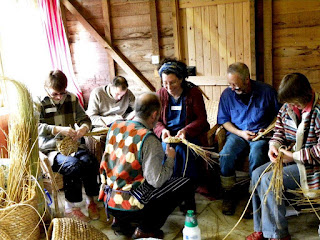 You miss people because when they walk into a room, or you stand beside them, only they can make you feel a certain way. I will miss Adrienne because she had a singular quality that few people possess: she made you feel as though you mattered, that everything mattered, and that kind of depth and generosity makes for a whole different relationship with the world. We spoke at length about the difficulties we had experienced in Transition: she like me had been endlessly scapegoated in her life and also by people in her initiative. She was often cast as “the difficult person”, the one who brought stuff up, the one who brought the elephant into the room, or called the company to account. When I told her about our Bungay Community Bees apiaries, she quizzed me:

“Are you feeding them? she asked.
“Yes, a little for the winter,” I replied.
“That’s not good practice,” she said.

A natural beekeeper for 20 years, a queen bee who knew how to co-ordinate the flight path and command the loyalty of all the workers and drones in her colony, she knew when something was out of alignment.

“Honey should only be used as a medicine,” she stated. “It’s a gift, not a commodity,”

So I stopped using honey carelessly to sweeten my food. She was fierce and I loved her for that. Because I knew that fierceness came from an ancestral being that I recognised – sentinel to the planet, as the red rocks of America. A being I had glimpsed many years ago.  She told me I should get a livelihood from my Transition work. I told her she was a great writer and invited her to join the Social Reporting Project. I am fierce too. That’s why we got on, We felt the same about a lot of things. About activism, about local food, about medicine, about marking the equninoxes and solstices, about duty and love and swimming upstream against the flow, getting  back to the point where we can all start again.

Last October we had a long discussion about the earth. It was in Lewes, just after Transition Camp, where we had shared a yurt and given talks about bees and plants. “To really see what is going on you have to shift your perception,” I told her, “and communicate with the planet directly.”  “I am too much of a scientist,” she told me, and said she could not bear to think about the future that the data made so stark and inevitable.

We went down to her allotment to pick salad leaves for supper. We sat by the hive in the small forest garden she had made. I put my hand against the glass pane and felt the warmth of the bees and the scent of the fragrant wax. We sat in silence as the twilight came to the gardens and the moon rose in the sky. It felt as if we had always sat there in that vibration of everything mattering, of having its place in time, that we recognise inwardly as the heart, but rarely voice out loud.

And then, without saying anything, we got up and moved away. I saw her one more time after that, at our Social Reporting Project editorial meeting to discuss the upcoming year in the greenhouse at Finsbury Park. It was on one of the most beautiful frosty mornings I have ever seen.  She would write later about going on a locavore diet, overfishing, community solar power, growing oats, permaculture, making salt from sea water boiled on charcoal (which she had made herself), buying nothing for a year, not shopping in supermarkets (as the lead comment for the Transition Free Press), sharing a neighbourhood car, and all the projects she was justly proud of in her individual life and in her home town. She was an instigator and pioneer in all things resilient, and I’m certain many fellow Transitioners will sing her praises for all the great work she did on our behalf at the celebration ceremony in Lewes this Sunday.

But I wanted to write this personal blog today because our paths crossed in an extraordinary and significant way. She was someone who walked through people’s lives and shook them up. She could do this because she had undergone radical change herself. Sometimes this was up the wrong way, but this didn’t mean the shaking wasn’t right. Shaking is what we need to wake each other up out of our collective sleep. To get us to turn around and head upriver. That’s something we both knew was necessary in Transition, but was a continual challenge to experience and to go through with heart, especially within groups.  Denial and projection are the worst of its side-effects, and it meant a lot that we could speak of these things together, when no one else would.

We parted mythically and suddenly on the underground at King’s Cross that day. The inspectors hauled me off the train at for an incorrect ticket. I waved goodbye, as she stood by the door in her long, reskilled coat with its wild mane collar. Then she and Mark and Caroline disappeared down the tunnel, en route to Occupy St Pauls.

“I hope she will be all right,” said Caroline,
“She’ll be fine,” laughed Adrienne.

Which, of course, I was. 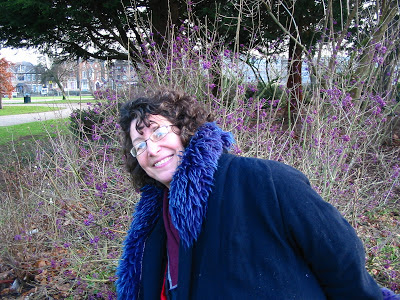 Adrienne Campbell was a founder member of Transition Town Lewes and a founder reporter on the Social Reporting Project. She also wrote a weekly blog, 100 Monkeys.