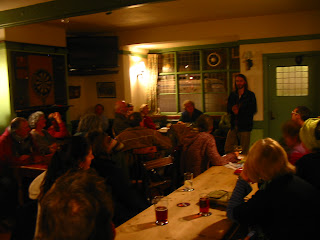 “So long as you have a good hat on and boots," said Paul. We were not talking fashion, we were talking insulation at the second themed Green Drinks on Energy and Community. Once my head was full of French movies and tailored coats, but now in Transition my attention is on more practical things. At the Waveney Rural Summit I found myself intricately involved in Bungay community bus routes, here in how two feet of breathable sheep’s wool will keep you toasty no matter what the weather. The energy was buzzing in the Green Dragon, as everyone swapped data about solar panels and wind speeds, fired questions, busily immersed in the details of KW, PV and CO2. How many people does it take to erect a turbine? Where are grants to be found? What is the payback time?

The backroom was full: 27 people from different locations including the local church, UEA and the Centre of Alternative Technology had gathered to discuss energy. Josiah hosted the evening which took its shape from our first one on Economics and Livelihoods. Two expert conversationalists, John Taylor, the Climate Change officer from Suffolk county council and Simon Weeks of Cookpole Energy Action spoke about how the new push is towards community energy projects:

John placed the evening’s discussion within the wide frame of global warming, resource shortage, peak oil and the stark fact that during the boomtime 80s and 90s Britain could afford to export its oil and gas, but now had to import it, along with its fluctuating fortunes. We all live on an island that was once energy rich but is no longer: our vast coal reserves that fuelled the industrial revolution and North Sea oil as John pointed out in his wide-reaching introduction “drove a lot of the prosperity of the 80s and 90s, but now is in long-term decline.”

On a global level the energy market is "like a crowded bar," he explained. “Though there is big demand the bar can just about keep up; but outside a coach with a rugby team has turned up. Is it possible to deliver?”

We are challenged as a nation by an inclement damp climate and houses that were not built for energy-efficiency. Nor do we have enough trees to spare for mass conversion to wood-burning stoves (you need 3 tons per household per year to keep warm). So there is a need for retrofit and massive insulation on an individual scale, coupled with a move on a community scale to get more locally resilient. We need to start forming co-operatives and social enterprises and pool resources to buy solar panels and wind-turbines to generate local electricity.

Wind turbines are a sticky subject in East Anglia despite its being a landscape historically peppered with mills (500 windmills and 200 watermills in Suffolk alone). However community wind-turbines are smaller and less controversial. Their challenge lies in the perseverance of each community to pull the project off. Funding big projects takes time, energy, resources and a massive shift in attitude, as people relearn how to negotiate and work together. Simon Weeks quotes the Good Neighbour scheme: people offering their services free to help everyone get wise on energy. Cookpole Energy Action has already been going for two and a half years to erect two 18 metre Gaia 133 turbines (“Not the most efficient,” he agreed, because the higher you go the more wind there is). Two local farmers are providing land in return for free electricity (wind was preferred to a solar panel array, due to the space – turbines only take up 5 sq metres of field). The turbines cost £100,000 which they are finding through grants and fund-raising.

Most of the villagers are on-board though a few households do not support the enterprise. How do they deal with that?
"We listen to their views and try to include them," replied Simon, "Because the last thing we want is a divided community."

Cookpole reckon on making £16, 000 per year (£2000 of which will go towards maintenance) once the turbines are installed and the money will go towards the social regeneration of the community. The two outlaying villages of Cookley and Walpole have no pub, no school, no shop, no village hall (except a pavilion) - and the intent of the project is to provide the community of 150 households with the necessary green infrastructure to thrive in a downturning resource scarce culture. Setting up a community woodland for example.

"We were the big society before there was a big society," laughed Simon.

"One minute there is no society and now there’s a big one," remarked Lucinda. Originally from Brixton (where there is a strong Transition initiative) she told me how the borough was changing, how a lot of the poorer, mostly Caribbean residents were being moved out to Banbury. "Oh, that happened in Leiston," I said "when everyone was moved out of the East End". Someone I had met when I first moved to Suffolk had called it “slum clearance” and I remember how shocked I was not so much by the fact itself (though that is shocking) but that someone intelligent and apparently philanthropic should say such a thing and not give a damn.

Simon Weeks comes from another time and another paradigm: he has a stack of experience he is happy to share, especially the pitfalls to avoid. His present difficulty lies in unsure planning details regarding bat and acoustic surveys where there is no legislation for small wind-turbines (only for large wind-farms). He is the first to admit there are no assurances when it comes to the future:

“One thing you can guarantee: there ain’t no more oil and electricity prices will rise."

At question time David Gibson spoke about the 11 1/2 Kwp solar array on the Emmanuel Church (whose conference on Climate Change in 2007 sparked Sustainable Bungay into being). He was once the energy conservation officer for BT before joining the ministry and like many English churches heating is high on Emmanuel's agenda. Their funds came from grants and the rest has been donated or given in interest free loans by the faithful. The scheme has cost £80, 000 (30,000 from government grants). Payback is over 7/8 years.

Afterwards we broke up into groups and moved around the room, speaking to each other about the different aspects of energy efficiency and micro-generation. I talked with Paul about what it was like to live off-grid for seven years (in Thetford Forest) and remembered a time in my own life when I had lived for several summers on an island in Greece. I remembered how everyone gathered in the cafes before electricity came to people’s houses and there were cars and television. We had running water twice a week, I said, and the bread was baked in a communal oven in the side of a mountain. The communal places were where the warmth and the meaning was.

We’ve lived such individualistic lives with our houses set at 21 degrees, with our daily hot baths and washable lifestyle, we’re going to have to shape our lives very differently, get used to living in colder places, invest in good hats and boots and start sharing our resources.

“Even if we cover the whole of Wales with wind-turbines it’s never going to be enough to maintain the energy we are used to,” said Nick. That’s a fact that most of us aren’t looking at right now. And in the centrally-heated warmth of our own home, not one we want to much. But in a buzzing room, with all the options and possibilities in front of you and 27 people pooling their time and attention, that’s a different matter. A low carbon community starts looking like the place you want to be.

Green Drinks will resume in 2011 and will engage in different Transition themes, including Social Enterprise, Transport, Waste and Cultural Values. Keep an eye out for our next SB newsletter next month, or check the calendar on this website.