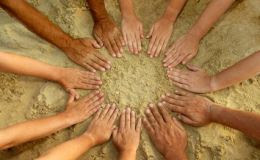 At the beginning of February I was invited to Totnes to feedback on the first draft of the new Transition book (working title The Transition Companion). As well as members of the Network, there were Transitioners from Lewes, Forest Row, Belsize Park, Tooting and Edinburgh. It was an intense two days spent sitting in a circle, discussing the huge volume of work that has been going on behind the scenes since the 63 Patterns (now Ingredients and Tools) were unveiled at the Transition Conference last summer.

The book authored by Rob Hopkins is in two sections: the first a layout of the main structures and themes of Transition, including the drivers of Peak Oil, Climate Change and Economic recession, and the second, Ingredients and Tools, each of which has examples and success stories from initiatives from around the world, including TN's food projects (Local Food Initiatives), Transition Circles (Street-by-Street Behavioural Change) and this blog (Becoming the Media). The book is in six sections that set out how an initiative might form and then flourish, running from useful qualities through to setting up a Steering Group to Raising Awareness to community infrastructure to engaging with National Policies. 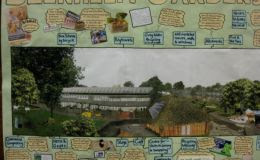 We fed back our responses. We asked questions: would this book be a replacement for the Handbook?(yes). Is it for readers who know nothing about Transition, or Transitioners? (both) We asked thorny questions about political frames, about Inner Transition, about the Big Society. We looked at our initiatives from the angle of the ingredients. We conducted two Open Space sessions on specific sections, notably those that involved groups, and afterwards went out for friendly and exuberant drinks.

One thing struck me: this is a useful, clear and intelligent manual, but not everything experienced in Transition is held within its encyclopedic covers. There was often a tension in the room, as people’s stormy experience of Transition (and most contributors had been in their initiatives for over two years) pulled and pushed with the book’s cool and calm setting-out of how Transition should be. The desire to draw an accurate picture struggled with the book’s necessarily promotional nature. We don’t want to put people off was a common cry. On the other hand Transition doesn’t promise anyone a rose garden. Gotta be a little rain sometime.

The roses are not hard to paint. It’s clear that engaging in Transition provides an exciting opportunity for people to combine their visions and skills in a way that is entirely new. But the wet is often hard to weather especially during that crucial post-honeymoon period after the initial sunshine fades. The reality is Transition is hard work. Communities and councils don’t always respond positively. People argue, fall out and leave. Often for reasons none of us have enough time and patience to understand at depth. There’s personal damage and a lot of unanswered social dilemmas. And the kind of design frame in which the book (and indeed much of the modern behavioural world) is set doesn’t give us a common language in which to discuss them.

Our premise is that we can start again with whoever is in the room, but our difficulty is that we are not just the people in the room. We come with history, our personal and planetary legacies. We come with class positions, with political leanings, archetypal constraints and religious beliefs, cultural differences, defence systems, unreal fears and hopes. Some of this is our own “stuff”, but most of it is our inheritance as social beings, a five thousand year old Empire that runs in our collective veins and we have to figure out a way to deal with that as that three-fold squeeze starts heading our way. We have been configured to think individualistically, to deal with every problem by splitting and attack and we have to transform ourselves into the kinds of people who can work together equally under pressure. Our hardest task is to dismantle the hierarchies that constrict our actions and imaginations with all the unkindness of a caste system.

If we’re lucky and we like each other, if we are engaged in strong, creative, practical ventures we can naturally pull together. That kind of harmonic convergence can overcome mountains. If we don’t no amount of design or psychology or spiritual right-on attitude right now is going to help us. Because when push comes to shove we have to have ingenuity and strength and genuine affection to hold together. We have to access our deep and intelligent humanity and forge a language in which we can communicate directly and for real. Anything phony will not serve us.

The tension in the meeting was the common media tension between marketing and editorial, between objective and subjective reporting. The official story written by me without me in it and the unofficial story with the “I” as the means by which the story is understood. The difference between saying what Transition Norwich is (the website/news blog) or how we experience it (the premise for This Low Carbon Life). This blog is unusual in that everyone is allowed to say how Transition feels, what it looks like, tastes like, what it reminds us of, in their own style. We can say what we like or dislike, express both difficulty and joy. That kind of allowance and editorial freedom is important because it allows people to know they are not alone with the thoughts they are thinking, and the feelings they are having. Those creative expressions are what bring about change. They act like strange attractors in the field, bringing chaos into order, breaking limit cycles, challenging the official version of things. All our upbringings prevent us from saying what in our hearts we know to be true, because all civilisations depend on the people keeping silent. Somehow we have to let them speak. Somehow we have to say that the Emperor is wearing no clothes.

You don’t have to be a writer or in Transition to know the pressure the status quo exerts on all of us. Everyone knows, for example, that how the Family appears in society and what goes on behind closed doors are two different stories. Sometimes the feelings are too great to bear and people spill the beans. And whole lives are turned around because they do. Somehow we’re going to have to talk to each other as if everyone can hear what we are saying. If we want to break down those ancient barriers that keep us apart and create the culture we say we want we are going to have to find a way to tell those stories in Transition. 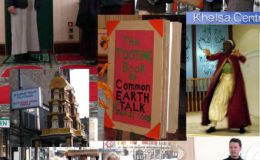