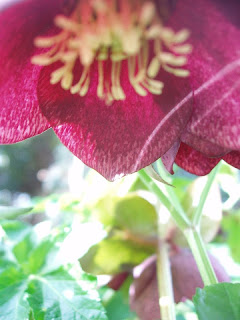 Yesterday I saw my first bee. I bent down and smelled the winter hellebore and it flew out of the fragrant green and pink petals. One of those huge bumble bees that buzz loudly around the first flowers of the year. Spring is coming and I’m feeling torn in my attentions. My eye glancing up at pussy willow unfurling golden fronds, down at the henbit amongst the growing grass. The flowers are coming back. You can feel their presence and the sap rising in the trees.

This picture is of an exotic hellebore that I liberated from a well-heeled garden nearby and planted down the lane under a holly tree. A spot of guerrilla gardening in the back country. It’s a hard time for bees right now and any flowers that provide early nectar and pollen are in need of a propagating hand. The UN has just published a report about the plight of world bees and are calling for wide-ranging protection of wild and feral flowers everywhere.

Today though my attention is focused on human affairs. I’m prepping for a meeting with Peter Aldous MP with fellow members of Sustainable Bungay. We're taking part in the Big Climate Reconnection, organised by the Stop Climate Chaos Coalition and I’m reading up on the Energy Bill and Renewable Heat Incentives and getting ready for the three asks, relevant to the Climate Change Act. Later we're going to a public meeting with Therese Coffey MP down in Southwold regarding the ship-to-ship oil transfers between tankers in Sole Bay. It's all about politics this week. Watch this space! 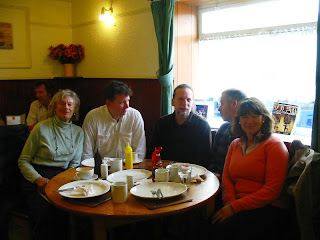 part two This is a picture of us having breakfast and a debrief at the Buttercross Tea Rooms. 30 minutes goes quickly when you're considering all the ramifications of Climate Change. Aldous is on the Environmental Audit Committee which is a cross-party group that monitors environmental and sustainability issues in all departments. All of us spoke about what kind of real-time actions a 60% carbon reduction by 2030 would require at local, national and international levels, including creating a low-carbon “powerdown” culture.

Josiah asked about TEQs and the suggestion of a sustainable development post in response to DEFRA’s recent (very woolly) report on “sustainable growth”. Nick asked about the Green Investment Bank, Daphne about the funding of fuel cells (which her father had invented). His agent – leader of the Conservative group at Waveney District Council – eyed us watchfully. One of the amendments to the Energy Bill the SCC Coalition recommended was that the carbon reduction target should be endorsed by local councils (after the once Transition-friendly Somerset CC cancelled all its climate change work this week we were keen to emphasise this). We can’t interfere with local councils, Aldous said. And went on to inform us that the official definition of fuel poverty was about to be changed.

What struck me was how our positions had shifted. At our meeting in November there was an element of excitement and tension. Aldous was behind his new office desk, most of us sat on the floor. Now we were stable and focused and sitting around a table in a community centre. The coalition government have since shown their colours. We have signed petitions and held placards, met up in the spirit of resistance. We know what is at stake. And not just those of us in Transition.

Down in Southwold the hall was packed and the people were in a rebellious mood. Therese Coffey was being held to account for preventing the ban on Russian oil tankers using the bay as a “lorry park” and putting the heritage coastline at risk. Two years ago the ship-to-ship transfers rose from 13 a year to 250. Instead of coming to port and paying harbour fees they transfer oil at sea (Sole Bay is shallow and calm and unhampered by shipping lanes). This is a conservative town but the Tory MP for Suffolk Coastal was given no quarter.

Are you on our side? asked the floor. Coffey slid away from the question. It was clear she was not. It’s becoming transparently clear, in spite of the complexity of most issues, whose side the Government is on. Not the small businesses of local towns, the economy that creates the green jobs that Kerry was writing about, the alternative wind and solar manufacturers (and certainly not the environment), but the oil business, agri-business, the nuclear business. Corporate power. Famously these corporations work by being invisible, but as we come together, as we swarm to defend our colony and our hive we’re bringing to light exactly who and what is raiding it. There’s a buzz in the air. Spring is coming on earth, and not just for the flowers.