A Short Story about Sticks 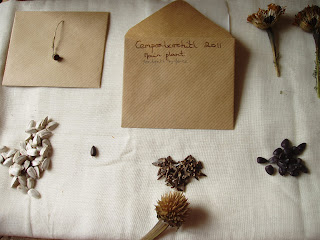 Some people are seed people. They are able to conjure new shoots and roots in all kinds of soils and circumstances. Some are grafters, creating new orchards with their careful attention and skill. Some of us are come-what-may, what-the-hell cuttings people. We like to stick sticks in jam jars or pots of soil and leave them to do their thing. Well, it might take we say blithely, and get on with something else all winter. One day we find small sage leaves on the kitchen window, fig twigs looking vibrant in the garden, and are amazed they have grown roots and are already budding in March. A miracle! we exclaim. Wow! Yay! and all manner of enthusiastic sounds.

We are a reckless and an exuberant tribe. 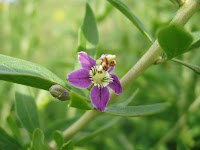 This is a small story about twigs and a plant known as Duke of Argyll Tea Tree, a grand and proprietorial title given to a humble shrub that grows in the mountains of China and Tibet. The eponymous Duke understood the bush would make tea and so brought a shipload of cuttings home in 1739. Or the labels got switched between Lycium chinenses and Camellia sinensis mid-voyage, depending on what version you read. In the manner of all weeds, it escaped the Empire's clutches and discovered, like its compatriot, the railway buddleia, conditions in Britain that were perfect for itself and flourished. Now it grows just about anywhere along the East Anglia seaboard. You might miss its arched and small-leaved form most of the year, but notice its summer flowers as you head to the beach, winking at you with violet eyes.

It's a solanaceous plant from the same family as the nutritious potato and aubergine and the highly poisonous datura and belladonna, a family of food and medicine givers. If the Duke had remembered his botany he might have studied the plant more closely and found he had indeed a treasure in his hold. Because the plant contains both qualities in its prodigious oval red fruits. Known as wolf berry in the West and goji berry in the East it is one of the world's great superfoods, highly anti-oxidant, packed with minerals, and a peerless tonic and medicine for the immune system and the eyes. There is not a part of the body it does not revivify in some way - liver, heart, veins, the sexual organs of men past their prime.

This is a story about cuttings in a week where we are looking at seeds. This is a story about writing where we are looking at books. So I'm not strictly following the brief here, but hey, you don't get precision with the people who put sticks in the ground and hope for the best. This winter I've been polishing up a book I wrote a few years ago about plants. It's not a seedy sort of book that tells you how to grow vegetables and flowers, but about the things that happen around plants and people that love them, the kinds of connections you make and how things that seem a mistake turn out to be fortuitous.

For over a year now I've been communicating with Jeremy Bartlett who runs the wonderful Grapes Hill Community Garden, and writes a report each month on the TN Bulletin. This year I suggested the Low Carbon Cookbook crew might rent one of the raised beds and grow food and medicine plants there as a showcase. Too many local people (luckily for the Garden) wanted to grow veg this year, so we settled on a compromise. I can give you a corner, he told us and some space for signs.

"How about three plants," I suggested, "that show how you can grow ancient and modern superfoods in your own backgarden for free?"

I had just had a long conversation with Jo Balfe at the Nectar Cafe who uses goji berries from a local allotment (which she dries herself - raw gojis are a challenging taste) in lots of her homemade teas and raw food dishes. Imported from China they can be pricey as well as carbon-intensive (£2 for 100g). A second year wolfberry bush will yield a kilo of berries for free and are a great alternative to sultanas in your muesli.

"Oh, I'll grow the Chia and amaranth," said Mark and began rummaging in his seed box, leafing through catalogues (he is a seed man). "Where are we going to get a bush from?" 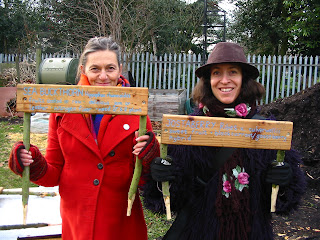 This January we went up to London to meet the Social Reporting crew in Finsbury Park. We converged around the beds of Edible Landscapes London ,which is a Transition plant and tree nursery, growing and grafting all kinds of perennial shrubs and trees, many of the species recommended by Martin Crawford, master forest gardener of England. There were goji twigs EVERYWHERE. You can't go wrong with them, said Jo, the project's co-ordinator. "Let's take some home", I said to Mark, and later wrote to Jeremy about our find. Wonderful! he wrote back. I've put a link to ELL on the website. 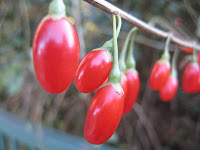 So this is a small story about cuttings and connections. About a bunch of bare sticks that links people, gardens, projects, initiatives, cities, nations. That links cooks, growers, medicine people, brings small miracles in its wake. It costs nothing to do and means everything to experience. You believe it might happen, but you don't fuss or pay too much attention. One day the stick surprises you with buds and leaves, and you rejoice out loud and tell everyone you see. It worked, you cry. How marvellous, another plant! another tree!

We are a joyous, communicative tribe.

When you sit down and write your own book or blog, or read other people's, like John's yesterday about weeds, or Adrienne's on local food systems, you realise that life happens as it should because people make time to love the world. The writers are the ones who record everything, who notice the beauty of everything connecting, the plants, the people and the places. The sound of another spring happening all across the land. 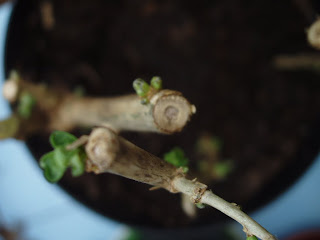 Seeds on the table, illustration for Plant Communications chapter in 52 Flowers That Shook My World; morning glory cover of 52 flowers (Two Ravens Press); city wolfberries from a great blog called Reading History in the Green Spaces of Berlin; Jo Homan and me at Edible Landscapes with some signs she made for edible bushes; goji berry twigs in our conservatory (MW).
Posted by Charlotte Du Cann at 15:34