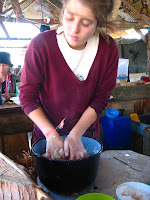 Today's post is from the Sunrise Festival where I worked in the kitchens at the Tin Village, mostly helping run the pizza workshop. Next week I'll be writing up a recipe for that delicious, ubiquitous dish (here baked in hand-made earth ovens) for our Low Carbon Cookbook slot. Right now here is the background . . .


Standing in the camera oscura, a small wooden island in a sea of mud, Sunrise Festival 2012. I'm watching the crowd flow past slowly like a dream. Pennants are flying, pinnacles of tents pointing to the sky. The camera above the room gyrates in a circle around us. A group of small girls who are tracking it from the outside laugh and wave at us inside. We can see you watching us! It's extraordinary how this lens creates a different relationship with everything you see. You treasure it somehow, love the way you can pick out people and the shapes they make that would otherwise be a blur. 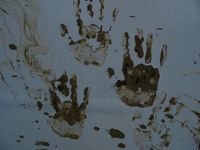 Time does that sometimes, acts like a lens. In the madness of the mud, in the struggle to get from place to place you don't notice the beauty of things. The handprints on the wall.

This is a postcard from the Sunrise Festival. Or perhaps it's a letter, a smoky, muddy love letter. It's from a temporary place called Tin Village that appears at festivals sometimes across England: at Sunrise Off-grid, at Tolpuddle, at Glastonbury. It goes up and then it comes down; people come together and then they depart. Something in the way the place is constructed stays however. That's the essence I'm trying to recapture. It was a watershed midsummer (and that's not just the rain). I had been continuously on line for weeks and then for five days I came off. I was offered a lift from Simon, Pete and Georgina from Norwich who wanted to hear about Dark Mountain. And so we talked non-stop about the world in transition, as we headed to the hill and pasture country of the West. 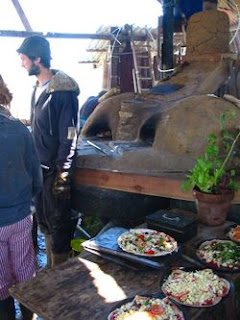 That's one thing festivals do: they break your crystallised patterns, break you open, open you to people you would be unlikely to meet otherwise, make you look at where you are going and where you are coming from. Teach you to receive gifts, as much as give them, take you out of your personal camera oscura and into the field. Perhaps the muddiest field you have ever encountered. 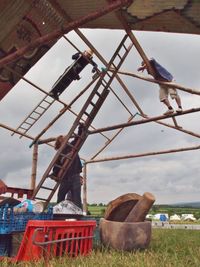 Tin Village is an off-grid experiment in community living. It is built by a core crew who put up everything from scratch: the outbuildings, earth ovens, grey waste system, rocket stove kitchen, field shower, permaculture garden. During the festival an additional crew arrive and we work at least four hours a day running the pizza workshop and cafe, which provides the income for the enterprise. Most of us also give workshops (I gave two: one on Herbs for Resilience, based on my book, 52 Flowers That Shook My World - published today! - and another on grassroots communications with a poet from Occupy London called Venus, based on my experiences with this blog and the Transition Free Press). The sessions range from the intellectual and political to the practical and inspirational - from how to get involved with Frack-Off and Diggers 2012 to thatching and foot massage. This year the Village has been co-ordinated by Ian Westmoreland from Transition Heathrow, so there is a strong activist element. It's a lot less fluffy and spiritual than last year, and there is something exciting about this set of progressive and environmental groups coming together in one place, working alongside each other, swapping stories, making links. Last year I felt on the edge - everything was more distant, more polite. This year I am in the thick of things. 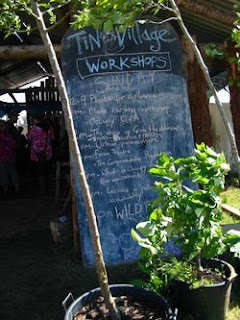 Where we meet is around the fires, the two pizza ovens and the four rockets stoves in the kitchen run by Harry from the Kitchen Collective. The tasks at hand first appear insurrmountable. At our pre-Festival meeting around the camp fire we put our hands up for camp duties and write our names on a rota. Then the rain began to fall. A rain that will last all weekend and turn the whole village into a quagmire, put out the fires, soak the carpets, drench ourselves, dampen the firewood, dampen everything - except our spirits.

Maybe it's because I have a warrior heart that I love the spirit of this camp. Not warrior in the sense of killing and fighting, but in the sense of a people coming together in resilience, not serving their own interests, but doing their own thing impeccably, which turns out to be everyone else's: acting collectively, sharing skills, knowledge, resources. The rain washed away the rota, so we let it go. Looking from the outside from the position of contol, running a temporary working community without a plan or leadership seems impossible, but when we got down to it everything self-organised.

I went to all kinds of music events during the weekend, danced, chanted at sunset, drank chai, listened to some great talks at the Green Dome - Mark Boyle, Maddy Harland, Theo Simon - spoke with low carbon cooks and Transitioners from all over the county, had a lovely meal with fellow reporter Ann and her family in their tipi, but I kept feeling pulled towards the home station of the Village.

Something there made sense in a way that a lot of the festival stuff, which is centered around entertainment did not. That floated away, the stuff we did for real stayed. The physical work - making dough, digging ditches, washing mountains of dishes, collecting plants in the rain, staggering across the field in my mud-encased boots, keeping the tiny tent dry for sleeping, talking to strangers who don't feel like strangers - remained in my memory. It felt like the kernels of coloured corn that Ann gave me for Mark. Seeds for the future. 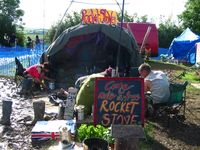 I'm writing this midsummer postcard in hindsight. I pocketed those seeds and now the corn is growing in our garden six weeks later. It's now Lughnasa, the traditional time of the harvest and gathering. Tin Village came and went and yet the essence of it still flourishes. Some of the crew are coming to the Uncivilisation Festival this month, and there will be a Tin Village at Sunrise Off-Grid too (though a slightly smaller version). I wished I could have stayed and helped dismantle the camp but Simon and the East Anglia crew were heading back that Monday. I would have liked to have had that experience, got to know everyone more, as well as feeling I had played my part in the hard task of construction.

Sometimes you have to go off-line, off-grid, out of your comfort zones, to get a sense of what is possible. I know now when push comes to shove people can work together in hard conditions and flourish. And when they do something beautiful can happen that you would not expect if you judged everything from the way things appear, from the outside. The people who will make the future work are not the people you think: the control people, the shiny people, the spiritual people. They are the activist people, smart, funny, edgy, generous, friendly, warrior-hearted. The people who are not afraid of the mud. Who are not afraid of the earth or each other, and who can still make a fire, come what may. 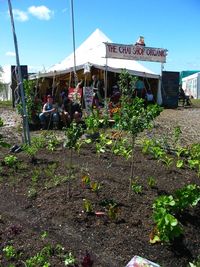 Sometimes you wait a long time for the story to make sense. I had a seminal moment when the sun finally came out at the end of the weekend and everyone was going home. I found a chair to sit in and put my face happily in the warmth and the light (at last!) and heard a girl's voice singing: I wanna see the sun, I wanna see the sun (at least that's what I thought she was saying).

"This is it!" I cried. "I wonder what CD that's from?" and went into the tent to find a real girl singing the song, and a familiar figure taking photographs.

"Aren't you the person who shot Transition 2.0?" I asked her when the set was finished. "Didn't we meet in Liverpool?"

"Yes," she said, "And this is Rebecca Mayes. She found an impromptu slot here and I said we just had to have the Transition song!"

You think the sun is a star, operating outside of us in a scientific impersonal way, but it's not. It is in all things. It's a creative, mysterious, self-organised. connective intelligence that operates through everything on earth. Many strands and shapes interlocking and working for the whole. It works through our hearts and our fiery spirits and we can get a sense of its extraordinary organisation when we break out of the camera oscura of our minds and get into the field. When we trust the people we are working with, when we let go of control and enter the collective. We have been kept seperate for aeons at the behest of forces that have nothing to do with right relations on earth. It's time we got back together again. It's time we got back into relationship.

Sometimes we get that chance. Now is the time.