when the left hand knows what the right hand is doing

Welcome to the third in our series based on The Transition Companion where the crew look at different Ingredients and Tools. This week we are considering Chapter 3: Connecting, which contains some of the themes we have focused on this year, including Working with the Council. Forming Local Networks has also inspired a regional series, which this autumn will see reports from working initiatives in London and Scotland. Stay tuned! 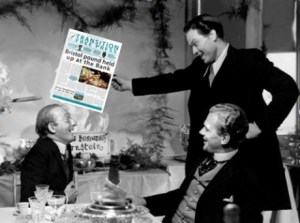 Meanwhile, I was planning to write about commun-ication today, which forms the main strand of this chapter (hard to connect without communication!). But reading the entries for Oral Histories and The Role of Storytelling, I realise these are very precise exercises which I know little about. Both the initiatives I have been in have been more on the ground than teaching or workshop-based. I do know about writing stories that are embedded in the future, which was the basis for a real newspaper, the Transition Free Press. And I know about speaking with older people about the neighbourhood and getting a deeper sense in time, a sense of a culture and economy based on life without fossil fuels - though only in a non-structured context.

I could write about how hard it is to break the spell of the media, and how listening to people is key to breaking out of our chronic individualism, but to be fair to the book these ingredients are not ones that we have used in our Transition kitchens in Norwich and Bungay. The tool I know however like the back of my hand is Street-by-street behaviour change, which we called Transition Circles. I would say that this was perhaps the most influential and essential enterprise I have taken part in (apart from Working in Groups). Here's our precis in the Companion:

TRANSITION IN ACTION: TRANSITION NORWICH CIRCLES
There are other approaches similar to Transition Streets that have also proved to be very effective. Transition Norwich started a less formal approach called ‘Transition Circles’. In this model, small groups of people meet, usually over a meal, and start with looking at individual actions, creating a space in which people can talk in a real way about lifestyle changes, and are able to support and encourage each other to take the first steps.
The Circles came out of a second wave in the initiative, called Transition Norwich 2.0 (TN2) in 2009, in which a core group of Transitioners made a decision to cut their carbon emissions by half the national average in the key areas of home energy, transport, food and ‘stuff’. The second motivation for TN2 was to start up intentional communities in different neighbourhoods, to bring people together to create and celebrate a low-carbon culture.
The groups have been meeting regularly, and have since broadened their focus to look at larger practical initiatives, e.g. wholefood-buying co-ops. For Transition Norwich, personal carbon reduction is a defining element of what Transition looks like in an urban context.

To bring personal carbon reduction changed the dance completely because it challenged us to be real about the changes required to downshift. It changed the conversations between us. Transition groups sometimes meet with the understanding that somewhere in the woolly future "the community" will engage in energy descent. However when you put your own highly consumptive lives under the microscope, the kind of double think and denial that allows Transitioners to talk passionately, for example, about peak oil but still take planes, could no longer happen. 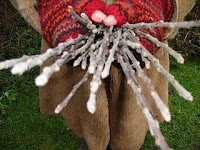 In Norwich we ran a series of Carbon Conversations alongside the Transition Circles during 2009-11 and personal downshift became something most of the movers and shakers were engaged in. It formed the basis for our discussion, our measure and a way of life that we celebrated in all its rich detail. It inspired our Low-Carbon Life blog (now in its third year), and the Low Carbon Cookbook. We didn't see it as behaviour change, we saw it as culture change, something we were creating together. It was another story about the world we could tell. And we told everyone we met. Look here we are in old coats, on the bus, eating beetroot, chopping firewood!

I was in the Strangers' Circle for about six months and in that time radically reduced the energy I used, the waste I produced, relocalised my larder, joined a wholefood coop, learned to share a car, stopped buying stuff apart from essentials. Two years later those decisions carry on being made: reduce, reuse, recycle, repair. We have not put the heating back on. We eat almost entirely seasonally. This year I haven't bought any clothes. I'm not thinking about "carbon reduction" anymore, or even writing about it: it's become embedded in the everyday fabric of my life and continues to affect everything I do and every conversation I have.

The high aims that we had for the Circles to spread around the city did not happen, but as speakers for Transition we became real about what we were saying. That has its own homeopathic effect within the living breathing world. We live in a mind-based culture which is happy with the abstract, with words rather than actions. We can dismiss billions of strangers by talking blithely about "too many people on the planet" and yet be unable to face the real-life death of a close friend. We are happy with the theories of Transition but do not necessarily engage in what it takes.

One of the functions of communication is to allow people to speak from their true beings and from their experience and to find a common ground, and for that we have to listen. We spent those winter months 2009-10 when the four pioneer Circles were up and running, talking in a small group about our everyday struggles to live a more frugal and respectful life-style, one that was kinder to the planet and to the people we would never meet who made it possible. It was hard going because we had to face our own denial in each other's front rooms, or around the kitchen table. We had to listen to difficult things and not shut down. Allow our resistances and resentments to be there in the alchemical space of the room. We had to know that this was everyone's shared experience, one way or another. We didn't talk in the abstract: we looked at electricity bills, car logs and shopping lists. We confessed to supermarket habits, having hot baths, driving too much. And then we acted on our findings and feeling during the following months. 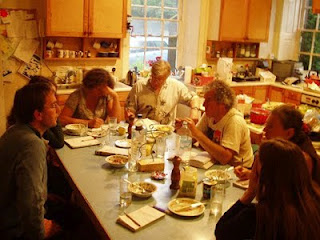 Maybe one of the stories we need to tell each other is that every-thing in Tran-sition goes through a process. Stories allow you to look back and treasure everything with what Roberto Calasso calls the "douceur of time". Just because a project isn't still current, or established, or a social enterprise, or famous in some way, doesn't mean it was a failure. The Circles were a huge success in that they broke a pattern, taught us clarity and generosity and endurance, and opened a rich seam of stories that enabled, for example, the Social Reporting Project to come into being and gave Norwich FarmShare its cultural backing. For Transition to work there have to be stories - real stories, real experiences - heart-warming testimonies about the struggles and rewards of doing downshift, not scientific graphs and behaviour mananagment. For that as we need real storytellers, people who are prepared to stand by the words they speak and write, and tell it how it is right now - not how it should be or was once long ago.

We had a lot of fun too especially sharing the meals (we were all cooks) and there was this sense that we were not engaged in a programme or teaching, but pioneering something that people hadn't done before. No one was in charge. We were all of us in the dark. No one knew anymore than anyone else and that made our moves exciting and real. It connected us in a way that still, years later, makes sense of what we do, even though most of us no longer see each other and the initiative is no longer up and running as it once was. The Circles were a way-though. I don't think I would be where I am now without having take part in them. So this is a recognition of that and a thank you too, to all the people I sailed with on that powerdown journey.

Because those storytellers are not the oral historians in our community, or the journalists in the conventional media. They are us.

Images: all banners from reports on Transition Circles and Carbon Conversations 200-2011 in Transition Norwich News; Hold the Front Page, Transition Culture; colleciting apple grafts and fingerless gloves and the Stranger's Circles discussion on Resilience in This Low Carbon Life.
Posted by Charlotte Du Cann at 06:31