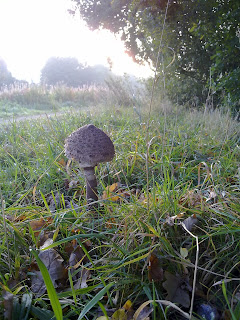 One of the greatest gifts of Transition is rediscovering the simple joys of doing seasonal things together - cooking, cycling, swimming in the sea, having a picnic. They bring sense and meaning into everything we do. Nothing though is quite as delightful and satisfying as foraging - going out into the wild territories and finding stuff to bring home and eat. This Spring the cookbook was all about leaves and energising wild salads, the Summer about flowers and refreshing drinks, but as Autumn stormed in our focus switched to the fruits of the hedgerows. We set out into the lanes and commons collecting berries, nuts and roots.

In Sustainable Bungay we served foraged blackberries at our Happy Mondays Mexican fiesta and talked about Autumn Berry tonics made with sea buckthorn, elderberries and rosehips at our September Plants for Life workshop. 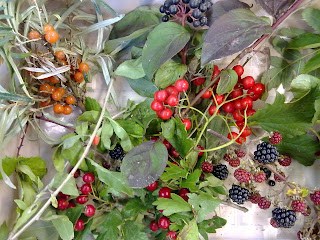 Our wild kitchen discovery of 2012 has been hawthorn leather. Here is Mark's first sculptural attempt. The second batch sweetened with apple worked a treat. Medicine for the heart and stomach. 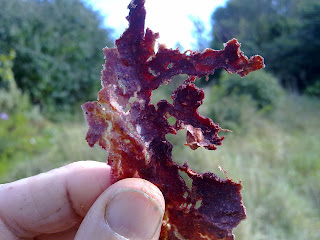 Nothing, however, beats mushrooming. 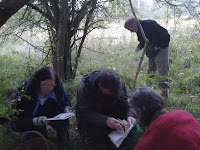 This Sunday Josiah, Nick, Janet, Mark and I set out at sunrise to Outney Common in search of breakfast. It was fairly slim pickings but a great morning's foray. We found oak milk caps under the trees and parasols along the path, alongside ghosts of the summer meadowsweet and a bright blue patch of devils' scabious. The river Waveney winds through the dry and wet territory of the common, like a slow and friendly snake. One of the best swimming holes in the valley is down here. 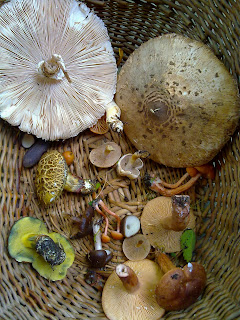 "Usually you find the best mushrooms at the last minute," said Josiah as we crossed the footbridge home by the massive distribution centre of Clay's printing works. And true to form we did. There on the green under the lime trees were several fairy rings and two cracked boletes. Oh, and a sign saying Help Yourself to windfall cox apples. Janet filled her basket. 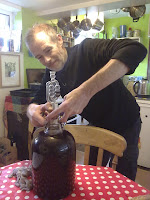 This weekend Nick will be showing Low Carbon cooks from Norwich and Bungay how to make fruit wines and root beers. He's planning to demonstrate his famous late raspberry wine in three stages and also how to start off a dandelion and burdock beer. Stay tuned for the write up next week.

Meanwhile if you would like to join the TN blog team, or come and celebrate our third birthday tomorrow with us and discuss the future, do swing by the Bicycle Cafe at 6.30pm. Come and have a dance too at the Keir Hardie Hall, starting at 8pm. Hope to see you there!
Posted by Charlotte Du Cann at 10:42