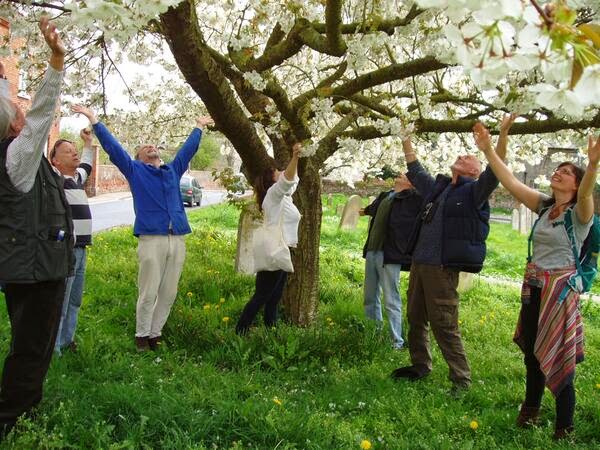 A piece about writers and belonging originally written during a week on Place Making and Neighbourhood for the Social Reporting Project, May Day 2012 (a bit early I know but in 2014 the bluebells - and cherries - are already out . . .)

Right now at Geldeston Locks Rita is sitting down with the crew to eat breakfast after a hard hour’s dancing in the rain and wind. We’ve just come in soaked from walking across the barley fields, waiting under the oak and hawthorn for the sun to rise (invisibly). Outside the birds are singing (wildly). The black poplar leaves are unfurling (like tongues of fire). The heavenly scent of alexander flowers and bluebells is in the air. We’re all still up at daybreak, in spite of everything, still here.

Most people are asleep in their houses. Maybe they don’t remember it’s May Day, or know why children on the greens of England are dancing round a birch tree. Still the Spring pushes the leaves out of dry wood, pours forth her beauty in the woods and hedgerows, out there, down the lane, in the neighbourhood. And true to this moment, to the revolutionary nature of the day, I’m breaking form. We are commanded, as social reporters, to be writing about our local initiatives, but I feel something collective has not yet been explored in Transition. It feels urgent, planetary, larger than all our projects and yet underpins them all. Bear with me. 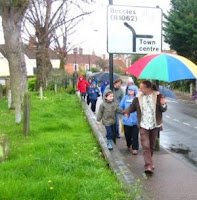 The myth of community

It was Susie Hargus who first mentioned it. We were driving down the freeway in St. Paul Minnesota and she said: This road really split the community. And I looked at her, nonplussed. She was an artist and a dreamer and the crowd of unknown people who lived in her district hadn’t, up to that point, figured in anywhere in our conversations.

After that I kept hearing the word. In Bisbee, Arizona, in Oxford, England and then everywhere I went in Transition. People with a dreamy look in their eye, uttering the special mantra that transcended everything. Community! Pretty soon I worked it out. “Community” didn’t mean people in the district, it meant a group of people like yourself, who loved you for who you were, who made you feel good. Imaginary friends and neighbours, ideal playmates in a rocky time. 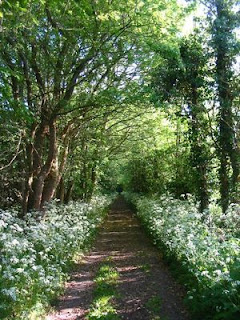 Maybe this is why the word Community alienated me. How can you be part of someone’s else’s idea? Or maybe it was because I had spent my bohemian youth with a band of fellow journalists, connected to a whole city (London), that I never yearned to belong to a set of people. It wasn’t until I returned to England after travelling that the word started to mean anything, as I found myself isolated from the human inhabitants in the lane where I now lived. An incomer, a renter and of no significance to the local rural, suburban and strangely, feudal society.

Writers, by their nature, are wary of traditional community, the status quo who judge and condemn any one who thinks out of the box, who pushes, like the Spring, for new life and liberty. What we love is neighbourhood and the pattern language of place. We love street trees and corner shops, we love the sun reflecting gold on the windows of the towerblock, the scent of rain on pavements, the local restaurant with its chairs outside, our conversations with market stall holders, the numbers of buses. This C2 bus I am catching now with Sarah Nicholl, that runs from Victoria Station to Parliament Hill Fields.

We love those names of places, our memories of journeys and meetings. Our bodies remember their curves and gradients, as we cycle towards the library, the office, the theatre, our feet remember street corners, canal paths, parks and bridges. My feet remember the way from Oxford Circus to Lexington Street, even though I haven’t walked through these back alleys for twenty years. I don’t have that network of media friends in London anymore, but I do have Transition. It’s a network too, of course, just one that is working for a different world. We’re on our way, Sarah and I, on this Spring night walking to Mildred’s to meet some of our Transition companions on the eve of a Peak Money conversation.

I haven’t been in Soho in a long long time, but in spite of all the changes I have gone though in that time, the changes the world has gone through, I look around the room and see it’s the same. These buildings have been here for centuries, hosting loud and boisterous conversations between people, the small rooms are rocking with words and laughter, the clattering of plates and chinking of glasses. It’s London. Fast, furious, communicating like mad with itself. I don’t live here anymore, and yet here I am. In my element. Home. 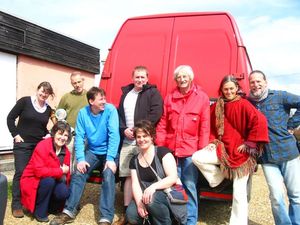 Making Myself (Our Self) at Home

What has this to do with Transition? Belonging is the core of everything. We have to be home first before we go anywhere near the future. Otherwise we will always be operating from the past as "non-belongers" -working from outside in, when we need to be working from inside out.

What I learned travelling is that belonging doesn’t depend on those alliances with friends or colleagues you once knew (or perhaps still know). It doesn’t depend on having a community you can call your own, or being tapped into the conventional circles made by institutions, by church, school, or family. Belonging is belonging to humanity, to the earth, knowing that how you act and move and give every day matters.

Belonging is loving the world wherever you are. It’s loving the city neighbourhood, it’s loving this country lane. It’s loving the plane trees of Hoxton Square, the damson trees in Philip and Irene’s garden, the rain as it slides down the window. It’s knowing that being in a place doesn’t depend on the people who live in the district, or what they think of you or you them. Belonging is something impersonal, and because it’s impersonal it’s more intimate, more generous than any idea of community. It’s feeling at home on a corner in Mexico City where I sit drinking my morning coffee, to the long road across America, edged with sunflowers, it’s belonging to the mountains and the desert, to the Thames, to the Ganges, to the California coastline, to this grey North Sea, with all its watery territories, all the tracks we make, the people and the animals and the birds, the indigenous blueprint of places, the vernacular of everywhere.

We can talk carbon emissions and climate change, we can talk community and Transition, we can think in numbers and statistics, tell our horror stories and hopeful visions, but nothing will change outwardly, the way we all wish it would (which is to say for real), unless we come from this kind of affection for the places we live in. Unless we break out of our “left brain” understanding of geography, class and history and start tapping into our “right hemisphere” collective lineage, connect with the people who have been speaking, singing, creating this pattern language for millennia. Everyone who keeps this sense of rootedness and fluidity alive in us all. Until we start belonging to the trees and the wind and feel our feet on the ground, at home with perfect strangers in all places, we are going nowhere. All our conversations – peak oil, peak money, peak everything – will be stuck within an old paradigm. Stuck in me and my idea of the world, separate from you. 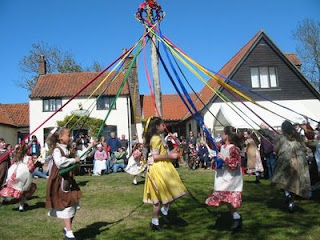 We have to know the physical world as our home territory, we have to see each other as we really are: native, indigenous to this earth. We have to know we are the bio-diversity we talk about. We are the heritage seeds of the future. That each of us holds a planetary form, shaped like the sun we cannot always see. A true form that is also a colour, a sound, a frequency we sense when we feel light, relaxed, in synch with everything and everyone in the neighbourhood. When we do Transition from that place, it’s happening. It’s happening in London, in East Anglia, in Pittsburgh, in Japan, wherever we are. That’s the moment when we know what we are doing on the planet, in each other’s company, when we wake up. The reason we keep dancing in the rain.

Merry May morning everyone!