The Heart is Another Country 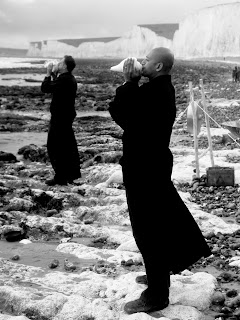 I have been writing a column called 'Life in Transition' for the magazine EarthLines since 2012. During these years, as one season has shifted into another, I have looked at the challenges that face an industrialised people in search of a wilder, kinder, more authentic way of being on the planet. This is my last column You can see all posts under the EarthLines label).

“Can we speak with you for a moment?” asked the girl with blond hair sitting at the table outside the Betsey Trotwood. It’s midwinter and we have just been at a Dark Mountain launch at the literature house Free Word in Clerkenwell. “We loved the way you started your talk about being a know-it-all journalist in London when you were 35. We’re 35!”


I looked at them, two young city women, smart, sassy, with sharp tailoring and a curiousity that would never be satisfied by the whirling world of Farringdon Road. I realised I was talking to myself 25 years ago. “You have to go!” I laughed. “You won’t regret it.”


25 years ago I had interviewed a Native American activist called Dennis Banks. He was running to Russia with a band of young warriors to deliver a message of peace. I had persuaded the news desk it was a good story.

“Why are you running?” I asked him.
“I run to remind the world the eagle is still the eagle and the owl is still the owl.” he told me.
"Does the world want to know?” I asked.
He looked at me, French designer jacket, Japanese tape recorder, London attitude.

"It doesn’t matter who gets the message.” he replied. “What matters is that the message is delivered." "Well," I said. "Thousands of people will read this tomorrow."

But the fact was they didn’t. Because the story was never published (the photographer didn’t get a good picture). But I got the message anyway. Six months later I was on the road to Mexico.


At some point all our empires end. The ones that hold dominion inside us, the corporate machine that strides the Earth, the parts we play to keep it going. The encounter seemed a small thing at the time. But it wasn’t. It changed my whole world. 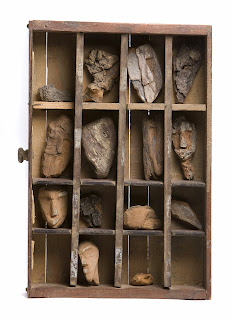 There is a small hexagonal space in the Natural History museum in Oxford in the rocks and minerals department. When you step inside it is totally dark, except for the glow emanating from several crystalline chunks in a psychedelic host of colours. And there is a switch. When you flick it something extraordinary happens: a totally different set of colours lights up. The minerals emit fluoresecent light according to the wave lengths of UV light they are exposed to. The switch changes the frequency.


In the Free Word theatre I am showcasing 30 images from the two recent Dark Mountain volumes. What is this man in a suit doing on a raft on a Swedish lake? I am asking the audience. Why is this woman’s face covered in a mask made from heritage wheat?

The images are modern but they are also archaic, rough, made from riverwood, roadkill and storm debris. They show us glaciers in Pataonia and broken glass in Walthamstow, the rain on a cherry tree in a gale on the Ligurian coast and a red door leading to a curious house in the Hampshire woods. They are paying attention in places where we do not, stopping the world so we can see inside its workings, so we can see what lies outside the city walls.

Art is like a strange attractor, I said, that breaks a limit cycle and brings chaos into play. When it comes to climate change we can talk about sustainability and resilience and finding A New Narrative. We discuss environmental and social justice – but still we are at the same table moving pieces on a chessboard in a losing game. The new story turns out to be just the old story only with different vocab. Sometimes though the barbarians come to the city and appear on the edge of our civilised lives with a message.


Sometimes that barbarian is you. 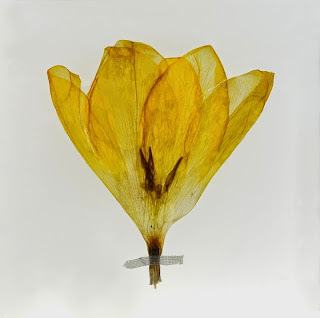 To see the Earth in new colours we have to divest ourselves of the world that is set to ruin it. When the Transition movement was launched its blueprint for energy descent created over a thousand initiatives worldwide and provided an intervention for communities stuck in the rigidity of the status quo. It gave people a chance to meet within an ecological frame for the future. However its essentially pragmatic nature meant those changes were only discussed in terms of our behaviours and attitude. What was not addressed was the inner divestment of an old world, or how we could create the kind of culture that could be stronger and more beautiful than the one built and maintained by fossil fuels.

In 1990 my life changed direction when I met a Native American activist. What I learned from Dennis Banks in that small encounter was that unless I had a land to belong to I would not have a message worth delivering. To find that territory I had to become a different kind of person, operating on another wavelength. When I later chanced upon a lecture about aboriginal dreamtime, I found that the mystery of life on Earth can be found in our ordinary dreams. When I met a road protester called Heather in Oxford, I discovered that the medicine of plants can be found in the weeds that grow outside your door, that there is living consciousness in every tree and flower.

In 2008 I found myself in a theatre with a small band of 30 people watching a film about peak oil. And afterwards, contrary to my expectation, I joined in the lively debate about life at the end of Empire. We will build the lifeboat together, we declared. It was the day I joined Transition. In Transition I got smart about the industrial-military complex and realised that the future was not just about me: it had to be about us. Breaking our individual silos was perhaps the most radical move any of us could make.

Each of these encounters blew the dimensions of my small world open. Each time I met someone who sparked something alight in me. But how do we flick the switch in the dark room as a collective? How do we change the frequency so that the low hostile hum of Empire is turned off and different parts of ourselves are lighted up?

How do we open to these encounters in a shrinking world? How can we move the conversation away from the game on the table to feel the currents of the underworld below our feet, to hear the spirit birds above our heads, when we are boxed in by language, by class, by prejudice, by untempered inner forces, when only the lucky and the rich hold the microphone and most of us feel dumbstruck? 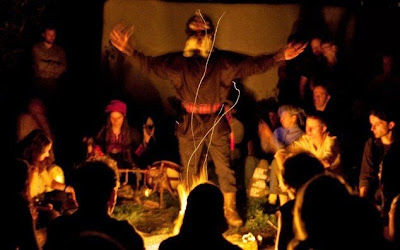 This year we jumped over the fire to welcome the new year in. Lucy sent us a bottle of vodka, three small glasses and some instructions. I built a firepit where Lucy’s caravan had once stood. The caravan has been a crucible for a book Lucy and I have been working on for the last two years. It’s called Playing for Time - Making Art as if The World Mattered.

The book details the work of 58 artists who convene under the umbrella of ‘transitional arts practice’. This is not the art you might find in galleries or theatres, but art that takes place in bandstands, libraries, beaches, burial grounds, mountain tops and community gardens. Collective and collaborative projects that help us break out and change lanes; that can, for example, bring a whole valley of people together in Cornwall, or track the nectar and pollen-bearing plants in a neighbourhood in London, that can curate a museum of waters from across the globe, or a rhythm to be played by people across continents, like Chinese whispers.

It was hard to stay here at first and not run away, and yet this is what our hearts told us when we listened: Make yourself at home. It was hard to eat seasonally, to turn off the heating. Live in time. Yet now I don’t want to leave, I don’t care if I have to wait another six months to taste tomatoes or strawberries. I don’t want winter to be summer anymore. Today the chard and radicchio shine all colours in the frost. I walk down the lane with a dead elm balanced on my shoulder. Ice cracks under my feet and moonlight bounces off the distant sea like a golden mirror.


What makes divestment bearable is the attention the artist and writer show with their practice and their celebration. How these things forge depth in a shallow time, how they wrest meaning and value in a culture governed by the dollar and the drone. They open the door to the worlds that shift under and beyond the table. They create spaces for other things to happen. For the switch to go on inside. For the people to still be the people.


We sat for a long time around the fire, elm and hawthorn twigs snapping in the dark. The fireworks of the town seemed to be happening in another dimension. We heard a deer bark, geese honk from the marsh. The stars turned overhead. When you jump at midnight, Lucy said, you shout: I give you my yellow paleness, and then back again: I take your fiery red. Then you drink a glass of vodka. When you are jumping, the people stamp their feet and cheer, and you can think of your brethren in Kabul doing the same.


I stamp my feet on the earth and laugh, as Mark leaps over the fire. From the oak trees down the lane the owls call out:


We give you our fiery red. 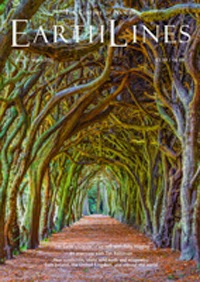 Playing for Time – Making Art as if the World Mattered by Lucy Neal is published by Oberon Books. I will be speaking with fellow editor Steve Wheeler about the Dark Mountain Project at 2 Degrees Festival on 3 June. Do come! The latest collection of Dark Mountain writing and art is available here.

Images: Calling out with Ansuman Biswas/Red Earth by Charlotte McPherson in Playing for Time; Anima by Daniel Mack (Dark Mountain 6); crocus from Honeyscribe by Amy Shelton (in PFT); storytelling by Tom Hirons at the last Uncivilisation Festival, 2013.
Posted by Charlotte Du Cann at 15:27