Coming Together in Resilience 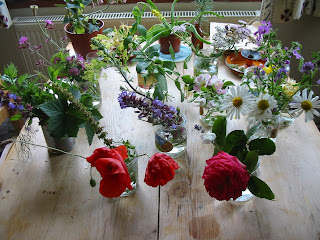 Today the trees are on fire. It's a moment that happens in November. All down our lane the great oaks are blazing gold, the hedges tipped with hawthorn and rosehip flames, the bracken rusty on the banks. At sunset the whole land glows amber, russet, crimson. If I could I'd fill this space with the sight and feel of it. For years I paid attention to these moments and these trees and flowers. Then last March my attention shifted, when, at the First Regional Gathering in Downham Market, I realised I was in Transition for real.

Resilience is one of the key words in Transition. It refers to the ability of an eco-system to withstand shock and hold together within radically different conditions. To invent ways of dealing with change. To evolve.

Last March Mark, Josiah and I interviewed Professor Martin Wolfe at his research farm, Wakelyns Agroforestry in Suffolk. The plant pathologist told us that it is the diversity of species working together that enables evolution to take place. He's developing what is known as Composite Cross Populations of wheat, organic wheat that will flourish in the kind of adversity that peak oil and climate change might bring (as well as providing the flour for the future local loaf in Norwich).

The strength of living systems depends on things, he told us, that cannot be measured by conventional agricultural science. Something Darwin first recognised as he observed the natural species-rich grassland around his house in Sussex: that the greater the diversity of species that existed in a place the greater its abundance.

The memory of how to thrive and be abundant in diverse conditions happens when many species work together. The ability to find solutions to the difficulties we face also depends on things that cannot be measured, or even recognised in a conventional and monocultural world.

Next week Mark my comrade-in-Transition for the last 19 years takes over this blog for a week. He doesn't like this picture of himself Josiah took at the last gathering, (with shared lunch and Open Space "laws"). But I think it captures the spirit of the times. You know he's speaking to you when you look at that picture. There's a wild fire coming through that's sparking something alive that has been forgotten for centuries. I've been hearing it in people's voices during the last two weeks, as I've been preparing a document about the 28 Transition initiatives that have sprung up in the Eastern Region over the last two years. Talking with people from the villages, market towns, cities and bio-regions of Bedfordshire, Cambridgeshire, Suffolk, Norfolk and Essex http://www.transitioncircleeast.blogspot.com/.

Tomorrow we're all meeting up at the Second Regional Gathering. It's also the day my first column for 17 years comes out in the EDP http://www.oneworldcolumn.org/ an article about Transition called Leaving the Pleasuredome. I've just become part of a co-operative of 6 writers and each week we appraise and encourage each others' work. This community blog works in the same way - with Jon Curran, John Heaser, Tully, Elena, Jane, Helen, Andy, Mark, myself and others who have yet to join us. It's how life works, how people work best -in co-operation, in collaboration, in communication - how we get to enjoy ourselves together on this rough and beautiful earth, And now facing the greatest challenge we have ever faced - the triple crunch that Transition has articulated so clearly - it's also how we stand together and evolve.

In life, for life. See you there! 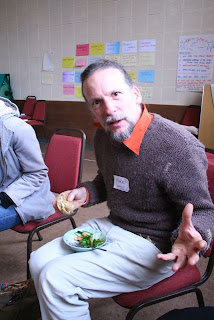 Above: Circle of summer flowers from the Midsummer Transition Party, 21 June 09 by Mark

Below: Mark in his famous brown jumper at the First Transition East Regional Gathering, Downham Market, March 7 09 by Josiah