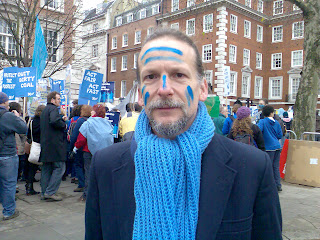 A crowd flowed over West- minster Bridge, so many, I had not thought death had undone so many I quoted to Mark. We were passing by the statue of Boudicca raising her spear towards Parliament as our fleet of East Anglian coaches charged onwards towards Hyde Park. We were about to take to the streets as a new kind of blue-faced tribe. Climate warriors battling not just with the industrial wastelands as they encroach upon the earth, but with the denial and apathy of the multitude, unwilling to look, comprehend, feel and respond to the urgent situation in which we find ourselves. 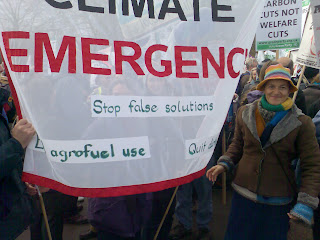 We had come to take part in The Wave, the biggest climate march in history, designed to bring attention to the planetary crisis now about to be discussed by the nations of the world at Copenhagen.At Speakers’ Corner the premise was clear. Climate change was not the only change on the agenda. Under the plane trees the speakers included MPs, Climate Camp organisers, campaigners against the third runway at Heathrow. All of them eloquent and fiery in their call to attention and the issues that brought us together on this day: fossil fuel depletion, resource wars, social justice, green jobs. "I have been speaking to the Native American people in Canada whose lands are being used for tar sands," declared the Liberal Democrat, "I have speaking to the people on the coast of Dorset where the oil tankers are waiting for the prices to rise"(as they are in East Anglia). 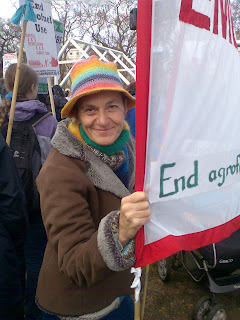 "It’s run on love ladies and gentlemen, it really is," said Nick Hutton, treasurer of Campaign Against Climate Change  who, with the Stop Climate Chaos Coalition, had organised The Wave.

As the helicopter roared overhead, the radical roots band, Seize the Day, sang about giving up flying: What will you do, what can we do? Don’t take my wings away.

Sweet Thames run softly till I end my song.

Grosvenor Square, historic starting point for all great marches, was filled on all sides with blue people: blue wigs, blue dragons, blue faces. We moved slowly and inexorably through Mayfair and down Piccadilly. My feet knew all these streets. I had walked them, cycled them, taken underground trains below them night and day, as a child, a lover and a journalist and now almost a stranger. I walked past magazine offices I once worked in, danced a jig to the SOAS samba band in front of Fortnum and Mason where my grandfather used to take me for tea. I knew the kinds of changes that were being required from a city-shaped people. It wasn’t just about turning down the thermostat, it was about giving up an exclusive way of seeing and experiencing the world. Letting whole histories, whole parts of yourself go and letting something else sing inside. 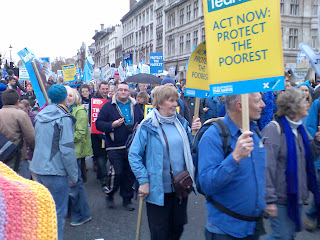 I wore a rainbow hat and stood between the statue of Winston Churchill and Big Ben and watched the crowd as it wound its way down Westminster, over Vauxhall Bridge, past Lambeth Palace and back again in a great aquamarine loop. The people had come from all over the country, from Southampton, Birmingham, Cardiff and Poole. There were people in Transition, people on cycles, grandmothers in blue hats, babies in shawls, monks and priests in habits, young anarchists dressed as bankers.

"You’re on a march", said the policeman to a young couple, "you’re supposed to be shouting!" "What do we hate? Climate change!" chimed some children melodiously in response. It was a big march but it was a mute march. The ready-made placards supplied by the Co-op and the various charities and NGOs said it all for us: Power to the Poor (Christian Aid), Act Fair, Act Fast (the Co-op), Our Climate in Our Hands (Cafod), Capitalism Means Crisis and Climate Chaos (Socialist Worker), Carbon cuts, Not Welfare Cuts (Green Party). The buildings stood impassively as they have stood for centuries. At three o’clock there was a great shout as we did The Wave all together, and then we started to go home.

It was hardly reported by the papers. A massive taking to the streets by 50,ooo people. Was that the media or was it us? Is it that we have no way of communicating the complexity of what is being discussed at Copenhagen? Is it that "the scientists" seem to hold all the data (or not) and the corporations all the power, that ordinary people, united in that moment by the colour blue, have nothing crucial to add? Or is that that the words themselves we are using are inadequate to express what we feel? All these well-spun, marketed, corporatised, psychological, tele-texted words? The demonstration had none of the raw angry edge I remembered from the 70s - strike marches or Anti-Nazi League gatherings. There were no police charges or wild breakouts. It was perfectly orchestrated, without an enemy in sight - unless you can count a bunch of buildings by a river as an enemy. 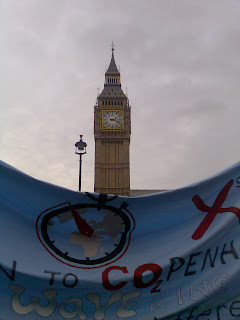 A woman once asked the Native Americans of central Canada what they could do to help solve the problems about their land. You could start by realising you are the problem, was the reply. How can you march against yourself? Your neighbour, your friend, your own children?

Something else is required of us that is far subtler and more intricate than a public demonstration that depends for its energy and impact on black and white, Us and Them antagonism. Something like the decision the singer made when she gave up flying and realised she couldn’t see her grandmother in America and her sister in Australia again. What people used to call a sacrifice. A giving up of what you love for life itself.

DA What have we given?

Whatever happens in the conference halls of Copenhagen as the minds and wills of the world’s governments argue about figures, this is the kind of change the planet is really requiring us to undergo. A radical shift of attention, a sea-change. A decision that can only be made deep within the chambers of the heart.