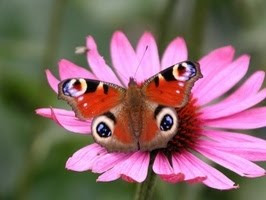 Last month I spoke to 29 Transition initiatives across the East of England and asked them how Transition was going in their villages, towns and cities, how they began, what projects they were engaged in, what their successes were, what difficulties they faced. Some these difficulties I catalogued in a paper called Transition Troubleshooting http://transitionculture.org/wp-content/uploads/Transition-East-Roundup-Edit.pdf. Later when we met up at the Diss Gathering we wrote our troubles on the wall and then sat down with one another to try and work out a way to proceed. http://www.transitioneast.net/

Looking at these lists you can see the overwhelming difficulties the Transition movement faces lie not with the outside world, but within with the meetings on which Transition culture is based. And now in Copenhagen, “the biggest meeting in history”, where the future of humanity’s culture is based. The question we began to ask ourselves was: are these meetings really a consensus between everyone present? Or are they simply a means whereby agendas that suit the most powerful in the room are agreed?
Or is something going on in these meetings that we haven’t woken up to yet? Naresh Giangrande in his first post from Copenhagen on 11 December http://www.transitionculture.org/ is bewildered and downhearted to see that, in spite of the world’s scientists agreeing over climate change, the rich and powerful are not listening to them.
My hope, my optimism springs from my home, Totnes and all the other Transition initiatives. It springs from the desire and that is apparent here at the people’s conference to create a sustainable world. I feel no hope yet from COP 15. The road from here takes me home.
The problem with the Rich and Powerful is that they are trained to have no fellow-feeling in order to personify huge figures of authority, like small autistic gods. They have been force-fed vast amounts of attention and live in constant terror of being humiliated and annihilated when that attention is removed. As a result they control all reality around them and refuse to acknowledge what is staring at them in the face. How to find a way out of this shut-down will not necessarily be found in the conference halls of Copenhagen.
You might find it somewhere else in the city. Hans Christian Andersen would have no difficulty recognising the situation all of us face. The deaf and the heartless are under the spell of the Snow Queen, he would say. In the story he tells about a sister who releases her brother from enchantment, the tale begins before the children are born, with a “troll mirror” that shatters and scatters the earth. The mirror distorts the world and gives the power of the negative to all those who gaze upon it. When a splinter enters Kai’s eye he falls under the spell of the Snow Queen and disappears from the city. Gerda sets out on a difficult journey through the winter landscape to find him, frozen stiff, on a lake known as The Mirror of Reason.
How do you break a spell? The industrial trance that holds us all captive? The fairy story is clear on the matter. By seeing and feeling who is in front of your eyes. By remembering your heart.

Though the grand illusions of the Western World are controlled by the rich and the powerful, life on earth is underpinned by quite a different story. This year four of us from the Transition Circles– myself, Mark, Helen and Alex - took part in a project called The Dreaming of Norwich and this video of butterflies amongst the buddleia was painted and filmed by Helen. 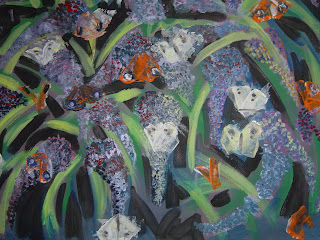 http://www.youtube.com/watch?v=WTkHVM-1PTE
We had seen the flowers as we went walkabout in the city one Saturday in July. They flourished in amongst all the cracks of the city walls, great fragrant spikes of deep purple and lilac, in bridges, carparks and wastegrounds. We were following the contours of one of the three rivers that flow in and about the centre, dipping our feet in the cool water, skimmed by emerald dragonflies. 2009 was a good year for insects, especially butterflies. One Saturday in August I counted 2oo on the buddleia in my garden.
The butterfly is the universal expression of transformation because during its lifecycle it literally and dramatically changes its form. It’s an image that’s frequently used to describe the process of Transition. You can find it in books from The Great Turning by David Korten to Earthdance by the biologist, Elisabet Sahtouris. In 2007 interviewing a poet from Totnes called Matt Harvey (now the unofficial poet laureate of Transition) I learned a crucial fact about butterflies. Harvey had gone to a butterfly centre and it had transformed his life. He had not known that when the caterpillar enters the cocoon its body dissolves. It becomes liquid in order to transform itself into an imago. Suddenly I understood my life, the poet said. Everything had been collapsing all around me. Nothing was making sense, and I was falling apart. And suddenly I knew why. I was turning into a butterfly.
When the butterfly appears it signals profound change and a vast switch of direction. Its effect was first recognised in chaos theory, where it stands for the small factor that sparks off a radical transition within the non-linear systems of the planet - in the shapes of clouds, the flow of rivers, the populations of reindeer, when one element turns into another. A moment of turbulence in which limit cycles are broken, energy dissipates, structures shift and the planet keeps itself in a state known as far-from-equilibrium, so that life can happen. When the explorers of chaos theory looked at what kept everything in motion they found a shape they called the strange attractor. Drawn by the meteorologist, Edward Lorenz, it appeared like owl’s eyes, like a lemniscate. Most of all it looked like a pair of butterfly wings.
All outcomes of the weather patterns Lorenz discovered depend on initial conditions. Everything that occurs on the planet loops back to initial conditions. How things begin determines how they end - something that indigenous people have known forever, which is why they pay close attention to the creative acts of their ancestors and keep singing their songs, dancing their dances, telling their stories, dreaming their dream. Once upon a time . . . 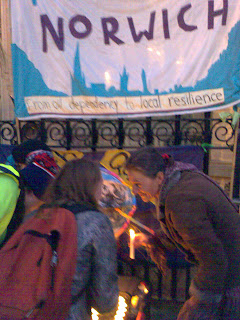 The old order which the Rich and Powerful represent, which the establishment in all its forms maintains (and our allegiances to them), is the greatest challenge we face in all our meetings, whether in Norwich or in Copenhagen. The transformative presence of the butterfly creates antagonism, stonewalling, denial, dissonance, terror and ridicule.
Above: Lighting a candle for Copenhagen and talking to Sam from Totnes at the 350 Vigil on the Millenium Plain on Saturday's International Day of Protest
The imaginal buds of the new butterfly fail when they first emerge: the great backlash of the caterpillar's immune system destroys all their fragile colour and beauty. At their second attempt however they are older and wiser. They learn to hold the new form of the butterfly by linking up with other buds.
The fact is the world has entered a state of turbulence and the caterpillar is fighting hard to hold on to its territory. Though the Rich and the Powerful and all who serve them resist the emergence of the butterfly, and appear immune to change, they are in fact trapped. They are, like Kai, trying to spell the word Eternity on the ice, heedless to the tears of the world as it tries to melt the hardness of their hearts. They have forgotten the way home. To remember they would have to look into their sisters’ eyes and feel. They know that by this act they would lose the power the mirror has given them and have to return to the humble life of their grandmother’s house in the quiet neighbourhood of Copenhagen.
The butterfly has no power. It carries the colours of the dreaming in its wings and in the shape these wings make in space and time it remembers the infinity present within all finite forms. To know the beauty of the earth, of the real Transition that is taking place we need to relinquish our devouring of the world and go inwards and dream. We have to re-imagine our lives. And as we let our former identities dissolve, our voracious small-minded caterpillar forms, we will start to know ourselves as we really are, to see each other in our true colours:
scarlet admiral
orange-tip
yellow brimstone,
green hairstreak
adonis blue
holly blue
purple emperor
white admiral
peacock.
Posted by Charlotte Du Cann at 16:34