Last winter I had a conversation with Jeppe Graugaard. We sat by the fire in my house and he switched on his tape recorder and though I felt bone-weary, bone-cold, exhausted by months of flu, I looked back at the track I had made over the last decades and found a kind of pattern there that made sense of things in a way I had not seen before. It sparked something alive. Although I have spent a great deal of my life interviewing people and hearing their stories, this was the first time anyone had sat down and asked me questions and was interested in the answers.This kind of attention is rare in our me-only, rush-rush world. About as rare as a ray of sun in that hard and difficult winter.

When Jeppe published our conversation in his blog a month later, just as Spring came, it was a revelation. In all honesty I can't remember saying any of this! I told him. He was now in a summerhouse in his native Denmark, writing up his Phd thesis about grassroots innovation, based on the Dark Mountain Project. I was amazed at how he had transcribed our talk almost verbatim, as he had with many other Dark Mountaineers, the thinkers, artists and activists who have helped shape this cultural network. Because I know exactly how many long painstaking hours that takes to do.

I had first met Jeppe briefly in 2009 at the first (and only) Arts and Culture meeting held by the Heart and Soul group upstairs at Take 5. We had decided to hold our first midsummer Transition party up at the Ranger's House on Mousehold Heath. He was about to research alternative currencies in Lewes and so never made it up there among the tents and trees.

But somehow our tracks crossed again: we met two years later at the Uncivilisation Festival and decided to start our own Dark Mountain Norwich group. When Rob Hopkins came to Norwich Jeppe wrote a piece about Transition for This Low Carbon Life called Reimagining the Future. He had come that winter weekend with Vanessa (who I had originally met at Occupy Norwich and asked to write for OneWorldcolumn) and we had all spoken at our Sustainable Bungay Give and Take Day about the Gift Economy. We had recently taught Trade classes - about time, about flowers, about communications and making - at the second prototype day for The Common Room at St Lawrence's Church (the third is happening today as I write). Tracks that were making a certain pattern in time and space.

Recently I took part in an on-line conversation about grassroots groups and I found myself realising that what I valued about Transition, what I valued about Dark Mountain, and all the groups I have connected with or written about were the networks of people and the shape and sense they made of my own life. Not necessarily my personal life, but a communal passage through the world that is part of an invisible pattern we can't always see. Those seemed to be more powerful and interesting than any other connections I could think if. And what I was saying in the thread was that the desire to belong to community of people in the way it is commonly understood, was not really my own desire, which is always to contribute to a radical cultural shift on this planet.

Sometimes the "communities" we think we are part of, those circles and clubs, don't necessarily make the meaningful shape that a network does. And some of the difficulties we encounter in such groups are caused by our wanting them to be our people, our family, our friends, when the kinds of people that are part of a network are not configured to provide that kind of emotional or material security. It's a freer and more dynamic exchange. We pop up in different places, in different guises over time. And when we meet, those meetings are treasured at a deep level, knowing they will not last for long. Those intense and focused conversations that happen at the edges in Transition are perhaps the most fruitful and enjoyable parts of our shared human experience. Certainly mine. 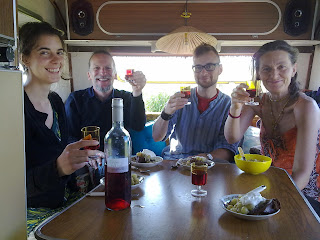 Today Jeppe is writing by a lake in Denmark and I am walking in a bluebell wood in England. We're meeting again in August at the fourth (and final) Uncivilisation Festival where Jeppe will be talking about Time Culture and I'll be talking about Rewilding the Self. I'm looking forward to that and all the conversations we'll be having around the fire under the stars.

Anyway here is the opening of our winter conversation. You can read the whole thing here.

JDG: I thought maybe a place to start was with something which you say in the beginning of your book 52 Flowers That Shook My World. Early on in the book you talk about ‘shifting allegiance’ away from civilisation towards the planet and this is something that has stuck with me. You say it happens on two levels: one is in the imagination, that’s the first step, and then it happens in the physical world when you start rearranging yourself in a way that can express that shift of allegiance. I thought maybe we could start with this, how that has turned out for you, going from living in London and being a fashion editor a long time ago to being here now. And I know that’s a very long journey and a big jump but maybe you can lay out what you think has been most important or what has been some of the most valuable stuff you learned from that process?

CDC: I am not a very linear person and I live in a very linear culture of the beginning-middle-and-end kind of stories that one is brought up with. But the stories that would grab me when I was young were the fairytales and the myths. I learnt myths very early on, the classical myths and Greek-Roman myths, which are the ones I know the best. Right from the age of seven or eight those were the things that really profoundly affected my imagination. And they don’t operate in beginning-middle-and-end. Although in some ways they use that sequence that’s not the world they operate in. They operate in this mythic, archaic dreamtime imagination, which is where I feel very much at home and which is the guiding principle of everything I write . . . .

This decade has been all about making myself at home in my own native land, which is a big practice and very hard to do in England. And part of that has been joining Transition where I’ve had to learn how to work with people and as a group in a different way. Talking about things we have been talking about today [in Sustainable Bungay] about the gift economy, about learning how to share, about learning how to give up individualism, which is a process in itself. Because even though you go travelling, you’re not necessarily working in a group. It’s still all about you. It could be about you and the great humanity or you and the great universe, you and the great planet, but it is not you and a bunch of people. Knowing the land as a people. That’s very different. That’s how we used to be.

For example, in Mexico when the Huichols walk to the mountain, they walk with the people. They are not walking as little, individual people trying to get their moment of enlightenment before they go back to the city. It’s a totally different thing: they are walking as a people. And most tribal and archaic people do this as a people, they don’t do it as individuals. You know, you might go and have your vision quest to find your name but you are coming back to the tribe, you are coming back to be one of the people, to be an integral part of it. So we’ve lost that. We’re trying to relearn it, I think. It’s on quite a humble level. Like doing things like ‘give and take’ today, community meals for fifty, it’s trying to get back to understanding what that’s like. That’s a much harder practice, I think . . . .

It has to be about heart. If you live a life governed by heart that is a different world to if you live a life governed by the rational mind. They are just different universes. So something that heart can feel and intuit, and intention being part of it, that has a currency and an agency that the rational doesn’t even recognise. It doesn’t know what you are talking about.

So, of course, if you sit down and do something with good intent - and you know that in your heart whether you have good intent or not – that has a power and agency that you cannot see but it will make all the difference. You can sit down with no intent and tick all the boxes and nothing will happen because you’ve got no good intent. Because it is not locked into what I would call the fabric of this world which we can’t see. The fabric of the world which we can’t see understands intention. That’s why some people do these strategic acts because they’re learning how to work with intention, so it makes sense within the fabric of the world.

So when they do one thing that echoes in all places… it’s like a hologram. You know, you do one thing in one tiny place and it goes in all places. That’s what I mean by making an intentional act. And that means everything, but the rational mind doesn’t understand that. It's a right [brain] hemisphere thing. We can’t even talk about it, really, but we know it. We understand it. We get a feeling for it. Transition sits down and goes “we need workshops, we need to get stats on that”. It’s all information. But that only goes so far. The point we are at is that we’ve got as far as facts and information can take us. And now something else has to kick in.

You can tell people “the Earth is coming to an end unless you do something”, well yeah, ok, that’s a piece of information. That’s not awareness. If you were aware of it you’d be going: “Right OK, what needs to be done?" That’s awareness. At least you are there, you’re going “OK, so now I know. So now I live in a different place”. That’s where Dark Mountain is. Which is why I like it. It doesn’t go in all guns blazing to try and sort everybody out. It sits on that very uncomfortable edge. It’s enough to be aware right now. Then we’ll see."