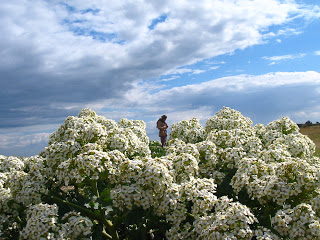 Five years ago I began a walk down the Eastern Seaboard. It was called The Sea Kale Project.

Originally the walk was going to be a springboard for a photographic exhibition and begin in Norfolk. In the end however it was the catalyst that drew me back into writing. First a small piece in a local magazine and then an abundance of journalistic blogs, principally about the Transition movement, during the following three years. Sea Kale also became the subject of the final chapter of 52 Flowers That Shook My World.

Tomorrow, in another time of shift, I will go with Mark to Sizewell beach, as we do each year, to visit the extraordinary community of wild, robust cabbages that flourish strangely and beautifully beside the nuclear power station. Here is a piece I wrote on This Low Carbon Life in 2011 in celebration:

Along the sandy dunes and shingle banks of the eastern seaboard there is a front line of wild plants, the ancestors of our allotments and fields - wild carrot, wild cabbage, sea beet, sea pea, sea kale, sea rocket, oraches, sorrel – and our medicine cabinets - wormwood and eyebright, sea buckthorn, sea holly, scurvy grass. Of all our ancient companions, the sea kale with its abundant flowers and rich detoxifying leaves is the largest and most impressive. Its tap root sinks deep into the shingle and holds fast in a rocky and uncertain time - the kind of plant that can weather a storm.

The plant marks a territory that runs along the shoreline from Norfolk to Kent. It’s a geographical, ecological territory, but also a place you can map in time, in the ways that make meaning of our presence on the planet since our forebears first ate those salty iron-rich leaves.

I came across the sea kale in Dungeness. I had gone there because of Derek Jarman. I had read his journals and noticed the flash of wild flowers in the text, as he struggled with the elements that howled through his shingle garden and to keep own tenuous thread to life. He had come in search of bluebells and found instead the bleak shore and the sea-kale that grew beside the nuclear power station. It was a singular territory that he made his own: wind-broken, austere, at the end of the line.

We had, like the artist, driven out of the city at bluebell time and found the crambe's crinkly purple leaves pushing through the stones. We had been travelling and were looking for a place to live. We walked past the black fisherman’s hut and its now-deserted garden, sat amongst the flowering dwarf blackthorn and crab apple. As we drove away, I looked back and the familiar mosaic of marsh and sky and sea sparked something in me. It was the memory of somewhere I used to know. A certain strand of my life that began when I was a child in Sandwich Bay and Felixstowe.

When we settled in Suffolk Mark and I began an open dialogue with the wild places along the coast, following a practice we had developed working with dreams and medicinal plants – visiting, holding a discourse within the territory, cohering our findings, keeping a creative log. It had become clear that for the future to happen we needed to be realigned with the natural systems and to recover our aboriginal ability to speak with the earth. How could we do this in our native land?

The dialogue began with a question: Who is this self in this territory? How can we communicate in an intelligent and vigorous way? What effect does the land, its moods, rhythms, creatures, weather, have on our imaginations, on our memories, on our realignment? 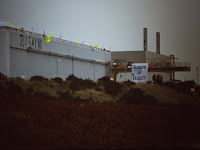 In 2008 we began a project that mapped the mosaic of eco-systems and their relationship with the human settlements along this shifting coastline. We named the project after the study seakale communities. Having this kind of dialogue means you don’t walk the track you choose. You encounter what is there. going out without a plan, meeting what crosses your path. Not just the beautiful, but also the difficult. We began just as the sea asters were setting seed n the marshes. On November 9 there was a massive storm surge. A powerful northeasterly wind ran against the high tide and the estuaries flooded their banks. We ran out of our houses and stood by the shore as the rivers merged with the sea and swamped the houses down at Blackshore harbour.

After the flood people everywhere began speaking about how to protect the land. Small bands collected together, stacked sandbags against the river wall, spoke out for the birds and the spirit of the place.

“Just a few cows”, we were told by the greysuited men from the Environment Agency in Reydon village hall. The agency were refusing to mend the broken banks of the Blyth as the government announced its retreat back to the metropolis. 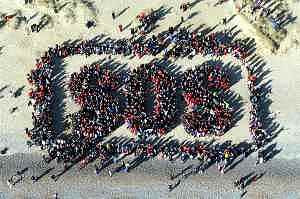 This was the time I found myself talking to Charles Clover, environment editor of the Daily Telegraph, our paths crossing after 25 years. He was telling me about the fish in the ocean he has spent his life defending, and a book he had written called The End of the Line. I told him what was happening down by the sea’s mouth. The agency was abandoning all the defences of the rivers and their harbours along the territory of the sea kale – the Blyth, the Ore, the Alde, the Deben. It was business as usual in the hotels in town, down at the pier, at the fish shop (The show must go on!) but some of us were beginning to ask why.

"They are going to take everything!" he said.

We walked the coast line from the statue of Neptune at Lowestoft, towards the Martello tower of Aldeburgh, from November to the following late summer. We stood on the beaches with 1700 others making a human SOS protest at Walberswick, watched an adder slither by through the sea peas as the police and activists outwitted each other at Sizewell power station, watched the sky burn as the reeds caught fire at Easton Bavents.

We swam in the ocean, with the seals, in the high waves, watched the sea become glass-green, pewter, azure, opal, bruised, mad with foam, tipped with fire. We swam in the wake of Roger Deakin, and walked in the footsteps of WG Sebald. Above us the sky raced with clouds, the wind blew sharp and salt, and warm, scented with heather, hail clattered on our heads. The sands shone silver, the cliffs flashed gold. The land pulsed with light, We pocketed treasures: sea coal, sea peat, a glass bead, a worn kitchen tile, an oyster shell, a deer skull from the tumulus at Dunwich at winter solstice. The sand martins departed their cliff dwellings, the barnacle geese arrived, the starlings rose like spectres over the marshes. Stags roared in the reeds. Seasons came and went. In the mornings standing at my window, I would see the sea like a shining band on the horizon, like a mirror. It’s a good day, I would say to Mark. Let’s go out. 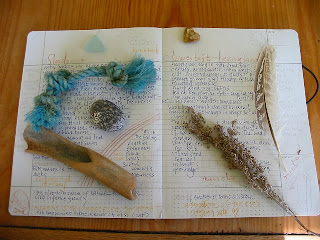 Today is such a day. And I’m writing about this project, about the resilient sea kale, because you notice in a droughted spring, it’s the plants with strong tap roots that flourish. It’s the tap root that keeps us alive. To belong you need a story, and to have a story you need a territory. You need a strong tap root to keep you anchored in a hard time. Sometimes the territory you find yourself in is not the place where you think you belong. It is not the lovely bluebell wood, or the rose garden where you sit alone with your thoughts. It’s not a tropical ocean or an Aegean island cove. It’s a windy English beach with people and houses and oil tankers on the horizon, where you encounter a thousand difficult questions about power and nature and exploitation. And the story you need now is not the story you were born with; it’s a story you have to discover, that you are challenged to go walkabout and find.

Part of me when I began the project wanted to stay on that wild ecstatic shoreline with the flowers, with the birdsfoot trefoil and centaury and harebell, to put all my attention on birds and stones and light, to keep hold of the outsider position of the artist and dreamer, but that shoreline kept taking me to the people, to face those awkward questions: to the protesters at Sizewell, to the campaigners in the village halls. It took me back into journalism as I found myself writing an article on the project for a local community magazine, the first I had published in 2o years. It didn't take me to paradise, it took me straight into the heart of the struggle. 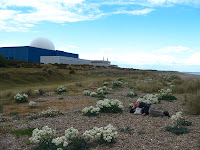 It took me back into society, into Transition, to the place where we all meet, the place at the end of the line, at the edge of the narrow land, England, at a point in time where we need to come to certain decisions about the future. Decisions and meeting places I'll be writing about this week with some of the people who have crossed my path.