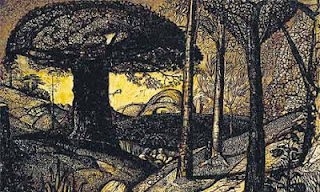 There is a postcard downstairs from the Ashmolean Museum. It's the cornerstone of a noticeboard with pictures of plants and places I worked amongst over a decade ago. It sits between Dr Bach's garden in a village in Oxfordshire and a saguaro cactus on Saguaro-Juniper covenant land in Arizona. All the pictures tell a story. Each one is a small door into an earth I wish to remember and keep within me, so I don't forget where I am or what I am doing here.

When I was young, I spent many rainy afternoons in the city galleries looking at pictures, and in many ways I learned my craft as a writer, by describing these canvases and becoming fluent in the cultural knowledge they held within their masterly pen and brush strokes. Some of this was about observation, learning how to communicate what I saw and gave value to, but some of it was about the mysterious art of perception, a sensibility that enables you to gaze deep beyond the surface of things. I looked into the gloomy green-tinged faces of Spanish saints, the laughing sun-dappled revellers of Paris, long before I went to these places and saw these people for real. You could say that looking at art trained me to pay attention to the real thing when I stumbled upon it in the streets of Montmartre, or Madrid. For a while the ability to notice the folds in a Florentine angel's dress, or the lace on a Dutch burgher's cloak, made me a good fashion editor when I grew up. But not all art taught me to ply my trade in the Empire, about the seductive nature of possessions and power that has made all Marxist critics despair since Roland Barthes. Not all pictures the artists painted increased the vanity of their patrons. Not all roads lead to Rome. 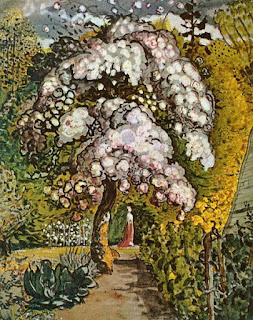 One of those rainy days I found myself in front of a small painting in an exhibition about English landscape, and something unusual happened. Instead of stepping back and observing, I stepped into its world. It was a painting by Samuel Palmer of a small country scene, set in the Kent I had once glimpsed as a child. Instead of a torrent of words that usually came in these moments, there was a silence. Nothing took place, except a feeling, as if the ground were moving under my feet. As if I were standing in the painting itself and could feel the trees breathing all around me.

In the following room, the same feeling came to me as I stood in front of Paul Nash and his luminescent paintings of Oxfordshire hills. I can't remember the name of the show now, but it taught me something about the presence of land and something about lineage that has subtly influenced the relationships I have had with English art and writing since.

Palmer was influenced by Blake, and Paul Nash was influenced by Palmer. There was a lineage between them there I could see and feel, and even though I was educated to observe landscape as the background to historical events, or as the view from a grand property, these places remained remote from my own experience. Although I could, in the manner of that once-hungry adolescent, discuss Palmer in the context of the School of Ancients and the pastoral, and argue how the Romantics were escapists from a geo-political reality, Palmer acted on another part of my intelligence entirely. His small paintings showed a real place that crossed over into the imagination: bright clouds, large moons, everything in abundance and brimming with harvest, even though this idyll was threatened by the Industrial Revolution then, as much as it is now. They gave a sense there were other things at play, a blueprint within the land itself that, no matter what happened to it, was always there, in the tree moving and changing, in ordinary things. That it would only take a change of sensibility in ourselves to rediscover. 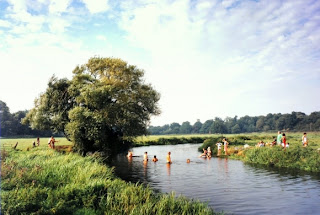 When I was 35 I threw away and burned all the note- books and diaries I had ever written in those city years and went on the road. A few things I kept however in a wicker picnic basket, that I sometimes collected from someone's garage, or a lockup, and looked through when I was passing through London.

Amongst these small possession were two postcards from my gallery-haunting years. One a sepia ink drawing by Samuel Palmer and the other a painting by Paul Nash of Wittenham Clumps. I couldn't tell you what I felt in those worlds, except that it felt like an England, a place that I belonged to and hoped would always be there. A place I could return to. This England was a round, warm, benign place, that was at once mys- terious, intimate and real, its dusk and shadows, full of sunlight and moonlight, a door through to different time. A landscape in which people, sitting, walking or working, had a place. 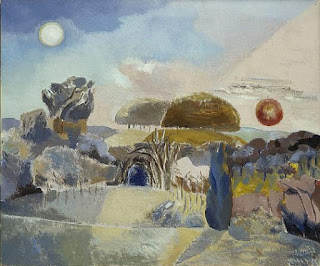 The new cover for Dark Mountain 4 is a lovely painting inspired by Samuel Palmer, and I realised that I had kept that postcard all these years, in that wicker basket and in the corner of my room, for a reason. Because it was the first painting I came across that made me feel at home in my own country.

Our perception of the world is inherited and honed, as mine was by the landscapes and interiors of the elite classes, by the Gainsborough drawing rooms, by the stables of Stubbs horses - a land and a house and view, always owned by other people. But sometimes you stumble into another room by accident and realise this is not the England you recognised with the part of yourself that used to be called the soul. The feeling, breathing, imaginative relationship with land when you are part of it, as much as it is part of you. Palmer shows you that this world is common and belongs to you and the people who work within it, who take time to pause amongst the corn. You are no longer the lonely observer in a city gallery. You are immersed in another country. The painting did something that none of the landscapes of Turner and Constable ever had: it set up a desire. 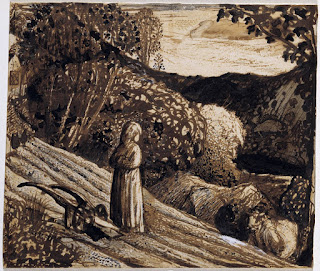 This morning I got up before sunrise and sat beneath an oak. Even though East Anglia does not have the rounded contours and hills of Shoreham, everything in the neighbourhood you could find in Palmer's world: the apple tree laden with blossom in a quiet garden, the winding lane, the hare, the sheep, the great harvest moon swinging above the fields of barley. You could see this place through political or historical eyes, as a landowner, or as a dispossessed, deracinated people - a cruel and unfair England. Or you could see it through scientific eyes, the eyes of a disappointed environmentalist, noticing the dead poisoned soil and razed hedgerows, the threatened ash, the disappearing songbird.

Or you can see it as an artist and a writer and notice the round beauty inherent in all its forms. You could hear the blackbird singing and the wren, feel the soft South wind soughing through the leaves, the scent of summer rain. the land that is always here, rooted in deep time.

This evening I walked with ten people along the River Waveney that loops around Bungay common. At one point I jumped into the river and swum amongst the damselflies and yellow lilies, so was behind the rest. As I looked in front of me, I saw the people in a line walking through the long water meadow grass on a midsummer evening and as I went to join them I thought about what I would write for this blog, why I think art matters, and writing matters. Why recognising the link between a line of people in a Palmer painting in 1830 and one that takes place in front your eyes in 2013 matters. Because if the writer can take us out of the city, back to the place where we belong, where we become part of the living, breathing planet, we will have done our best work. Because a people who are connected to the earth, in time, will stand by it and by each other. 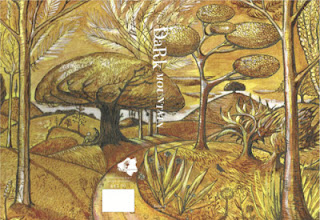 When I stumbled upon Dark Mountain, as I had once stumbled upon Samuel Palmer, something sparked inside. I recognised a certain lineage in the England that people were writing about -  painting, scything, making sheep hurdles - artists who sat under trees before sunrise (though now perhaps with their laptops) and why mysteriously it attracts so many people and inspires them to create (so much so that there are two Dark Mountain collections this year). Because we are holding out for an earth we know we belong to, by virtue of being alive in this form. Because somewhere in the place where there are no words, just a feeling, we are holding open a door . . .

Dark Mountain 4 is now available to order or by annual subscription (2 volumes).