Flight of the Butterflies 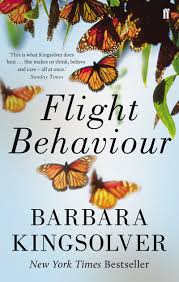 As the IEA reports ever-increasing carbon emissions, and Britain's environment minister denies any change in the climate in the last 17 years, what is the response of the truly awake person in the current cultural dissonance? In the summer issue of the radical grassroots magazine,  STIR. I wrote a review of Barbara Kingsolver's novel, Flight Behaviour, the latest 'cli-fi' book that look squarely at our present crisis and whose main protagonist is one of the most extraordinary creatures on earth.

In many ways dystopias are easier to write than a realist fiction that can look at the awesome forces that are out of kilter on the earth. Most books would rather put their imaginative attention on a post-collapse world, than face the gritty problems of a family or community living out the consequences of neo-liberalism and a globalised industrial culture. How can you create a plot when the conventional “bad guys” – those who wield corporate power - have become invisible? How can you find empathy for people who appear as ignorant victims of circumstance and stand in their home territories, witness to weird weather and species extinction. - subjects which seem better handled by the deeper and more metaphysical forms of poetry, or by non-fiction, unconstrained by a linear storyline?

Although the heroine of Flight Behaviour, Dellarobbia Turnbow, is a far cry from Madame Bovary and Anna Karenina, this is a classic tale of a trapped woman yearning to transform and break free from a near-impossible situation. What distinguishes it from these works and the thousands of romances built around the same theme is its mighty big subtext: climate change.

Barbara Kingsolver is known to tackle big subjects in her novels — sometimes successfully, sometimes not: women in the Arizona mine strike of 1983 in Holding the Line, sustainable food production in Animal, Vegetable, Mineral, Native American rights in Pigs in Heaven, Frida Kahlo and Leon Trotsky and the Mexican revolution in Lacuna, and, most famously, the impact of colonialism in the Congo told through the eyes of a missionary family in The Poisonwood Bible. All these themes, however, belong to the human and political realm.

Climate change is notoriously hard to talk about, belonging to what some call the 'supernarrative', the massive planetary shifts, that even though caused by human civilisation, we have limited capacity to control as individuals. Our sense of agency in our personal and social lives melts with the glaciers. History we can deal with, war, poverty, and even apocalypse, but eco-systems in feedback loops? These are non-human, non-linear realities normally assigned to science and to ecological campaigns. However human beings are not created from facts and figures, we are the creatures of story - the choices we make and the roads we take. Story is what makes meaning and gives value to our lives. 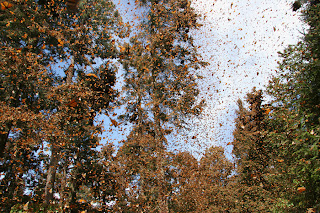 Role of the Novel

I don’t think it is a coincidence that the novel rose to prominence along with industrial civilisation, when people felt their lives to be largely shaped by human forces and therefore responsive to acts of individual will (Askay Ahuja reviewing the short story collection, I’m with the Bears)

In Flight Behaviour the central ecological dilemma takes place in a run-down sheep farm, in a run-down town where everyone has strange names, goes to church and every turn of the bad luck or weather is attributed to the Lord’s mysterious ways. The book is told from the point of view and in the language of 28 year-old Dellarobbia, who is stuck in a small house among the Southern Appalacian mountains with two small children and a husband she doesn’t love, dominated by harsh and judgemental in-laws. She has no money, no education and no prospects. Her neighbours’ son has cancer and all their peach trees and tomato plants have dissolved in the endless biblical rains. Small wonder you think she wants to throw it all away on an affair and run heedlessly up a mountain one day in ill-fitting boots.

Somewhere, after many long descriptions, the book takes a small flight of its own: the revelatory lake of fire Dellarobbia discovers on the mountain instead of her lover turns out to be millions of displaced overwintering Monarch butterflies. The hero of the book, a dusky well-mannered scientist, arrives from the Outside World with his assistants to live in a trailer on the Turnbow farm and record their destiny. His passion for these insects, his intelligence and grace, affects the smart but unschooled Dellarobbia and Preston, her son, and their world begins to open up. Will this encounter manifest into a relationship? Will the wooded hillside be logged? Will the butterflies survive the on-coming winter? Will redemption come to Feathertown? Will she herself take flight, like the flame-coloured butterflies in Spring? And then? So the old-fashioned devices of story telling kick in and you have to find out the outcome, though the prose does not get any easier for all that.

Kingsolver was originally a scientist and she applies her scientific eye not just to the insects undergoing numerous tests in Turnbow’s barn-laboratory —she puts their whole world under the microscope. Long drawn-out scenes in the local dollar and thrift stores tag every item on display; an exchange with an activist reveals that their “lifestyle” scores very low on the carbon ratings. Numerous rather creaky conversations between Ovid Byron, the entomologist, and his new assistant spell out the behaviour of this extraordinary butterfly and the ramifications of global warming. It’s a right-on subject and you cannot fault the author on facts, Yet this “left hemisphere” fixation on detail makes for a flat Puritanical prose-style, lacking lyricism or feeling. The beauty of the Appalachian mountains is absent, and even Dellarobia, cast as a red-headed Venus by the local TV company, does not come across as beautiful. 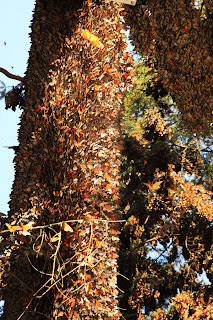 Story of our times

One reason we read, and need fiction is to understand how and why we are living now while imagining our way forward. (Adrian Ayres Fisher reviewing the post-apocalyptic novels, Arcadia and The Dog Stars)

So this is a personal story and a story about our times. When I left my old city life I stopped reading novels; by the time I returned to England ten years later and joined the Transition movement I had stopped reading books almost completely, unless they were related to work. I realised reading books had become an escape, something that afforded a comfort at the end of the day. Novels belonged to a book club, literary festival culture, the books you took to the beach. They belonged to old ladies at the libraries who checked out ten thrillers at a time to occupy their minds and fill their days. They were not the challenging and inventive works I once studied.

Like many of my contemporaries, when I returned to writing the form I chose was not fiction. We rediscovered the essay, the pamphlet (often in the forms of blogs), creative non-fiction and citizen journalism. In an era where becoming rooted in time and place has become an imperative, many of us sought out the older and vaster forms of myth and fairy tale, radical prose of the commons that challenged the history of the Empire. The impromptu speaker of words on the streets and at festivals took our attention, and fiction receded to a remote drawing room and Sunday newspaper world that seemed increasingly old-fashioned, conformist and slow. Used to squeezing plot into 140 characters or a pithy caption these 437 pages stuck in the Appalachian mud now seemed way too lengthy. Who had the time to read this stuff?

The pursuit of a narrative that can speak of our collapsing times is a mantra of the day, and perhaps it’s worth asking: does this narrative belong to the people who see the future coming, or do we include, as Kingsolver does here, the people who deny it is happening and are most likely to lose out when it does? Who will log their voices and their experience? Can we step in each other’s shoes and imagine what is it like, how it could be different, without the fictive form?

One of the major tensions in Flight Behaviour is the lack of awareness the outsiders (in their designer boots) have about the restrictive and humiliating nature of being dirt poor – of not having the right house, or education. Or indeed shoes. “Most of us have to walk around in our sleep, accepting our underprivileged position,” Dellarobbia tells Ovid:


I’d argue that the teams get picked and then the beliefs get handed-out. Team Camo get the right to bear arms, and John Deere and the canning jars and tough love and taking care of our own. The other side wears I don’t know what, something expensive. They understand recycling and population control and lattes and as many second changes as anybody wants.

I am not a climate denier and so cannot imagine what the doubters among Kingsolver’s readers might feel about Flight Behaviour. Looking out at equally waterlogged country (in East Anglia) I find myself thinking about that small imaginary house in Tennessee and realise that the book’s strength is linked to its ability to see what is, without any ought to be in the way. And that responding to nature in crisis might just bring things out of us we never thought were there.

When I opened the book I felt I would rather spend two hours watching Jennifer Lawrence in similar bleak conditions in Winter’s Bone. But in the end the novel had greater staying power. Roots, and not screen stars, are what we need right now, wherever we are, if we want to hold ourselves in place on the earth.

Images of monarch butterflies from 2012 documentary The Flight of the Butterflies; STIR is available at selected outlets and by subscription (see their website for details)
Posted by Charlotte Du Cann at 12:32