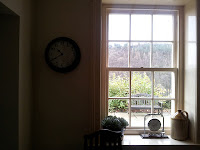 This month is all about time. I have been running up against a major deadline with the new edition of the Transition Free Press and haven't had a minute spare to write any posts. Ironic then that this week's report should be an introduction to Playing for Time - a collaborative handbook about Transition and the Arts, authored by Lucy Neal. Last year we set off to Hebden Bridge in Yorkshire to visit the house where the main part of the book will be created.

Heading North
The North is different my mother would say. People are more friendly and direct. She was from Yorkshire and would fiercely defend the wild moors and noble market towns of her youth. Heathen Southerners, as we were, we sided with our father (from the Sussex Downs), as they fought an ancient battle over the dinner table.  She was outnumbered. 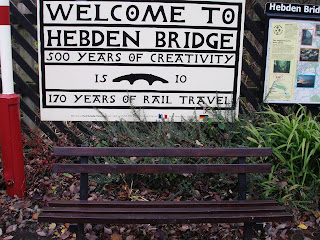 And the North is different. You feel it coming out of Peterborough. some kind of barrier slipping away between people, some rugged shift in the texture of place, stone and brick. The influence of an industrial past. We only went for a day, but it struck me each time I changed trains or breathed in the air. I hardly travel outside East Anglia, so perhaps I have become more finely-tuned to the shifts and changes in landscape and atmosphere. Paying attention and celebrating diversity of places and people lies at the heart of this new work we are embarking on in 2013. It has been a project that Lucy has been focusing on for many years, a culmination of a lifetime collaborating with artists and performers (running the theatre festival, LIFT) and her pioneer work with Transition Town Tooting.

The book will document the practices of creators and makers and directors, who are working with communities within the context of Transition. It encompasses many disciplines - from theatre to writing to crafts, and also those that may not traditionally be considered "art", such as community food-growing or street festivals and pop-up shops. In fact the book questions deeply what the use and function of art is in times of planetary shift and social change. Is creativity there to further entrench a hierarchical, business-as-usual culture, to uphold an Empire which sees Art in terms of commodity or entertainment? Or do artists serve a primary function, as agents of change and cohesion within the collective, moving us from one kind of world to the next? A reminder of all that is possible, and how we can activate the power of our imaginations and deep memory, not only to face the challenges ahead, but to create a future we actually want to live in? 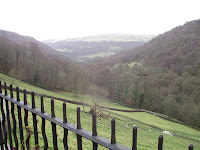 Co-operation
We met at Leeds and took a little train down the Calder Valley. I am exhilarated by the sight of hills with their moorland tops and the rushing rivers (O so flat and slow in Suffolk!) and we alight in Todmorden to meet Esther and Mary, two of the movers and shakers behind the Incredible Edible project. This growing began here in Todmorden in 2005 at the same time as Transition, and shares many of its principles. Like Transition it has spread to countries all over the world, and there are Incredible Edible towns from Lambeth to Brazil.

The project began by "propaganda" aka guerrilla gardening, where pieces of unloved land around the town were planted up with fruit and vegetables for everyone to pick for free. The project has expanded to include school gardens, local food markets, chicken clubs, bee parades, community orchards and growing spaces in public places throughout the town, and even along this railway line.

When Tim the ticket collector died we planted his favourite veg as a memorial, explained Esther (he didn't want flowers). "You've heard of the Bluebell Line, well we have the Broccoli Line." Would we still be here on Saturday when there was a Festival of Lights, they asked, where three towns have a great parade of lanterns and huge puppets, and there is a bike ride all along the valley at night?

We wished we were, but already we are back on the road to Heptonstall, above Hebden Bridge, to find our tiny stone cottage, and meet Mark Simmonds of Co-ops UK. Over a powerful pint of local cider, we discuss the extraordinary amount of community projects that are happening in the area, from workshops in Sheffield to the renovation of some of the "Tops" above the village, to manage the land for wood fuel and berry picking. 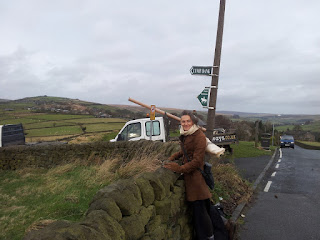 Co-operative societies have always flourished in the North, and so it feels right that we begin this co-operative project here among these wild hills and close valley communities. And right too, for writing, for this is the place where the poets Ted Hughes and Sylvia Plath once lived and, beyond the ridge, where the Brontes wrote their novels. If set and setting are the prerequisites for all good creative ventures, we are in the perfect place. The next morning we set off on the windiest day of the year to walk to the poets former home. As we head up the road I anticipate a coach and four coming round the brow of the hill, to leave a young women in bonnet and cloak to face her emergent destiny. But she does not come.

We are living in a different time. To discover the enduring images of our time is the task ahead. 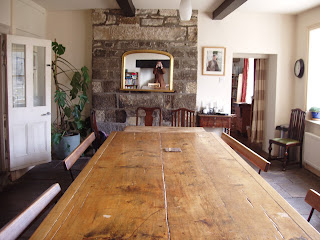 This is the table where the main material will be forged. It's the dining room of Lumb Bank, home to a former mill owner, and briefly to Ted Hughes (who was from Heptonstall) and Sylvia Plath (now buried in the churchyard). The house belongs to the Arvon Foundation, who run writing courses throughout the year. The foundation is an integral part of this project and something of a new venture for them as well, as most of their courses focus on individual creative writing of plays, poetry and prose. In early March 12 of us will sit around this table and, guided by two tutors, start exploring and putting together a collective vision for the future of the arts. For the past two months Lucy and I have been holding conversations with many of the people on the project (mostly via Skype). Some will come up here and we'll pull together ways of presenting their work. 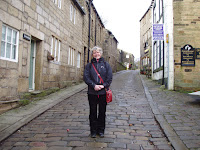 The book is in three parts. The first part frames the book and will include essential "big picture" introductions, from Paul Allen of CAT on the history of energy, to Rob Hopkins on Transition. The second main section is a showcase of the different arts practices and people involved, and the third a methodology or roadmap of their practices, so that people in initiatives and communities everywhere can be inspired to do similar work. In the way for example that Anne-Marie Culhane of Grow Sheffield, inspired many of us to run Abundance projects, sharing unwanted fruit from our neighbourhood trees and gardens. Everyone taking part in Playing for Time is a story in their own right and it is my intention this year to write these stories, and give my own take of the process it will take to create a work-in-community, that is the traditional preserve of individuals. 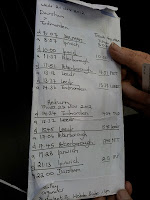 Return
Meanwhile after discussion with the Foundation organisers and an exploration of the house with its barn and gardens and wonderful airy rooms overlooking the valley, we headed back to our separate destinations: Lucy travelling to meet one of her daughters in Sheffield, my four-train journey south and east of the country, with the timetable Mark made for all the arrivals and departures in my hand.

Right now  at 10am I am about to talk with Lucy and our next practitioner and producer, Ruth Nutter, and then it's back to the paper. "I think twenty to eleven is a good time," said Lucy, as she sent me the top picture of the clock. As long as it's not High Noon," I said. "Or as my friend and fierce doorkeeper, Karen Binns used to say, "Two minutes to 12 people - time to wake up."
Posted by Charlotte Du Cann at 09:49