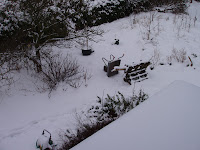 Suffolk, Reydon. It came like a fox at night, stealthily, and left noisily in a rainstorm at full moon. Today I woke up and missed the soft quiet white blanket that has covered the land for the last two weeks. Life at sub-zero is a tough one in a low carbon household (5 degrees in our living room most days) and down a narrow ice-rink lane, especially when you have to travel all over the country for meetings and get a new newspaper out. But there is something very intense and creative about this weather that brings you closer to people and life. It's been full on during this time here at the depot, so there is just time for a few snapshots this week (normal service will be resumed shortly). 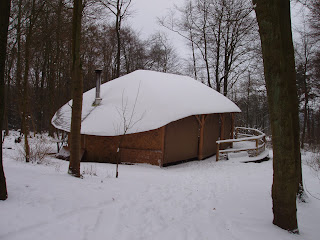 Hampshire, Petersfield Here I am sitting with the organising crew of this year's Dark Mountain festival, Uncivilisation 2013, We're huddled round a roaring wood fire in the Woodland Stage, which I am co-curating with the poet Susan Richardson in August. Fuelled by generous nips of island malt (Jura and Orkney) and travelling dishes (Galaway stew, Northern wild rabbit and East Anglia beans), we're cross referencing the speakers and writers, activists and workshop leaders, who will appear on the three stages amongst the beech woods. In spite of snow drifts and ice, we've converged from the four corners of Britain: from Wales, Scotland, Newcastle, Cumbria, Doncaster and London. It's seems crazy that we didn't stay home and talk on the internet. But you can't reccy a site, or work together virtually: it has to be real. Like the food and the fire.

Coming back to Suffolk, Mark picked me up at the station in a blizzard and we crawled home along the A12 in a white and whirling world. Scary, exciting, primal, unexpected . . . very uncivilised. Just how the stage should be, I thought.

Berkshire, Reading I'm travelling on the train with Lucy through the unknown birch woods and frozen ponds of Berkshire. We're on our way to Reading Museum, one of the Happy Museums you will be reading about in the upcoming Transition Free Press out this Friday. 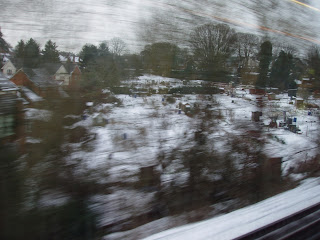 We're off to meet Gilly Woods, one of the tutors for our 'write in' at the Arvon Foundation's creative writing centre at Lumb Bank in March. Lucy has organised for the central contributors to her book, Playing for Time to meet here and we are deciding on the the convergence's key elements. It's an adventurous task for all of us (I'm helping edit the book) as twelve artists will be sharing their community practices from all fields in the arts - from crafts to festivals to food growing projects. We're aiming to share our voices, stories and our methods and capture them on the page by the end of week. 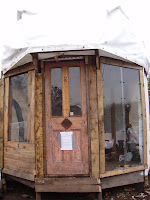 Middlesex, Grow Heathrow Later that day in the kitchen at Grow Heathrow I'm drinking one of the best cups of tea I have had in a long time. It's a wild midsummer yarrow tea, collected by their foraging Fridays group. Rose (who also helped found Transition Tufnell Park) is showing us around the main buildings and workshops, gardens and individual houses. I visited the co-op before on a balmy September afternoon, and it's even more striking in winter how many ingenious ways the collective have found to build all the conveniences you need and power them entirely off-grid: a wood-fired shower, a straw bale, a hot tub, a kiln, compost toilets. 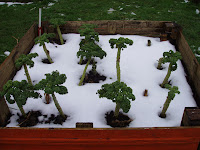 This is my favourite house with its geodesic dome built around a spinney of elder trees. Grow Heathrow are at present waiting for the verdict on their recent court case in London and we're all keeping our fingers crossed this extraordinary work of restoration and urban living won't end in their eviction.

Suffolk, East Bergholt Back in Suffolk we're off to Bungay to edit this quarter's Sustainable Bungay newsletter ready to be distributed alongside the national paper with its suitable icy front cover. The roads are clear but it's still well below freezing and all the apple orchards and hedgerows in the Waveney Valley are covered in sparkling hoar frost. Very happy that Josiah is serving up some of his famous British bean and parsnip soup before we get down to the design board in his equally unheated house. 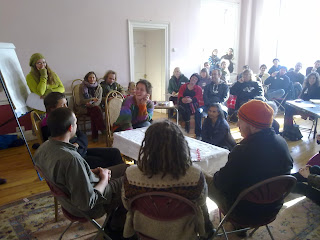 The next day, in spite of the threat of more snow, it's suddenly a beautiful morning and we are headed back down the A12 to meet up with 40 plus Transitioners and co-operative house dwellers from Cambridge, London and Ipswich. It's the Living Together gathering organised by the wonderful Gemma Sayers (Random Camel co-op) and Jon Halls (Lodge Farm). I'm giving a workshop on how to run new groups along creative lines called the Ideal Home Exhbition. I've never lived in a housing co-op, but I have worked cooperatively on many projects and have learned things the hard way. One of these is that selecting roles that you love and stick to are key: somehow that enables everyone else to share the best of themselves - their gifts. When we held a plenary and our four "editors" (Well-being, Practical Skills. Stuff and Resources, Social Pressure) fed back everything 25 of us had written on large sheets of paper, we found we had over 30 practical skills amongst us. That's how you know that when push comes to shove, we'll be just fine, even when it snows for days on end.

Just so long as We (and the enterprise) doesn't get stuck in Me. 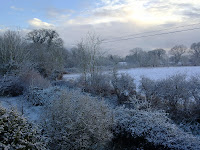 View outside my window, Suffolk; woodland stage, Sustainability Centre: allotments outside Reading; Oscar's house and kale, Grow Heathrow; workshop on consensus-decision making (or how not to get stuck in Me) at Old Hall, East Bergholt; our lane.
Posted by Charlotte Du Cann at 08:40