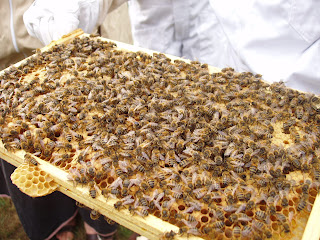 “The problem is The Media,” said the man in the audience.
“But there are the articles if you look for them,” another responded. “You just have to search on the web.”

“The problem is not so much the media”, I added, “But the fact we give it attention and therefore power. You’re waiting for Them to change and notice you, instead of concentrating on the fact we are communicating right now.”

We were in the Chaucer Club in Bungay after Nick’s economics lecture, and in the Transition way were holding a free-form discussion between thirty people. It’s not the ordinary kind of thing that happens in the Chaucer Club on a Wednesday. And yet it felt like the most ordinary thing in the world.

For years, like a thousand other writers, I struggled to get published by The Media. We love how you write but we don’t love what you write about, was the general consensus. The market didn’t want to know about dreams or plants or neighbourhood food exchange, or East Anglia, or the fact that life is not quite how it is officially described. A stack of manuscripts grew under my bed. Still I kept writing. Because, well, when you’re a writer that’s what you do. And meanwhile wherever I found myself I helped out with communications: drafting letters, press releases, events programmes, website copy, posters, flyers, leaflets.

And then last year I discovered blogging. Suddenly I didn’t have to wait for publishers to read the synopsis, for editors to reply to my emails, for my agent to make that call. I could just type words into a box, upload any number of lovely photographs and press a button. Whoosh! There it was. For the whole world to see if it chose. And I wasn’t alone: I was in a community of communicators who wanted to express what they were experiencing, part of a crew on a joint creative project.

Transition is about showing other ways of doing things in a world that is seemingly controlled by marketing and a highly manipulative press. This world is undergoing a radical process of change, however it’s officially “run” by a status quo determined to keep everything fixed (i.e. in its favour). Transition creates its own independent media because the conventional media that shapes our general perception of How Things Are is deliberately selective. It focuses on highly negative events that drain our emotions and induce powerlessness, whilst distracting us from reality with the comings and goings of “stars” and an illusory and oil-dependant life-style. 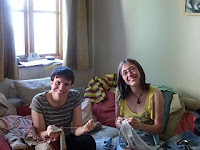 What you focus on expands, as the old adage goes.

So it’s important we make our own media because no one else is covering what we do or see. There may be local reports about Transition events or projects (covered by a separate pattern) but rarely people from the inside writing about Transition itself. People talking about what it is to go through this shift, people giving value to small ordinary things, sharing their storehouses of knowledge and experience, putting their attention, not on the rich or famous, or the disasters and dramas of history but the things that hold people together, the things that matter: like plants and dreams and neighbourhood food exchange and East Anglia. 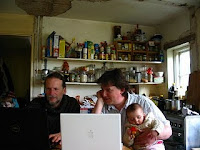 Most of all when you make your own media you find all about you people with great gifts and talents, with vision and intelligence, who would never be noticed or published by The Media. These blogs give us our voices, and in turn we give those sounds and images back to the world. On This Low Carbon Life there are journalists, editors, designers, artists, scientists, people who are expert in computers, communication systems, sustainable food systems. That’s just one small community blog in Norwich. Imagine if you gave voice and value to the people in every community in the land what kind of world we would see . . .

Making our own media: bees busy at work last week in one of the Bungay Community Beehives; writing on the kitchen table, Arizona; Elena and John at the TN Seedling Swap, Andy's pots, Kerry's ragrug; Helen and Kerry reskilling; Mark and Josiah (and Iris) in the Transition kitchen.