We'll Be Coming Down the Mountain, Singing 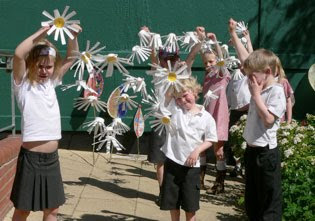 It’s the day when the year opens like a door. The first peep of sun, the moment you wake up and notice that the birds are singing and there are shoots in among the dead leaves. Any time now the crocuses will be appearing in the parks and the snowdrops in the woods. It’s still winter but spring is lightstepping her way in.

This week I’ll be looking at spring shoots and early moves, what it means to be downwardly mobile, about a project some of us are starting called the Low Carbon Roadshow, about a book I’m reading right now called The Gift – How the Creative Spirit Transforms the World.

Today's top picture is from a project in Suffolk called East Feast http://www.eastfeast.co.uk/ where artists work with children, growing food on school allotments during the growing cycle of the year and cooking up a celebratory feast for the community. Tomorrow Tom Harper and I are going into the woods. He’s been working with a group of children in Catton Grove school and we’re going storytelling among the trees with some of the creatures that live there. I’ll be introducing the Nightingale who builds her nest in the blackthorn bush.

What I love about these birds is that they are hardly ever seen; even if you do catch sight of one they are brown and small and undistinguished. But the sound that comes out! The singing in the dark just as spring comes! That’s the story. People in Transition are like that too. We’re not really seen, and when we do see each other, we’re not stylish or smart. But we’ve got a voice inside us that has been repressed for years, aeons it seems, and we’re starting to make that sound heard in a dark time. Ay Ay yippy.

This blog is about people getting in touch with that song inside. When we met up for our Blog-In recently there were ten of us at John Heaser’s, and what we liked was that reciprocity between us, the feeling that we were creating our own culture. You don’t need editors or photographers, or money. You can just pick up a camera and take a shot of what’s going down in your kitchen and post it that day. 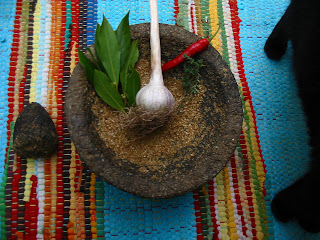 This pic is of a Mexican molcajete, a pestle and mortar made from volcanic rock. one of the oldest technologies in the world. I bought it one day when Mark and I drove to Nogales, through the grasslands of southern Arizona, where if you are lucky you can find grooves in the rock where the first people used to grind maize. I use mine to grind spices and a condiment called zatar that’s eaten in Palestine with bread dipped in olive oil, in Jordan, in North Africa, places where the wild thyme (or sometimes oregano or marjoram) is mixed with the sour sumac bush berries from the dry hill slopes, sesame seeds and salt. You taste this and you’re in those countries, without going anywhere near a plane.

That’s what I like about this low tech, high res culture: we’re using our modern intelligence, our love of beauty, our memory to connect with the archaic and redream the future. We’ve got a big task ahead to reconstruct ourselves from the inside, to reconfigure the world. But I guess it starts here in the kitchen with what you have at hand. With the people you’re working with, with the trees outside your door. The door of the year that is just now opening . . .

Molcajete from Mexico (with curious cat), garlic from Norwich allotment, Ring of Fire chillis from Darsham , bayleaves from my neighbour’s garden, thyme from outside my door.
Posted by Charlotte Du Cann at 16:39