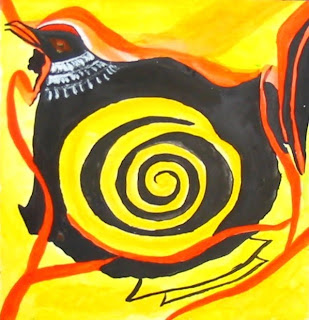 "It is best to think of this as a revolution, not of guns, but of consciousness, which will be won by seizing the key myths, archetypes, eschatologies and ecstasies so that life won't seem worth living unless one is on the transforming energy's side."
(Gary Snyder, quoted in the preface to the Heart section of The Transition Handbook p.79)

The condor will take its place alongside the eagle. Tom and I were sitting in the Workshop café waiting for Sorrel, jamming about storytelling, what we could do in the woods and in the Low Carbon Roadshow, the Transition project we’re starting this month.

Tom was telling me about the initiative, Be the Change (http://www.bethechange.org.uk/) that was inspired by an exchange with tribal elders in the Ecuadorian rainforest. The elders told the two originators a story about two birds. When the world is in balance the eagle and the condor fly together. In the modern age the eagle had taken supremacy in the skies, but now the condor was returning. You need to go back to America and change the Dream of the North, they said.

This condor was painted by Mark in a valley in Ecuador when we were both travelling through South America. The place is famous because its inhabitants live to an immense age. Like the eagle, the condor is a bird of the sun and a high-flyer; what distinguishes it is its ability to transform energy. It’s the king of the vultures, a scavenger who eats the dead.

By “dream of the North” the elders were referring to the North American consumer dream, the illusion that you can be who you want to be and throw away everything you don’t like and never have to deal with the dead. You can choose to live within the ideal life of the mind, to eat cakes and cows everyday, live in houses that are always as warm as summertime and never suffer the consequences. But, as permaculture states, there is no away within the earth’s eco systems: our away is someone else’s here. We’re trapped in an illusion that is poisoning the whole world.

It’s something you wake up to when you travel to these high, pure places. When Rob Hopkins travelled to the Hunza valley, the place of apricot trees and equally long-lived people, Transition was seeded. The Handbook opens with his drawing of the Himalayan village he considers to be the blueprint for sustainable community.

When you return from these valleys of immortality you bring a dream back with you, a dream of how to live in harmony with the earth. That’s your gift. Part of that dream is that the earth can restore itself and the people can restore themselves. One thing I learned from the Andes is that to align with the condor, we need to become transformers of what is dead and gone within ourselves and our culture - to liberate energy in ourselves the way mature forests liberate energy from the recycling of dead matter by the transformative actions of fungi and insects. 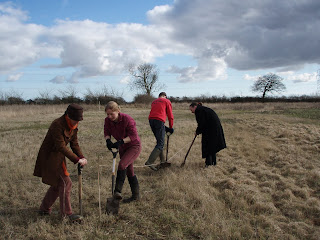 To free energy from what is dead and give energy to the living is the act that allows human beings to become symbionts rather than parasites on the earth. It’s the work that archaic and indigenous peoples recognise and accept, a responsibility for life itself. To see and feel your place within the web of life like this requires an act of imagination, which is why earth-respecting cultures value their acts of storytelling, singing and dancing so highly. Scientific facts and modern psychology can point the way forward, but only our creative imaginations can initiate what Gary Snyder calls the Real Work, hard yoga for planet earth.

We’ll be able to start our tasks of restoration once we remember that the dream of our own islands, once called Avalon, the place of apple trees, is linked in with the apples that Erik stored from his tree this year. Linked with the apple trees the children in Catton Grove are replanting in their estate that was once an orchard, with the Egmont russet cuttings we took from Malcolm’s smallholding to Becky’s co-operative outside Beccles. With the small projects that are happening all over England right now as Transition grafts its ideas for the future onto the rootstock of the wild ancestral dream. As I pass this week’s “speaking stick” over to Andy and wish him the best.

Because we do have a dream in the North. It’s a real one we’re creating right now.
Solar-powered, high-flying, liberating the world from old forms.

It takes a Billion, Billion Years to Burn Out the Energy I Have in Me by Mark Watson.