Ten years ago I gave up eating meat and nine years ago milk and cheese. Originally I gave them up because I no longer wanted blood on my hands every time I went shopping. Now I don’t eat these things for different reasons, planetary reasons, climate change and peak oil reasons, because of the funeral pyres of mad cows that burned as the millenium turned, because the effluence of factory farms seeps into the rivers and causes acid rain, because the livestock industry is responsible for more greenhouse gases than the whole world’s transport, because the 55 billion farmed animals that were killed last year do not include all the wild creatures killed in the razed forests of the earth, in our own land so people can shoot and dine grandly on game. Because the cows whom we once considered holy, who succoured us with their galactic connection, whose noble forms adorn the caves of our archaic memory, are being used as milk machines and thrown to the dogs without a second throught. And something of ourselves, of our true humanity, goes with them as they stumble to the slaughterhouse door each year.

Last year I stood beside a cow on a small family organic farm. She was about to give birth to her 18th calf. Some conventional dairy cows don’t last more than three lactations. They are so exhausted, so depleted providing the nation with its tea and cornflake milk, with its multi-flavoured yoghurts and pizza cheese that they collapse. Their bodies like those of their just-born male calves are turned into pet food. Scientists are working on “designing” a cow that can provide so much milk it will need constant milking. There are plans, Jane tells me, for a superdairy in Linconshire where 8000 cows will be incarcerated for their short lives and never see a meadow.

Here are some stats: a piece of land that can feed 2 people on meat can feed 10 on maize, 24 on grains and 61 on soya. 70% of the grain grown in East Anglia is for animal feed. While the EU is considering putting genetically-engineered seed into the agricultural fields of Europe because of an imagined future food shortage we need to take stock of exactly what we eat and make some clear decisions. We need to watch documentaries like Food, Inc., read any number of good books that put the industrial food machine into perspective: Felicity Lawrence’s Not On The Label and Eat Your Heart Out, Colin Tudge’s Feeding People Is Easy, Eric Schlosser’s Fast Food Nation, Carlo Petrini’s Slow Food Nation.

And then we need to engage with life in a way that demands full consciousness, with the kind of attention and perseverance that Jon and Chris have already documented this week. We have to radically change what we eat.

Like millions of people in Britain I was brought up eating sliced white loaves and all the horrors of convenience food – fishfingers, baked beans, packeted puddings, sweets, heavily pesticided vegetables and fruit. My mother was a good cook but she was a 50’s housewife and bought the whole Kenwood mixer dream. Like thousands of others I rebelled against my upbringing and went my own way in the kitchen. I spent my early working life in markets in my own city and abroad, collecting recipes, talking to fishermen and cooks and threw a lot of parties, each with a theme. One was featured on a television documentary programme called The Good Life. In between the interviews with me in an apron cutting up pigeons and trailing great swatches of ivy down a white-tableclothed table, full of silver candlesticks, are excerpts of Fellini’s film about decadent modern Rome, La Dolce Vita.

When I gave up meat a whole world dropped away. My obsession with food stopped. The parties stopped. I switched my attention. Standing in a borrowed kitchen at the end of my travelling years, I read a book by Colin Spencer, the vegetarian food writer and I “woke up” to the horrors of the slaughterhouse. That day I went out into the English countryside and stood by a herd of dairy cows:

“Hello fellows,” I say softly as I approach them, and they gaze at me with their dark liquid eyes, with their implacable flanks, and then continue their business. They do not move away.

I lean on the gate and pause in the mysterious presence of the great beasts, in a moment of their endless time. The gentle afternoon extends itself through the rolling land. A red kite swings overhead. I breathe out with the soft breeze and feel myself take flight and soar over the hills and tumuli of southern Oxfordshire, over the Chiltern Hills, over Wittenham Clumps, the vale of the White Horse, passing by its rounded forms and curves, following the shining dark river Thames like a giant snake running through the land. I feel in this moment exultant. The land and sky shimmer together, gold and blue, and at once all the constraints upon the country, the neat and tidy gardens, mown lawns, cropped and bordered fields, roadsides, clipped hedges, burst out of their constriction, like so many snapping fasteners of a dress, revealing the real beauty of the place that lies beneath - a country full of light and blue air, like a young woman walking and singing, lightness in her step, intense, intelligent, her dancing dress the colour of the glowing sun. In that moment of liberation, some forgotten part remembered itself in me; I was incarnating, taking form, as my feet found their place on the soft green turf, as I stood beside the cows, as we stood together in our mysterious creaturehoods, present on this island.*

It was the moment I landed on my own native turf. 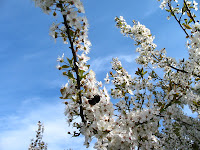 Sometimes you give up something without expectation of return, and then life gives you something you never imagined. When I gave up eating cows I stopped writing about stuff and started to write about my encounters with the earth (The Earth Dreaming Bank, 52 Flowers That Shook My World). But no matter how well a book is written, it’s not experience. No-one can tell you what it feels like to be kin with the animals, to be light enough inside to feel the presence and vibration of plants and trees, how it is when the creatures of the ocean come to you in your dreams, to know, even when the world is crashing about your ears, that the earth holds you beloved. As you walk across the hills, down the lane, now covered in wild plum blossom.

But I can tell you it was worth giving up shopping for, all that fancy cooking and party-throwing, those fleeting pleasures of a world that when you place your attention on it is neither dolce nor vita.