In Praise of the Great Tomato 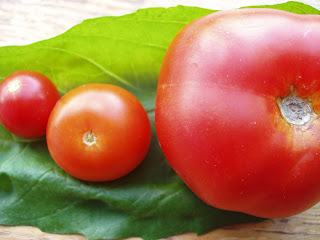 In the Low Carbon Cookbook we'll also be looking in depth at ingredients. Taking certain key plants and following their tracks across the world and in our imaginations. Today I'm highlighting the Tomato because this new world fruit has made its way into practically every kitchen in the world since it's "discovery" (by Cortez in Mexico in 1519). The tomato is often the first plant people grow on their own and was the most talked about plant in the TN Seedling Swap in May. It's easy to manage, fitting happily into pots and town gardens, inside or outside. Brushing past the scent of its leaves brings the memory of greenhouses, childhood, summer, Italy. . .

It has an allure like all members of its family, the Solanaceae which include the edible (potato, aubergine, chili) to the mind-altering (datura, belladonna, henbane). Pretty, often deeply scented flowers, exciting dark foliage, mysterious fast-growing fruit and tubers. Today it is a mainstay of the global fast food system (think ketchup and pizza) as well as modern classic cuisines (think pasta and salsa). It is highly flexible, good hot or cold, and of course, delicious.

Like its poisonous plant relatives, containing tropanes and other hallucinogenic compounds, however the adored and fiery-coloured Tomato has a dark side.

Elena wrote about a tomato rethink in her post on Wholefood Coops last month. Tins of Italian tomatoes are a storeroom staple, especially in the winter. Like me, she had read Felicity Lawrence's Eat Your Heart Out. One chapter of this shocking book about the corporate food monopoly is devoted to fish and tomatoes and follows the trails of the African migrants, hounded out of their traditional fishing grounds by European trawlers (mostly for prawns) and landing in Southern Spain to work in the supermarket salad greenhouses.These men live in squalor in makeshift shacks on some of the most polluted land in Europe (tomatoes, like all glasshouse inhabitants, suffer from infestations, so are doused with huge quantities of toxic chemicals).

So last winter after engaging in Carbon Conversations and calculating the fossil fuel use and carbon footprint of unseasonal hothouse vegetables, I tried to kick my tomato habit. I decided to buy local tomatoes from roadside stalls, from my veg box and grow my own in the summer. I weaned myself off indoor tomatoes and just used dried tomatoes or an occasional tin for cooking curries etc. I thought I'd be desperate for the fresh ones by the time June came. But I wasn't.

Instead I began to wonder . . . How many of our foods are we addicted to, or eat by habit, or convenience, without considering our bodies or our fellow human beings?