Outside there is the most extraordinary sunrise. The sky is crimson pink over the sea, full of long clouds like flames edged with violet. It’s completely still. I've stumbled out of the tent to come upstairs to write and have been mightily distracted from my task. It has been beautiful for the last two days, warm and misty and embracing. After a tough and grey August, September has arrived with all its bright fruit and luminous skies. You can uncurl yourself in such mellow weather and never want the day to end.

Two crucial lessons I’ve learned about English summers: 1) take advantage of the lovely moments and store them up for the long dark months ahead, and 2) don't do this with your mind, do it with your body. The body is intelligent in ways our heads are not. You can look out of the window and say to yourself hmm nice sunrise and go back to the computer two minutes later, but looking at views keeps nothing of value or well-being. You can store the thought of sunrise but not the experience. And when it comes to earth matters experience is what counts. To store up sunlight and warmth you have to go outside, swim, walk, sleep under stars and get in synch with the elements. Taste rain, feel bark, eat fruit. 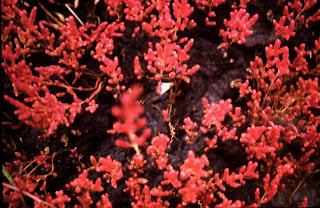 SAMPHIRE Reading Elena’s post last month about recognising the shift of season with the sound of jays I was shocked to realise that I had hardly been out in the wilds this summer. So I went down to the marsh and there the blue-eyed birds were, hollering in the oaks, the ground full of spilt acorns. The flowers were still there too - angelica and marsh thistle - honeybees gathering nectar and pollen from musk mallow, watermint and bird’s foot trefoil. Later, encouraged by listening to Fergus the Forager at Uncivilisation, I walked home from Southwold along the Blyth, snacking on sharp and salty sea beet leaves and reddening samphire, gathering blackberries, elderberries and damsons for that dark autumn porridge experience at breakfast. The tracks were full of scented sea asters and wormwood and the air with sounds of migration: holidaymakers flocking back to the city, barnacle geese arriving from Siberia. BLACKBERRY What was striking about Fergus was the way he imparted plant knowledge. He was speaking in words, but most of what he was saying came from his direct physical relationship with the natural world. You could tell by the way he stood alongside the three humble and vigorous plants he chose to talk about – hogweed, nettle, bramble – that he spent his life searching the undergrowth in the wind and the rain, chopping and tasting and experimenting in a field kitchen. He loved the plants for their usefulness, for the way they were constructed, but also for their beauty. "It’s about being creative," he said and handed round a little jar of blackberry stem stars, which he had made from cutting bramble shoots crossways in April when they were still bendy.

HAZEL In between the intellectual debates and discussions at the festival I found a physical workshop outside the Doing Space Yurt called Embodying Uncivilisation, which (as far as I could tell) was all about getting out of your mind and instead walking and talking with your whole body. As soon as you allow your rigid body to become bendy and free, let your eyes take in everything around you, your feet feel the ground beneath you, that introspective unkind thought-realm we spend most of our time in ceases to engage your full attention. Instead you turn your consciousness inside out and start to absorb your natural environment, aware of light, sound, atmosphere, scent . . . those are the things you remember.

Uncivilisation was about sitting by fires, walking through the dark woods, sleeping in the open as much as it was about intellectual exchange. My first conversation was with Martin and Mary Kibble-White about their improvised rocket stove (made from a coffee tin and an heirloom kettle) and the supple hazel branches Martin was collecting for his workshops on hurdle making. 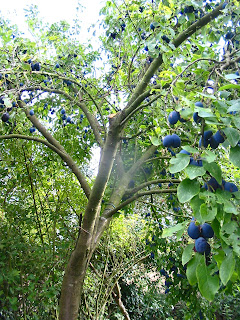 DAMSON Downstairs the kitchen table is full of fruit and the chest of drawers covered in stalks and small brown envelopes full of seeds - dill, parsley, fennel, sunflower. This week we went to Cathy’s to pick apples for the Waveney Greenpeace Fair tomorrow (we’re running the Transition Tea Tent with Nick) and damsons for jam. Cathy runs the Abundance project for Sustainable Bungay, which gathers fruit that people don't want from neighbourhood or garden trees and redsitributes it to those who do. In our neighbouring initiative in Beccles this has become a full-on community project. With us it’s a smaller venture. We have Abundance tables at all our events, giving fruit away at our Happy Mondays and Bungay Bees events, exchanging at our Give and Take Days and Garden Produce Swaps in the Library community garden. All part of the gift culture intrinsic to Transition. In Cathy's small orchard the plum and gage trees were bowed down with fruit. How come, I wondered as I picked the local giants, Norfolk Beefings, our minds are so full of lack and loss and our trees are so full of abundance? 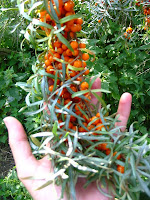 SEA BUCKTHORN Now I’m going down to the sea to have breakfast in the dunes with Mark. The sun is up. Afterwards I’m going to make a tincture from those sea buckthorn berries we gathered yesterday (a very sticky and spiny experience!) for a winter tonic. The handsome wavy-leaved sea buckthorn grows all along this coast, sometimes as a windbreak in coastal gardens, and its orange fruit is sharp and tangy and has a distinctive scent almost like passion fruit. They are a kind of Transition "superfood", packed with minerals and vitamins (15 times the amount of vitamin C in oranges). I say Transition because most of these powerful anti-oxidant berries, like goji from China or blueberries from the States, are high-carbon and expensive to buy. Sea buckthorn has been used for centuries in the East and in Siberia as a medicine (mostly as seed oil for the skin) and it grows here well and, like those other great tonics, beetroot and elderberry, is incredibly cheap. Free in fact. The tea from the leaves and berries is delicious too and they are great sprinkled in a slaw. Check them out!