Last month I went to Uncivilisation, a festival organised by the Dark Mountain project. Below is a report I wrote for The Independent newspaper (writer’s cut). Tomorrow I'll publish Part 2, a personal reflection on the relationship between the Transition and Dark Mountain movements.

“My name is Arthur Doohan and I’m a recovering banker”. We’re at the beginning of the Uncivilisation festival on the leafy South Downs on a sunny August weekend. 300 of us are gathered in a marquee to listen to the Collapsanomics Panel that includes an ex-Wiki Leaks worker from Iceland, a writer and hacker from the United States and a criminal justice specialist, originally from the former USSR. 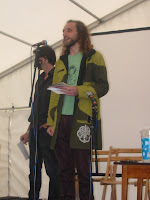 Uncivilisation is no ordinary summer festival. You can find tents and music and people in sturdy footwear queuing for coffee, but there the similarity stops. People have gathered here not to escape from reality but face it and the Irish banker is opening this session on Living Through the Unfolding Breakdown with an unswerving set and setting.

It’s the second festival organised by the Dark Mountain Project, a literary movement that began two years ago with a manifesto published by two ex-journalists, Paul Kingsnorth and Dougald Hine. Its two main tenets are that we live in a time of systemic collapse and need to engage with this crisis through narrative and stories, and secondly that we need to look at humanity from a “deep ecological” standpoint, as one among many species on the planet. 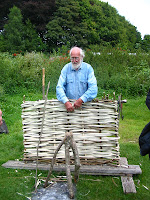 Originally the project was set up to create a writers’ journal (now in its second publication), but the manifesto has also inspired singers, craftsmen and artists and it is this mix of earth-based creativity and intellectual discussion that provides the groundbase for the festival. It’s a space that is hard to find in the everyday world. Here, Dougald Hine explains “there is room for reflection and no immediate rush for answers or actions.”

“Two years ago we were called crazy collapsatarians and now people are not saying these things any more. So much we have taken for granted is already breaking down around us. It’s clear we are going to have to get used to living in a different world than we were promised when we were growing up and that people have a deep capacity for adapting and making things work.”

Dark Mountain has been accused of being doomist, romantic and dangerous. But in spite of its talk of ancestral bones and sacred skulls and The End of the World As We Know It the mood of the weekend is ineffably cheery. There’s the kind of goodwill and openness you find when people don’t have to keep up pretences anymore and start to get engaged with Things That Matter. Where death and failure are allowed into the conversation rather than kept at bay, or turned into a therapy session. One thing is clear from the start: we are not here to be entertained or feel good. We are here to talk. 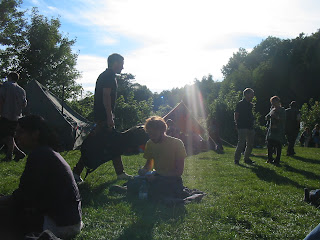 And there is a lot of talking. Intense conversations between geographically-dispersed people, swapping emails and instructions for making nettle curd and hazel hurdles. Dark Mountain is not a campaigning movement, it’s more interested in wielding a scythe than grinding an axe, and though most people here are highly politicised, the discussions round the fire and over the café tables are an exchange of experiences, rather than arguments or power struggles.

You could expect elitism and attitude, but there is none. Since no-one knows what the future holds there are no experts. There are no commercial stalls, no celebrity line up, no expensive technology. The emphasis is on imagination and craft and what we can do with what is at hand. Uncivilisation is primarily a meeting space to share knowledge and spark connections. There are workshops on low-tech skills like foraging and scything, talks about General Ludd, permaculture and mythology, readings of “wild writing”, meetings about off-grid publishing, off-curriculum teaching. People don’t just sit on the grass and watch performers, but are invited to ask questions, feed back ideas - more participants than audience. 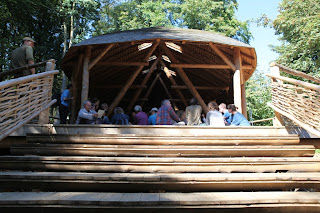 “We’re writers with dirt under our fingernails” states the manifesto, and what strikes you is that the new narrative is not some urban dystopia, a tale told by cynical city novelists, it’s directly rooted in the materials of nature. It shares a lineage with English visionaries, dissenters and poets, and yet feels new and modern, planetary, something we are all inventing together.

The festival itself is simply designed: a marquee and woodland space for talks and music, one Doing Space in a yurt, one Free Space for self-organised sessions in a tipi. One bar, two communal fires, three (solar heated) showers. The Sustainability Centre is a suitably poetic venue, an ex-military base, now meadows surrounded by beech trees. It’s small too which gives the maximum opportunity for those key encounters and crucial conversations. 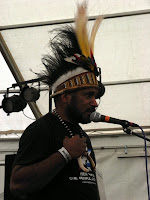 The awareness of being at a historical tipping point is what brings everyone here: writers, activists, philosophers, NGO workers, Transitioners. The faux-hippy chill-out scene you find at most festivals is notably absent. Uncivilisation bears the urgency of the times. No one is wearing fairy wings. Anton Shelapanov, brought up in the shadow of a Siberian gaol and now a resident in Tottenham, gets 15 of us to stand within a roped circle. And then 45 of us. That is what the cells were like in Russia in 1995, he tell us, and talks about the tinderbox conditions in British prisons after the riots. A young writer from South Yorkshire shakes as she tells the story about finding meaning in her community’s experiences after the Miner’s Strike. An independence leader from West Papua sings a song for the 250 tribes now being exterminated by the Indonesian armed forces, as Rio Tinto and BP ravage his ancestral mountain. He sings for the earth, for the soil, for the birds of paradise we are all losing.

“I lead my people with a tear,” he says.

Dark Mountain is about finding the light in the darkness, a new way of proceeding. It seemed the high moments all took place at night: sitting round a fire under the stars as the Russian storyteller emerged from the shadows in a bear mask ringing a bell. Hearing the feral choir laughing and howling in the woods, following a trail of lights through the trees and finding a naked man curled up round a skeleton of a small deer in a performance called Liminal. How shocking these things were and yet so familiar. 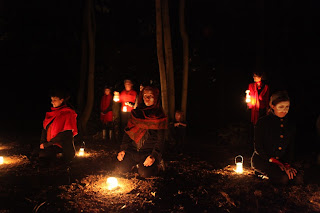 The ancestors sing life back into the bones, Sharon Blackie tell us, crofter and publisher of Two Ravens Press in the Outer Hebrides. It’s the beginning of the story of the world. Not a world shaped by politicians or by global corporations, but by storytellers and singers who make us feel at home on the earth.

If Uncivilisation was giving us a glimpse of the future we have everything to meet up for.

Uncivilisation took place at the Sustainability Centre, Hampshire www.sustainability-centre.org. Dark Mountain Journals 1 and 2 can be ordered from www.darkmountain.net.

Suitcase with programme and Wild by Jay Griffiths and woodworking tools; Dougald Hine introducing the weekend; Martin Kibble-White teaching hurdle making from hazel; writing and meeting outside the marquee; Woodland Space; Benny Wenda speaking about West Papua; Liminal in the woods. Photos by CDC and from the Dark Mountain blog.
Posted by Charlotte Du Cann at 12:44