the spark that lights the stove 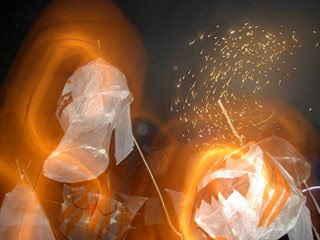 i
"People don't want to be told about those things anymore," said Diana. We're at a Dark Mountain meeting on a dark December night in a small house in Pottergate. Nine of us, arts and science PhD students mostly, are sitting in a circle. We're working out a way we can create an event, based on Iain McGilchrist's work on the left and right hemispheres of the brain.

One of the characteristics of the left hemisphere is that it gets overloaded with too much information. It can only cope with one problem at a time, segregated into boxes with right and wrong, yes and no solutions. Phil, a marine biologist, who also helps run Norwich's weekly FoodCycle Cafe, has suggested we show what lies behind the industrialised food machine.

To face that kind of reality and make complect, consensus decisions you need to enter the right hemisphere and see everything it takes - plants, animals, people, land, systems, water - to bring our daily bread on to the table. You need imagination, feeling, connection and right relation. To understand all-things-at-once and undergo a complete change of heart is what sages once called illumination - the light bulb moment when everything becomes clear. It's the fire-brand that all creators steal to bring warmth and nourishment to the people. 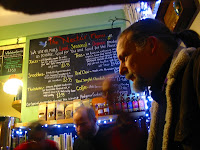 At The Nectar Cafe off the Unthank Road a small circle of people, Transitioners mostly, are sitting before a midwinter meal of spicy dahl, chickpea stew, millet, buckwheat, pumpkins, sprouts, parsnips, almond cheese, wild mushrooms and red bean hummus. We're closing up the year and discussing how to proceed with our Low Carbon Cookbook. I'm eating something I have never tasted in my life. It's dried curly kale that tastes of cheddar. Chewy, strange and very very more-ish*.

Jo's shelves are stacked with local herb teas and hedgerow cordials and jars and jars of lacto-fermented vegetables, chutney and salsas. A tall jar of sliced preserved carrots stands on the side, next to our brewing chai from redbush and home-made almond milk. Jo has been preparing all autumn for next year's hungry gap. Her cafe, like our Low Carbon Cookbook, is seasonal to the max. To live within these kind of constraints happily, as we have discovered, requires a whole different approach to cooking and living life. It's something that all cooks and creators find as they bridge the gap between the left and the right ways of seeing the world - the spark that lights the stove.

The spark is what you look for when you write a book, a creative way to mix that left-side heavy-duty information and the right-side possibilities of living lightly in synch with the planet. None of us wants to write an entertainment, or a text book. What makes you pick up a cookbook? we are asking each other around the table. To proceed towards a low-carbon future an imaginative relationship with the physical world is necessary, which certain key commitments have already been made. What wastes time is convincing people you think don't want to know. What we need is an encounter that illuminates the dilemma our industrialised culture is in. What we need is to be rekindled by something stronger, more alluring than any feel-bad information. Something you never thought of before, like curly kale tasting of cheese.

What you need is a practice. A spark that lights up your mind. 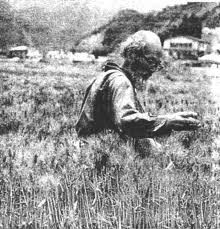 In Japan a sixty year old farmer decided to write a book about farming and food. It is called The One Straw Revolution. For forty years, contrary to all modern Japanese agricultural practices after the war, the ex-scientist Masanobu Fukuoka tended his small fields of rice and wheat and orchards of tangerines without any pesticides or technology. He did not till or weed the soil or use machines and his fields yielded as much grain as the monoculture that surrounded his traditional hillside farm. When pests swept through the land his crops survived. He called his way of interacting with the land natural farming and maintained (until his death in 2008 aged ninety five) that a healthy body came out of a healthy environment. To keep sane and sound you needed to eat according to nature and the territory in which you live. Food that needed to be struggled for to obtain was the least beneficial. Nature or the body itself was the guide you needed to follow,“but this subtle guidance goes unheard by most people because of the clamour caused by desire and the discriminating mind.”

To restore the body requires a readaption to nature. To renovate exhausted soil or soil rendered sterile with pesticides and herbicides and artificial fertilizer requires perseverance. It takes time for the body, revved up by an exotic, highly processed, high-fat Western diet, to reorganise and recover its natural appetite. It takes time to learn how to absorb the kind of food Fukuoka (and several contemporary Western writers on food) are talking about: plenty of plants, not much meat, not much. It takes time to break habits and to let go of the complexity of diets and science in one’s mind and the emotional reactions caused by an unnatural way of life. To engage in a way of being where food is naturally limited by place and time.

Once engaged in this process however your body self-organises in a revolutionary way: you don’t suffer from depression, anger or restlessness, you are not filled with the desires and cravings of the modern snack-and-go culture, the hostility that comes as a consequence of eating unnaturally formed plants and caged animals. However this transformative re-naturalisation process is rarely discussed. Our present Western diet, with its glamour, its comforts and its treats, fully backed by a corporate food industry, is the elephant in the room. And no one wants to go there. 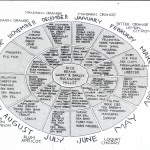 Except that we have to go there, because it’s killing us and everything else in the room. The industrial food machine has substituted lifestyle for life, a way of thinking that convinces us we have a choice and that the choices we take have no consequence. But this does not mean that consequences do not exist. To continue to uphold our lifestyle, to choose cheap and convenient food, means we choose to compromise not only the natural life of eco-systems and the livelihoods of farmers everywhere (including those in East Anglia) but also the very nature of our own bodies and minds. For the future to happen we don’t need choice in the kitchen, we need to make decisions.

This decision starts as we stand at the chopping board and by the stove. It doesn’t mean facing another direction so we don’t see the elephant, it means facing reality and undergoing a radical shift of values. Reality is what we are doing everyday with our hands, our ability to ask intelligent questions: What does it mean to eat and cook in connection with the living systems, ecologically, to take account of the consequences of our actions? What does it take to live and eat within our means?

Our book is about growing food and about eating food. As well as the bring-to-share recipes, resources and carbon calculations, we look at the decisions people are making not only to re-establish links with the living world but also with each other. The industrial food machine, powered by cheap fossil fuel, has enabled some of us to dine like Roman emperors. Eating for resilience means we will eat a lot more like peasants, more simply and more often together. 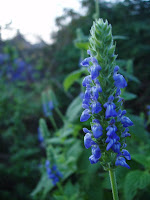 This book looks at what it takes to make these kinds of practical decisions, what happens in an energy descent kitchen, what kind of food you cook in downshift cuisine. How you go about putting life back into plants, into the pot, what Hopi farmers call navoti, the life in the seed, and Mexican cooks call chispa, the spark that fires up human beings.

The pilot light that fires us all from within.

*CRISPY CURLY KALE: Marinate small pieces of curly kale in olive oil, garlic, ginger and tamari overnight. Dry in dehydrator or low oven for a couple of hours. Store in an air tight container. The key with processing any raw food is not to cook it over 39 degrees, the point at which the enzymes are destroyed. The Nectar Cafe is at 16 Onley Street, Tue-Sat, 10am-5pm.

Photos: Gwyl y Golau or the Festival of Light in Machynlleth from Ann Owen's Social Reporting post on Arts and Creativity in Transition; Masanobu Fukuoka in the field; wheel of the local food year from One Straw Revolution; chia, food plant of the future by Mark Watson
Posted by Charlotte Du Cann at 09:49