A Time of Gifts

We are a market people. In a world where all things are a commodity - air, water, food, animals, the seeds we plant in the ground, the minerals under the ground, the genetic make up of our bodies - money is our god. Everything we do we do in the name of profit. We emulate the rich, we despise the poor. All things on earth are property. This bird, this child, this lake, this mountain has value only insofar it can bring us financial reward. Every day we bow down to Mammon.

We forget absolutely what all scriptures and native prophesies say about a people who are entranced and enslaved to a material world. I am not a bible person, or anyways spiritual, but I know when a house is built on sand and a storm is coming.

Some of us in 2012 are remembering and waking up to reality. The fact is since the banking crisis and the emergence of movements like UK Uncut, Occupy and Move Your Money, a lot of us are becoming atheist and getting much smarter about the spell-making behind money. How it is conjured out of thin air, how the financial high priests shape the physical world to their benefit, how mainstream media and governments serve their interests, and pillory anyone who dares challenge their absolute rule. 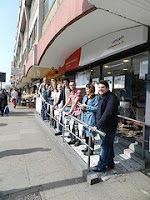 Engaging in alternative currencies is one of the ways to break up the global cult of money, as well as providing a transaction that brings benefit to businesses and communites on a local level. There are several organised by Transition initiatives: the Lewes Pound (as Chris has already mentioned), the Totnes, Stroud and Brixton - which pioneered the first e-currency - and most recently the Bristol Pound which will be launched in May (which Ciaran Mundy will be describing on Saturday). But there are other ways in which Transition assists in changing our dangerous allegiance to the money-making Machine and that is in bringing about a culture of free exchange.

Money enables you to control your world, and, as Charles Eisenstein says, in a hostile environment, where you are not connected to the planet or other people, money enables you to buy you some kind of protection. Money enables us to fly round the world and treat life as something we put in a shopping basket. But it doesn't bring companionship or connection. With the trees, with the people, with each other. For that you have to drop your belief in the power of money. And most of all you have to drop your fear.
Dropping belief

So this is a small personal story. In 2007 I went into a jewellery store in my local town with a necklace that once belonged to my mother. I was running out of money. That necklace, like other small gifts, was some kind of insurance against the bad times. It's African amber, my mother had announced when she bought it.

"I'm sorry to tell you this but this is plastic," said the girl in the Amber Shop in Southwold. "You could sell it as costume jewellery."

I laughed. Half in embarrassment and half in disbelief. Plastic! And then I asked myself, why did I go along with that African story, when I knew perfectly well that amber comes from Poland or Mexico, or is washed up on the East Anglian shore.

That's the day I felt hunger for the first time. I realised I would have to face the music and go on the dole. I was no better and no worse than anyone else. I would have to endure what millions of people without voices endure daily, in a process designed to humiliate and grind down those who are not slaves to the Money Machine. It will make me angry and make me fight for self-respect. It will show me a world I have never seen before and discover fellow-feeling in the strangest of places. Most of it will wake me up and realise I am not on my own. That standing up for myself is not just for myself. A year later I will join Transition.

Not having money breaks your isolation and opens you, and when you open up that's when the gifts come. It was shocking, I told the Norwich Heart and Soul group when I related this story, but it was also liberating. My mother spent her highly-bourgeois life saying she wanted to live in a community, that she wanted to be an artist and that things didn't mean anything. They weighed you down. She didn't make it. I was about to. 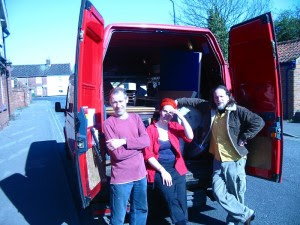 The gifts of Transition
So the first thing is not to be ashamed about not having money, or the wherewithal to make any. In Transition that's not hard as most of us are broke. We get by. Most of us are on low-incomes and tax benefits. We don't talk about it much, but we know it's there. I don't know whether it's because we have experienced what it is like to live on £50 a week with the world's hostility on our heads, but we do not look at each other in terms of property or income or status. We see the deeper values of people, the work we do for Transition, our skills and generosity and intelligence, we way we make each other laugh. the vibration we bring into a room. The fact is living a low carbon life is also living a low-income life and engaging in Transition culture makes having less easier, kinder, to bear, not just for ourselves, but for everyone on the planet. 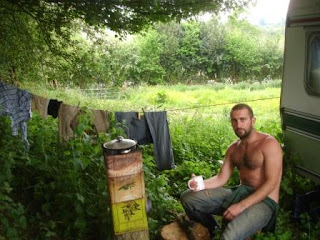 This is not just about using Freegle or volun-teering at FoodCycle. You can do those things and still worship Mammon - out of meanness or as "charity", a way to salve your conscience. It's about a whole shift in cultural values. In Transition you're not putting all your attention into living in an exclusive fossil-fuelled property with a swanky car and putting Them down, you are making connections with your neighbour and the neighbourhood. You love street trees and hedgerows that bear fruit and nuts for everyone to pick. You love allotments and community kitchens and swapping second hand clothes and admire one another for living without heating, or cycling long distances to work. Or in the case of Mark Boyle, living without any money at all. This is a culture about We, because it depends on Us to work, a sense of being in the world together. Not Me against you.

In Transition we share stuff as a way of life. We lend each other tools and pass on our skills. In the Low Carbon Cookbook we forage, glean, skip dive, and tell each other about our freegan adventures. In Sustainable Bungay we put on Give and Take Days twice a year for the community to exchange goods without any money. We run Give and Grow days where we exchange seeds and plants, flowers and bushes and knowledge. All our events have an Abundance table with produce freely given from our gardens. I have only just finished the apples I gathered and stored last autumn from the table at the Library Community Garden.

Thanks to Transition I am bold and truly thankful: I can go to my neighbours to borrow a stepladder, a mower, big things I can no longer afford. People give me furniture and clothes, compost from the horses down the lane. Our local grocer lets us have food he cannot sell. Sometimes a pheasant that has been run over finds it way into our pot. It's a different attitude to life, that brings everything you touch to life. It's not glamorous, it's not powerful, but it has heart. A heart that is not for sale. 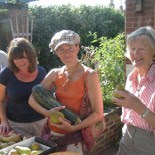 What do I give in return? When push comes to shove, everyone gives their gift. What they have in their hands at the end of the day. I write. I write in praise of everything I see. All the small and bold moves a people are making to downshift. All the beautiful and difficult things we experience. I write in praise of the people who are learning to love their neighbour and not worship Mammon. I write for the new paradigm. I am writing our story. I write for free.

Video for Sacred Economics; queue outside Brixton Credit Union on Move Your Money Day; Mark, Nick and Eloise on Give and Take Day; Mark Boyle, The Moneyless Man, outside his caravan; with Daphne and Lesley at the Produce Swap in the Library Community Garden