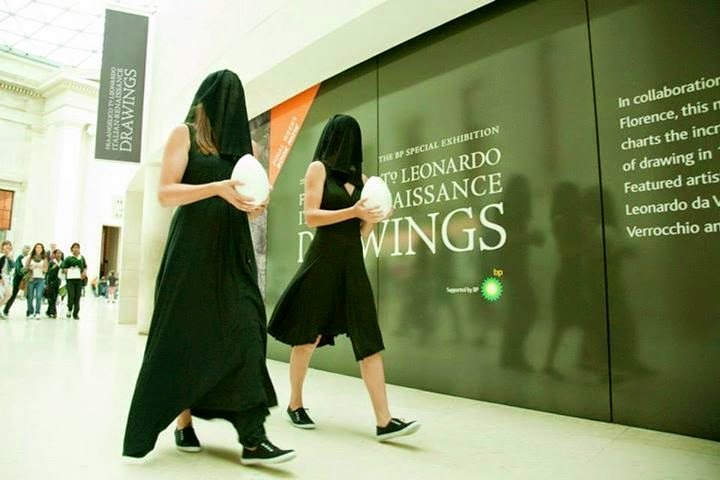 In a month of climate actions and demonstrations from the global People's Climate Marches to No to TTIP and Global Frackdown here is the autumn Transition Free Press profile of activist Danielle Paffard. Each issue I interview people who are key to an understanding of and manifesting 'Transition' culture. In past editions these have ranged from Mark Boyle on the philosophy behind gift economy to George Monbiot on rewilding our neighbourhoods and imaginations. The interviews are often long and intense, though the space in the paper only allows for core extracts from our conversations. I begin with a few key questions and let the story unfold...


What makes an activist? And what effect do actions take in shaping our cultural narrative? 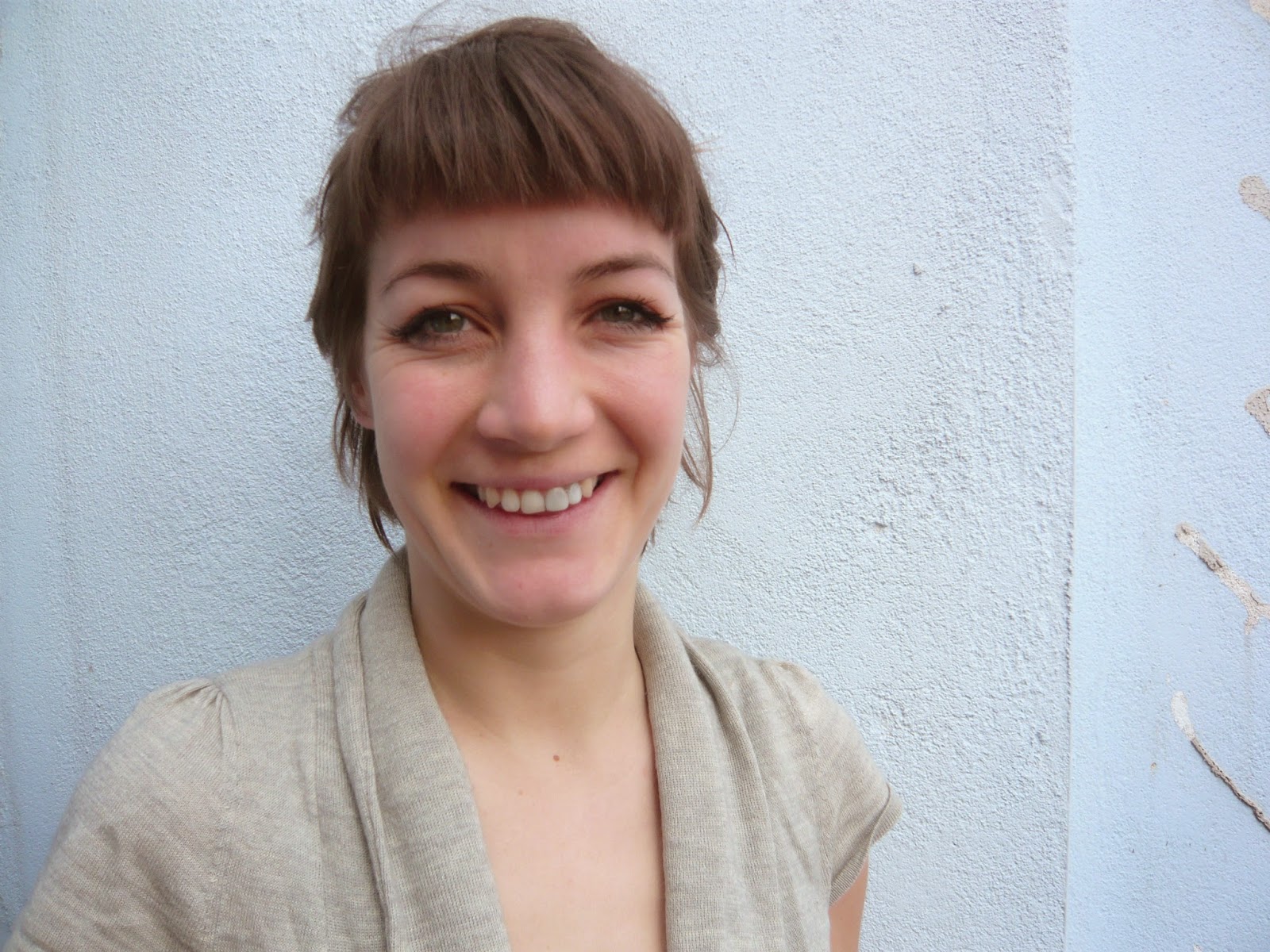 Danielle Paffard helped start up the highly influential campaigns UK Uncut, Move Your Money and No Dash for Gas. How did she get from being ‘relatively unpolitical’ to becoming the new UK divestment co-ordinator for 350.org?

“I studied the environment at university and came out feeling there was a huge problem, but also feeling totally useless and unable to contribute.

“I came across Climate Camp and went from being quite anti direct action to meeting these amazing activists. Two months later I was locked to a coal-fired power station, shutting it down from the inside. That was a really transformatory experience and formed the founding principle for most of the activism I’ve done since: you find a group of people you can work with and who inspire each other.

“Then in 2010 there was a change of government. When the Spending Review made it clear just exactly what this new government was about another radicalisation moment happened to me.

“One of my friends said: if we just keep on marching from A to B listening to Tony Benn speak, we’re going to lose. We need something that’s more feisty.

“The next day he found a small piece in Private Eye about how Vodafone had avoided £6 billion worth of tax and he made the link: ‘Look, if we’re losing £6 billion from one company that could cover almost the entire issue of the cuts, how are the government getting away with this austerity narrative?’

“UK Uncut started at Vodafone’s flagship store in Oxford Street, using the direct action skills we’d learnt through the climate movement to highlight the falsehoods behind austerity. 70 people shut down the shop. By that weekend there were 30 more actions around the country.

“This was when Occupy was starting up and there was a huge anger with the banks and the bailouts. But, though with UK Uncut we targeted high street banks with our actions, it was hard to break through into the more systemic problems around banking. 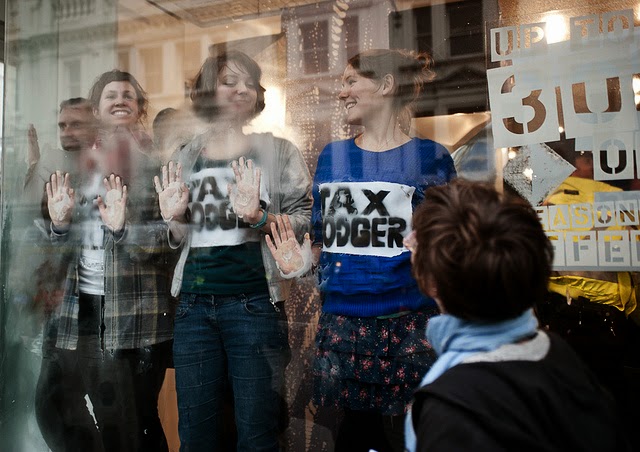 “It was unexpected and exciting and had a key role in changing the awareness of tax justice in the UK.

“At that point I banked with HSBC, who fund the world’s biggest coal mines. It had been on my to-do list to change, but it wasn’t in my diary. So we came up with actions to motivate people to close their accounts.”

“And so with another group of friends we set up the Move Your Money campaign, which was about very publicly moving your money away from the big four banks into more socially responsible alternatives.

Danielle’s next move however was far away from any high street: with 16 others she scaled a 300 foot chimney to protest about the building of new gas-fired power stations in the UK.

“The platforms at West Burton were about five metres from the top. Once we got on there we blockaded the access points and dropped a hanging tent down into the chimney. So they had to turn the power off. And people took it in turns to sit in that tent. It was November and really cold.

“We delayed work for a week and stopped 20,000 tonnes of C02 from being released. EDF tried to sue us for £5 million. The public reaction was extraordinary. 65,000 people emailed EDF to drop the charge.”


As a result many climate activists were reinvigorated and the Reclaim the Power event was launched at the Balcombe anti-fracking camp in 2013. Paffard is now to be found behind the scenes as divestment co-ordinator for the climate action organisation, 350.org:

“We’re working on ways to stigmatise the fossil fuel industry sufficiently to unblock the political process. It is so weighed down by the fossil fuel lobby we are struggling to get the meaningful decisions we need to do something right on climate. 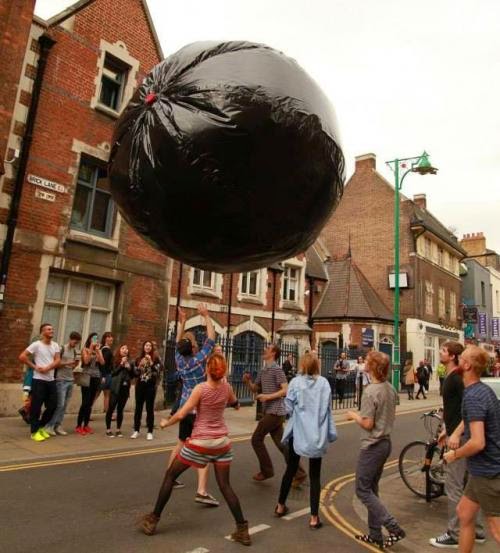 “My role is to work with the existing campaigns – the university campaigns organised by People & Planet, Operation Noah who work with faith groups and the fossil free health campaign, started by Medact, who have just got the BMA to divest. I am also helping to encourage small independent local groups to get active in their communities, on their own councils, and get them to debate publicly whether public money should be going into fossil fuels.

“If councils don’t have investments in fossil fuels then they’ll be very quick to tell you. And they will do, because everybody does. We’re working on tools to make it easier for campaigners to find that information out, looking at pension funds because that’s where a lot of the investment money is.”

Do people say to you: It’s all very well to divest, but what’s the point if we’re still using oil, coal and gas?

“We are very focused on divestment, rather than personal consumption. It’s very hard to make change until the political power of the fossil fuel industry has been significantly dented. Incentivising clean technologies and getting the investment we need to really transform our entire economy, are blocked by these incredibly powerful industries. And while individual action is important it isn’t going to take down the fossil fuel industry as quickly as it needs to be.

“Until we get massive investment in public transport or incentives for renewable energy, it’s going to be difficult for people to make meaningful enough consumption decisions to change the economy.

“Much of the discussion is now about the social value of investments. The recent Law Commission’s review questioned whether it is right that ‘fiduciary duty’ should just mean short term profit for shareholders. Should it include long term stewardship of both your money and the planet? The fact these questions are being discussed is a really important part of the narrative.

Do you see a relationship between Transition and the divestment movements?

“If you don’t have a Yes, then it’s much harder to push the No. If we’re going to deal with the climate crisis we need to shine a light on all the community projects that are working, so they can be rapidly replicated and supported to make change happen.

“Divestment could be a really interesting project for a local group – because it is about democracy and local participation in decision-making about where public money should be invested. Using the divestment campaign to build a community to do more of the Yes work on a bigger scale.”

Activism typically deals with heavy-duty issues. How do you keep going without being burned out, or oppressed?

“I go running!“ she laughs. “I think it’s about having a good group around you, who can talk and offer support. Also one of the reasons UK Uncut was so successful was because it challenged these big problems and organisations in a fun way.

“So whether you are talking about Sure Start centre closures, by setting up a crèche in an HSBC bank, or running sports days in Top Shop, activists know it’s important to make sure that activism is fun and engaging, because in the end if it’s not, we can’t keep on doing it.”