Paris Plan B - the untold story

At the end of November I went to France and Sweden. It was my first trip to Europe for 15 years. The first week I spent in Paris during the opening of the COP21 negotiations and then travelled overland to Stockholm to give a series of workshops and talks based on the work of Dark Mountain. More on that next year. Meanwhile here is a short blog I originally wrote for Bella Caledonia about those heady first days.


The last time I filed from Paris I was covering the Spring Collections. It is a long way from where I am now perched on a high stool in the lounge of a reconfigured hostel by the Gare du Nord discussing Why the Message Doesn’t Get Across with a sociologist called Jean-Baptiste.

However this is a report about COP21 that did not make the headlines, nor even the small print, when, for two weeks in December, 1000s of activists, campaigners and grassroots communicators converged on the capital to disseminate their messages of defiance, hope and renewal, in spite of a heavily-policed clampdown on gatherings and demonstrations.


‘Refresh the climate, rewrite the story’

I have never seen so many people online in one room before – blogging, tweeting, texting, emailing, Skyping, videoing  –  and it is only 7am. 600 of us are having breakfast in the co-working space of the alternative media hub of Place to B. We know we can’t just fix the climate by twiddling with the temperature dial as 195 world leaders are now doing at Le Bourget. We know we need to address its deeper causes; a debt-bound economic system, the myth of progress and our millennia-long separation from wild nature on which we depend for everything.


The millions of grassroots responses around the planet are too small and undramatic to fit into the dominant mainstream narrative. Nevertheless we are busy sharing them across tables – stories about restoring soil, challenging fracking, bearing witness from communities under fire and under water. None of us are here just for ourselves. We are speaking on behalf of organisations and networks which have brought us together in a way that no conventional social meeting or workplace could ever do. 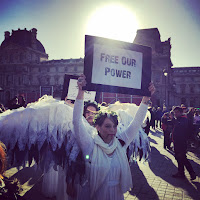 The first thing you notice is that everything connects. The second that there is no hostility.

'What I am waiting for is sincerity’, says Jeremy from the BBC, as we discuss how the story we are here to rewrite looks more like a global communications system, firing on all cylinders. What I am waiting for is a way to frame my convincing argument, my pitch. But I can’t. Because when push comes to shove what really matters is something that bears no relation to a newspaper opinion, and it’s a hard to describe how it feels when suddenly you don’t have to fight the person you are talking with anymore.

When you realise you are not on your own.

10,000 people are holding hands along Boulevard Voltaire. Angels flex their wings, a stream of bicycles flies past, a brass band plays; a newt-headed man from the occupation at La Zad gives an interview to a citoyenne with a video camera. Vans of riot police wait in side streets for the clashes that will come later in a flower-strewn Place de la Republique. I join the human chain between a row of Tibetan men, one of whom hands me a badge saying ‘The Third Pole’, and feel strangely at home.

It may appear to be the same but it isn’t the same behind the facade. The Tibetan plateau, the biggest reservoir of fresh water outside the Arctic and Antarctica, is warming at twice the global rate. We have been living as if our fossi-fuelled lifestyles have no consequences, but the consequences are now blowing back towards us. Some of us are no longer looking at hemlines. 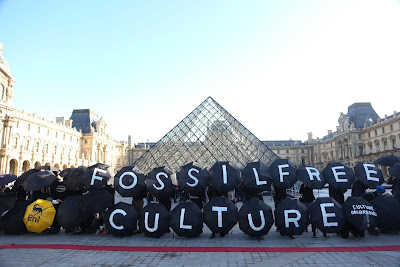 I could report on the Climate Games, the People’s Assembly, the Global Village of Alternatives, the documentary Demain, or any number of the workshops, talks or actions that are taking place on the edge of the official negotiations, but I have decided to stay here in the Place to B’s Creative Factory, where I work with an opera singer, two dancers, a novelist, an anthropologist and a cartoonist amongst others to create projects that explore ways to Dismantle the Buying Imperative.

There is a challenge we all face with this rewrite. We are embedded in a culture of market fundamentalism, just as we are in the ‘wicked problem’ of climate change. A capitalist economy is our default common ground, no matter how connected we are to ‘nature’. It is hard to communicate without feeling the pressure to convince and propagandise in a way that goes against our craft. It is hard not to sound like an ad.

Scientists plea for their terrifying data to be rendered into an acceptable narrative for people to ‘get’. We know we need a story that holds a ‘radical dreaming’ and touches the hearts of people, and that climate change is a symptom of a cause that corporate media cannot admit. Industrial civilisation has brought the living systems on which we depend to a breaking point - systems that do not operate according to our 21st technology, 18th century reason, nor our 4000 BC sense of godlike control.

In the COP21 deal there are blue sky pledges but no mention of how carbon reduction might be achieved on the ground in a world where everything we consume  is made possible by oil. The obvious ‘solution’ to powerdown our whole way of life was never on the table. At the COP21 ‘fringe’ however it is clear we need to do exactly that and undergo what some call decroissance (degrowth). To walk in the opposite direction of Empire. 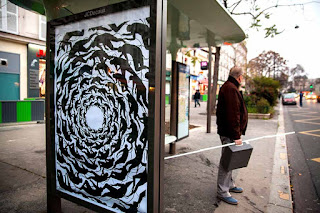 This story is made up of humble things: of cargo bikes and community orchards, of handmade bread and local assemblies, big picture vision, small everyday actions, a tale of sharing and restoration and sincerity and many other things besides. It doesn’t fit into a hash tag. It takes time to listen to. It challenges all the assumptions we were taught by our parents and teachers, and most avowedly, by our governments. There is no happy ending.

But there is a door to the future we can open that doesn’t depend on a mythical technology, that recognises, unlike the agreement, the rights of indigenous peoples, the forests, the oceans, all creatures: a culture that not only engages in letting go of its addiction to energy, but also in dismantling its powerbase from within, divesting its sense of entitlement, of superiority over all species, its extractive ego, its will to conquer, its baseline hostility.

On the walls of the bar there are small messages written by 1000s of individuals to everyone in Paris. They are written on bunting (from Scotland) and coloured ribbons (from USA). The people were asked:

'What do you love and never hope to lose to climate change?'


The Great Barrier reef
My country, Syria
Kindness between strangers.


The sound of a robin singing in midwinter.

Images: Fossil free action at the Louvre (Andrea Hejlskov) Kristian Buus) for Climate Games; one of 600 Brandalism posters posted on bus stops around Paris.
Posted by Charlotte Du Cann at 10:32