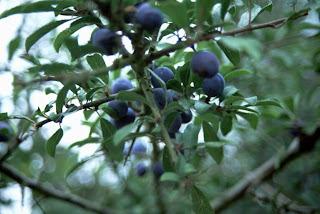 We had our first Stranger's Circle meeting last Friday. The Transition Circles started after Tully wrote a ground-breaking paper on the need to expand and explore the work of carbon reduction. A hub group formed in July called TN2 and this has since developed into the Circles, based in different neighbourhoods. The Strangers (after Stranger's Hall in Norwich, originally a meeting house for the Hugenot weavers), are a group of us that live in the hinterland of Norwich. Our first meeting was held in Shotesham and like the other groups, Circle West and City Centre, we decided to talk about energy.

After our shared meal in the kitchen (with Angie's delicous damsons for dessert - see pic above) we talked Electricity, mostly in relation to home heating. Already we're into October and temperatures outside are falling with the leaves. Last winter Mark and I had our heating on for one hour each day and we really toughened up. "It's important to turn everything into an adventure," I declared. Everyone thought we were way too extreme (though Elena said she and Alan were thinking of cutting out heating in the mornings this winter). We decided that keeping one room warm during the evening was the most efficacious way forward. Because the Strangers live out of the city we have an easier time with wood-burning stoves and can go collecting fallen wood or trees in our own gardens and hedgerows. It's also easier to get outside and have a relationship with the earth, the wind and sky which is the best way of keeping warm. Something about shivering indoors in cold, damp houses and not moving makes you just want to reach for that switch.

We owned up to other difficulties: non-green teenage sons, a clothes habit, too many hot baths in the wintertime. Each circle has its own style. Circle West is developing into a local support group, where ours seemed to contain seeds of political and philosophical discusssion within it. Tully brought up the question of social equity in relation to our pursuit of resources. Naomi brought up the clash between a new culture of limit and the concept of endless universal energy which lies within current spiritual thinking. Can they work together? Or do we need to review the way we think about energy and how it powers our illusionary way of life? In many ways it felt like the real discussion about fossil fuel had only just begun.

If you would like to join a Transition Circle check out the TN2 page on the TN website and find out when the next meetings are and their main subject for discussion.
Posted by Charlotte Du Cann at 16:02