On the Road (without a Car)

On World Carfree Day (Sept 22) I cycled cross-country to meet the Transition initiative, Sustainable Bungay who were celebrating the day by cycling to a pub called the Geldeston Locks on the River Waveney. Just as we set off to meet them Mark dropped his bike and buckled a wheel. “I’ll take the bus,” he called out to me as he wobbled down the lane. “How will we get back?” I yelled back. “I’ll ring Graham and Nicky!” he shouted as I pedalled on resiliently into the autumn wind.

15 miles later I met everyone by the Buttercross. It was, perhaps, the most beautiful evening of the year. The sun had been roaring all day and had gone down in a blaze of glory. The moon rose over the hill, the land lay tawny-coloured and breathing in the twilight. Warmth rose up from it as we cycled down the back road to Geldeston from Bungay, through the mill and down the track to the Locks Inn. Occasionally a car would stop in the lane startled by this sudden line of cycling people, laughing and talking, as wheels bumped over stones and veered into hedges.

At the Locks we were scheduled to meet the Zero Carbon Caravan, a group of cyclists making their way from Wales to Copenhagen for the Climate Change talks in December, entirely without fossil fuel. En route from Norwich however they heard they had lost their passage over the sea from Lowestoft and had been diverted to Dover. They had to make it in three days (“Three days!” exclaimed Margaret, one of SB’s veteran cyclists, “Do they know the hills in Kent?”). So we had our regular monthly Green Drinks and when it came to go instead of returning home we went back with Graham.

When I say went back what I mean to say is we canoed back down the river. Graham climbed skilfully into one canoe with the bike, and Mark and I climbed rather less skilfully into the other. We pushed off from the shore, there was a rushing sound as the boats entered the stream and then suddenly we were gliding out into the star-filled night. Great shapes of trees rose beside us - ashes and willow – as we moved by. The water brimmed right to the edges of the land and the stars and the branches glimmered in its dark surface that was as smooth as a stone. There was space everywhere as meadows water and sky merged together and in that space it felt as if a door opened. For a moment I didn’t know where or when I was as we paddled softly down the Waveney that could have been the Mississippi or the Amazon.

It was the moment of autumn equinox, the moment the light of summer cedes to the dark of winter. In that full-on mysterious planetary encounter I realised why all of us came out of our way to meet each other in Transition, in spite of all its difficulties and heartaches, why we took pains to cut carbon and struggled up hills to travel across the sea in a sailing boat. You give something up because you love the earth, and the earth gives you something in return. Something, if you thought about it, you were born to experience.

The next morning I helped Graham gather hazelnuts from his abundant red cobnut trees and as we patiently shifted through leaves on our hands and knees it occurred to me I would never have spent a long and (equally abundant) breakfast with him or canoed down the river had we driven our car.

So this week a month later I went entirely car-free. Being car-free in a city is not hard but in the backcountry where I live it’s tricky, especially at night. It’s one hour by foot round-trip to the Library (where I use the Internet) and four bus rides to collect my veg box and shop. Nevertheless I walked everywhere: mapped the neighbourhood for apple trees, picked the last damsons and blackberries, witnessed the gathering of starlings and jackdaws and the turning of the leaves, and met and talked with people I had not seen for months and would never have encountered had I taken the car. The discipline of a week was good, just like having that day was good. Because that way you start paying attention – paying attention to the things that really matter about being alive, right now on the earth where we all live. 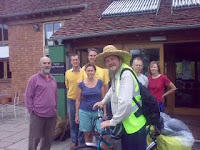 Left: Chris Keene of the Zero Carbon Caravan in Ludlow