Food in Transition: Moro East by Sam and Sam Clark 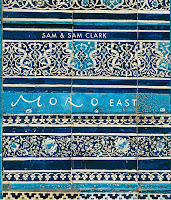 Food is one of the principle ways we can engage in creating a low-carbon culture. Cooking happens every day in our kitchens and what we buy and eat is in our own hands (or at least it needs to be!). In the following months the TN blog is going to look at some of those low-carbon food issues from home-growing veg to community orchards, from distribution hubs to fairtrade tomatoes. We'll be debating whether or not to eat meat or fish, drink orange juice or new world wine and most of all how we can be inventive with what grows locally and doesn't cost the earth. We'll also be reviewing some of the best cookbooks around. Here is one:

Sam and Sam Clark's restaurant Moro is famous for its cuisine deeply rooted in the Spanish and Muslim Mediterranean. Their third cookbook, Moro East, is set nearer home: in an East End allotment they shared with Turkish and Cypriot neighbours, exchanging recipes around kebab grills and great vegetables. The 150 Moorish recipes apppear amongst the allotments’ creative salvage and burgeoning plants - dishes spiced with rosewater, cumin, mint, pomegranate, as well as local poppy leaves, pea shoots and green tomatoes. The book is a poignant testimony as Manor Garden Allotments were later bulldozed for the Olympic Hockey Stadium.

Its essence, captured in Toby Glanville’s elegiac photographs – children playing amongst hosepipes, women making flatbread, men cooking over charcoal, fragrant dishes served on tin plates and terracotta, everyone eating together – however is not lost. It’s a picture of what a postcarbon future might look like.