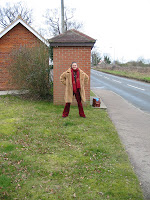 When the blog crew decided to try out a three day writing week, I suggested blithely that maybe we could take a cue from the last person’s post and write from that . . . luckily, I start my day with Kingfisher toothpaste. Mint, fennel, flouride free.

Fennel I reckoned was a good place to begin. A sun-loving, golden headed plant, tall, feathery, growing in great fragrant bands down amongst the East Anglian dunes, where in high summer I go collecting its spicy seeds for curry dishes and a cooling and drying medicine tea.

Everyone’s talking seeds in Transition right now: Jane’s planting for the Allotment; Erik in "zero-sweaters" is sowing a packet a day to keep himself in vegetables all year; Mark and I are planning our Herbs-for-Resilience Toolkit. At Sustainable Bungay's core group meeting on Tuesday we discussed our Mayday Give and Grow Seedling Swap when all those resilient veg and flower seeds will have sprouted. Today I’m off to see Becky at the Greengrow co-operative in Ilketshall St Andrew, where they are turning a big arable field into a market garden and apple orchard. I’m giving her a hand with setting up some press and publicity. Put everything on a blog, I'll say . . . 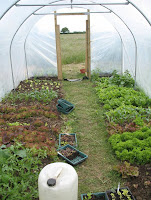 And then just as I was about to do a whole seeds thing, Jon posted another blog. Churches and birches! And I had to change track, towards the invisible worlds. Luckily there’s another part that fennel plays: one that's not so well known. Giant fennel from the Mediterranean once formed the Dionysian thyrsus, the staff that spearheaded the Mysteries. A procession that led down into the seedstore of the earth where the mysterious life-in-death, death-in-life process was revealed– a celebration that was performed for thousands of years in all corners of the earth.

That’s the story that plants tell us. Life works because of the connections you can’t see with your day-time eyes, because of what happens underground.

Only artists these days go down into the dark places. Because writers, musicians, performers play with the unknown. Face the music, dance on the edge. Only if you are in play, in a state of creative chaos where limits are broken up, can any new solutions emerge. Trouble is we’re living in a world where the dominant hegemony insists Powerful People have got it down and are In Control. It's been that way since civilisation began.
Yesterday some of us artists-in-Transition went to our second rehearsal for the Low Carbon Roadshow in Tom’s garden. We're planning to do something for the Earth Hour on Saturday. When we first met at the Norwich Arts Theatre none of us knew what would happen. We found ourselves enacting the future, imagining who we might be in 100 years from now. What our messages might be for ourselves in the present. 2110 appearing in 2010.

Climate change and peak oil mean that the future is not going to be that present individualist story we live by no matter how many times the Powerful People repeat it. “We’re making it up as we go along!” as Tom said. Most people feel pressured to conform to this old narrative (or it’s the end of the world for you!), creative artists can’t help following a different drummer. They know that the future is embedded in the present, and every move we make now affects what follows in our tracks. 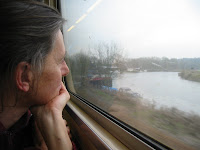 Somewhere in their bones they remember that ancient plant story and know that time in fact is not quite as linear as historians and politicians would like us to believe, nor is matter as concrete as some scientists tell us. That’s why creators are inventive, fluid, tricky. Appearing only when they need to. Making it up as they go along, with a few ancestral tricks up their sleeves. They are holding the door open for something else to happen.

What kind of future do we want?

Which way do we want the show to go? A tragedy that ends in fallen kings and queens, a comedy that ends in a round dance, a medicine show which restores our lost connections, or a mystery play where the plant that sustains us emerges from a fennel seed, like the sun?

On the Low-Carbon Road to the Roadshow: catching a bus for the First Rehearsal, on the train to the Second. Polytunnel at Greengrow, Open Day, April 10, 10am-3pm. Ilkeshall St Andrew.