Listening to Pablo Neruda in the Rain 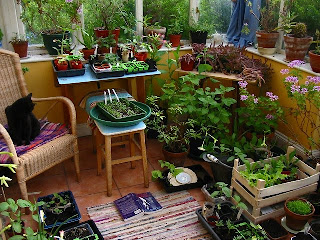 Something was not right. I had been unwell it seemed for weeks, struggling with fevers and aches. My mind felt blank, my first-skin body besieged by the old and the cold. But last week something turned around. I’m not sure what lit the switch: it could have been Elena’s fiery, sour-sweet soup at our Strangers’ supper, or Margaret’s sudden kindess at the Bungay Plant Swap (Why don’t you go and sit inside, she said, where it is warm). Or maybe that lovely herb-dazzling jelly Mark made with water mint and ground ivy, Or maybe it was the rainy afternoon I sat in the conservatory surrounded by small growing shoots and Mark began to read the Memoirs of Pablo Neruda out loud and I found myself exclaiming, Oh do you remember those rivers with their flat white stones, those pepper trees, and the way the men rode into the square on chestnut-coloured horses! As Neruda’s poetic words transported me to Chile and the deserts and forests where we had once travelled.

the places we live in. Space, style, appliances. “Is it because your furniture is comfy?” asked Ann as she scoured the list in the workbook. “Oh no,” I said “My furniture is really uncomfortable. “And your bed?” “It’s horrible,” I laughed. My third skin, the house we found eight years ago, however has a conversatory and I think it was this light-filled glass room that made us decide to stay. We had pocketfuls of seeds from our travels and Mark dearly wanted to plant them – desert bluebells from California, coral beans from Mexico, sacred datura from Arizona. Moving all these years, living in cities, we had never grown anything before. The conservatory and the pots around the house became our living library. Everything we had learned about plant medicine was catalogued there. Growing plants made returning to England possible.

One thing I’ve learned from shifting from place to place: the world doesn’t change course because of reason and facts. Poets know that, which is why empires, which are built on reason and facts, hound them so. It turns around because of small unexpected things, events that remember us: soups that reawaken a desire for life, words that break open hearts that have become frozen, an ordinary house that welcomes you home down an East Anglian lane. 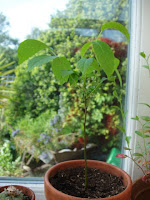 The Walnut Tree
This year there are some unusual leaves growing in a small pot in the conservatory and here is the story that goes behind them - a letter I wrote in September to all the Transitioners who had decided to cut their carbon emissions by half the national average over a year.

“Today I planted a walnut. I bought a stack of walnuts from a roadside stall outside Beccles. They were small but delicious and as I sat cracking and eating them on my doorstep I thought of Rob Hopkins and his walnut trees, I thought of Roger Deakin who loved walnuts and lived (and famously swam) here, and of Dr Bach whose walnut medicine is for those who are resistant to change. Amongst all these mental arguments about climate science and resilience indicators, carbon sinks and footprints, I suddenly felt I had to do something Transitional that was connected with the physical earth, something that would make sense of what we are doing and take root in the real world.

Who knows whether the seed will sprout. Who knows whether we will succeed in our venture. Whether we will be able to hold together and create a new culture. I planted the seed because I needed to make a strategic act. To do something that had beauty and meaning. Even if my small carbon-cutting enterprise goes unrecognised, this walnut would exist. I would be able look back and say, well at least I planted a tree! (a very lovely one at that).

Norwich was once a city of orchards. Around the country (including some Transition initiatives) people are mapping their neighbourhoods, planting communal orchards in vacant lots, finding trees that bear fruit. Sometimes they go out together in gleeful bands, and glean this harvest that most people do not even notice.

When the walnut grows strong I’ll plant it somewhere in my neighbourhood. Maybe one day someone will come along and say: Hey that’s that Transition Walnut Tree! Remember that time when a gang of crazy people in Norwich decided they would swim upriver against the flow, and cut their carbon for real?

If you have a moment have a look at http://www.growsheffield.com/. It could teach us some things.”