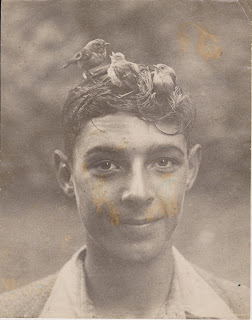 Can you be here as the bringer of space in any situation? Eckhart Tolle

Each dawn I wake to cacophony. In May there were sweet sounds, but in June there are cacklings and croakings and cawings. The jackdaws are fledging. For weeks they have been in my chimney, their parents flying around the neighbouring fields and returning, jumping in and out of that small space. Jack, jack, jack. This morning they are out on the telephone line: all eight of them, making an unholy din. How eight of these large sooty birds can fit in that brick chimney I cannot imagine. Now they are taking part in a flying lesson: how to crash land into oak trees whilst making a loud running commentary, the way all members of the crow tribe love to do.

Buckminster Fuller once said modern people are like birds in an egg: we are hatching, but we don’t know it yet. We think our world is coming to an end. Food is running out, space is running out, what can we do? Without thinking we start tapping against the limits of our containment. Breaking through the shell. I think we are like those immature crows, stuck inside a dark chimney. It’s cosy but rather squashed and stinky in there. We get fed, but we’re hot and restless inside, fighting like mad with our brothers and sisters. Peak oil! Climate change! Economic collapse! Environmental disaster! There’s a whole new world out there: a world of lightness and air. Somehow we’ve got to get out of that hole.

This picture is of my father when he was young, with three baby greenfinches on his head, the moment before fledging. It was snapped by a local reporter in Sussex where he lived before he went to university and became a lawyer in the city. When I was a child he would tell me stories about the nature he loved in those years, the birds and the trees, about the French revolution for which he had an unusual passion. Like everyone else, I inherited my father’s world, with its rules and regulations, its traditions and teatimes. This world governed by bourgeois values, the world of possessions and form. But something in those stories about the earth, about people breaking out of limitation, out of an unjust rule, made me quit that comfortable nest and seek the light and air. Within a generation, those values disappeared in me. 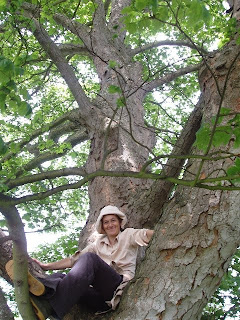 Millions of us on this planet dream of freedom, of a liberation from that old restrictive mindset that holds the physical world in chains. We don’t know what shape it will take. We look back at History and we shudder. We look forward and see a blank space. What can we do? We can meet within the frame of Transition to see our predicament in a way that is not bound by form. By our compulsion to repeat what we have been told by our parents and teachers. We can create conditions and ways of exchange that are not hostile. We can provide the space and the time to allow something else to happen. Something that hasn’t been done yet. Because even though people may live bound by the laws of the ancien regime, they also carry the dream of the Earth and self-governance of the people within them.

The dream they sometimes tell their children, because they cannot imagine how to live it out themselves.

Today Chris and Tom are coming to visit us and we’re going to rehearse for the Low Carbon Roadshow in the garden. We're planning to do some street theatre for the Community Arts Fair Helen was writing about that the NR3 group are hoping to organise. They’re having their first meeting tonight in St Augustine’s Street. We’re planning to create a play for Transition. It’s new territory for all of us. We’re going to start where we left off at The Earth Hour outside the Forum at Spring Equinox. Four beings coming from different futures a hundred years hence, returning to the present to work out a way forward that will be of benefit for all beings – not just the privileged few, not just the humans. A new earth. A leap from the immense space we hold inside us, from our imagination, into blue sky.