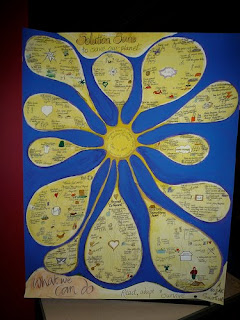 There was a seismic shift underway. This was the fourth conference and Transition was no longer at its start-up phase. There are now 350 official initiatives world-wide and hundreds more beginning. Some of these initiatives have been active for years (TN has been active for three). So we’ve got experiences and feedback that are meaningful for the whole enterprise. Up to this point Transition has been structured by a 12-step process – a guide for people and communities starting to respond to those drivers of peak oil and climate change (and the “third driver” of economic breakdown). This year the Transition Network broadened its territory. We were no longer on an energy-descending ladder but standing within a complex weave of essential elements: the subtitle of the conference was introducing a new way of explaining Transition.

A Pattern Language was inspired by an architectural book of the same name written by Chritopher Alexander out of Berkeley in the 70s. Almost an academic cult classic it takes key elements of buildings and settlements, villages and cities and looks at what makes them work. Why, as Rob Hopkins says in his introductory workshop, walking through Sienna you feel joyful and Slough wretched. The book’s dynamic comes from a system of cross-references – a forerunner as Hopkins pointed out of the hyperlink process on computers. How everything from sunlight through windows to market squares relates in a harmonious way, so that you want to be in those rooms and neighbourhoods in the same way you might want to be in a wood or by the sea. It’s a design system, but one that has been organically-formed. It takes as its strength thousands of years of people living together. A vernacular way of life. 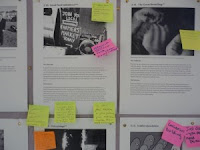 The pattern language of Transition was displayed down one of the corridors at the Seale Hayne college and so we walked down them together, discussing and writing notes over them. Because with our experience we can respond to this new structure, strengthen and enliven it. This is not an empty workshop exercise: it has meaning because we are attempting something new. We’re feeling our way to reassemble some key elements that have been within humanity for thousands of years and we’re looking at the ones that work and make us feel OK about living together within a time of turbulence, a time of radical social change. We’re looking for some base notes that underpin a new kind of society that speaks to people everywhere and can be as diversely spoken (as it was at the Conference) everywhere from Norwich to Sao Paulo, from Bungay to Fife, island, city or remote village, north or south. 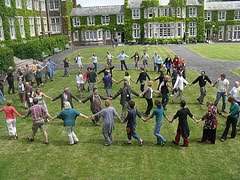 So where the original Pattern Language is based on things, on nouns, Transition’s Pattern Language is based on activities, on verbs on doing things together. You can download the work-in-progress here (8MB pdf). Many of these are the words and phrases we have had quickly to master and manifest: speaking in public, working with local businesses, great reskilling, great unleashing, food coops, energy descent action plans. Each of the 63-patterns contains a challenge and a solution and all follow a sequence of 6 evolutionary phases - from the groundwork before an initiative begins to Scaling Up. It starts with the personal shock of peak oil discovery and ends where grassroots initatives begin to dialogue with the “top-down” structure and influence how things can shift from an oil-dependent civilisation to a new resilient way of exchanging and interacting as a people, in synch with the eco-systems of the earth.

Transition is about working-together in the face of immense physical and emotional challenges, learning to take matters into our own hands. It’s about creating a way of living that is fair both to the planet and to its peoples. One in which we are by virtue of our task capable of divesting a heavy, materialistic way of life for one of necessary lightness and simplicity. One which will require us to let go of our illusions of grandeur and separation and face a common reality - to transform within and without us the consequences of the power-hungry, acquisitive, high-drive, domineering Western world.

We need to be conversant, fluid with this language because it is what we have in common, what will enable us to hold together when everything else is falling apart. It is the language that makes it easy, for example, for 300 people from diverse places to be in complete harmony with one another. This is because we are speaking to one another from the material. Not just our mind’s opinion of Transition, but words that match our physical and emotional shared experience of Transition – a language spoken by people who matter, who have the matter in hand. Patterns of language that configure a different world. Because the network of Transition is communication, and we can’t weather this shift on our own.

Why we can’t create the future on our own I’ll be reporting about tomorrow . . how the 2010 Transition Conference received its own shock and how some of that reality came home. Meanwhile if you'd like to read more about the Conference do check out Rob Hopkins's blog http://www.transitionculture.org/ or the Network's coverage on http://www.transitionnetwork.org/