On the Road (to Totnes) 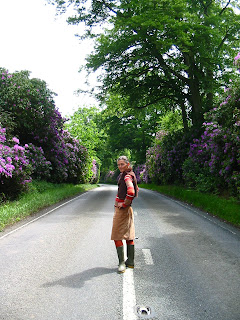 I hadn't been out of the region for a long time. In fact this journey to the 2010 Transition Network Conference was going to be my third venture beyond East Anglia in eight years! Six hours cross-county in midsummer by train. Moon daisy country, elder blossom country.

I had forgotten: England is beautiful. Even before the train drew into Newton Abbot we had been past the green Chiltern hills and the willowy Thames, through the tree-clad valleys of Somerset and along the boat-sprinkled estuaries and red-cliffed Devon coast. It's a cliche I know, but the sea really did sparkle, and those hills did shine. It took my breath away. 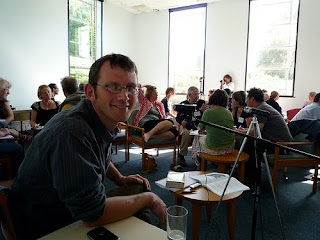 There are several highlights I'll be reporting on during the next few days: Pattern Language (a new way of explaining Transition), Stoneleigh's shocking report on the Economic collapse, meeting my old friend Adrienne Campbell from Transition Lewes and how five of us went swimming without our clothes up the River Dart.

Meanwhile here's a pic by Ed Mitchell of the man in action at the introductory workshop on Pattern Language. Stay tuned!

On the Rhododendron Road in the East; Rob Hopkins at the Seale Hayne Agricultural College in the West.
Posted by Charlotte Du Cann at 12:50