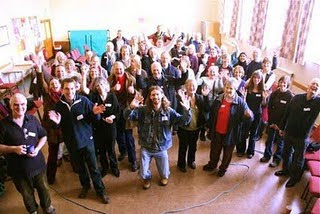 Today I wanted to write a post about one of the 63 Patterns. I was planning to write about Critical Thinking (1.2) . But then I put my hands on the keys at sunrise this morning and this is what came out. As Erik said in his post on permaculture and growing veg: what you do is not always what you plan.

At first in Transition you go to a lot of meetings. Meetings are Transition for a while. You learn quickly about facilitation and go-rounds, about plenaries and agendas. You discover the joy of being able to share the richness of your experience, of being listened to. Sitting in a circle in the first days of the Heart and Soul group in 2008 it felt everything was possible. That the butterfly that was talked about in so many of the books we were reading at the time was forming itself in the room. We’re the imaginal buds, we said and laughed. 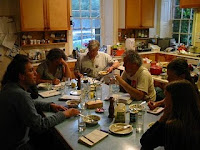 Later you discover the joy of sharing food and visiting each other’s houses. However you can’t help but notice how some people are eloquent and committed and some seem just there for the ride and are not interested in change, or doing any inner or outer work. Sometimes some of that talking gets on your nerves. Sometime you get on people’s nerves. There’s a tension between consensus and control. Between the people who want Transition to be part of the conventional world, and those who feel we should be starting over. After a while you think maybe this group thing isn’t the best way to get on. Shouldn’t we be doing something together?

Sometimes those meetings we all went to worked beautifully, and sometimes they really didn’t. People clashed. There were unbearable tensions, “atmospheres” someone called then. That’s a good word. It conveys the feeling-tone that came out as ancient power struggles enacted themselves in the room. As loud voices and strong wills quelled projects and good intentions. That dinobrain at work ensuring that the world would not change. People left. I left. The elephant remained in the room.

There was a poem I always felt like quoting, but never got round to it. It’s called A Ritual To Read To Each Other by the American poet, William Stafford: 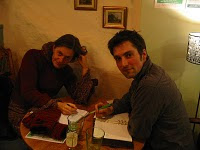 If you don’t know the kind of person I am
And I don’t know the kind of person you are
A pattern that others made may prevail in the world
and following the wrong god home we may miss our star
We have to know what kind of people we are lest we get lost in the dark. And that’s a hard thing to do in a group. Especially one that is based on a new idea, rather than a traditional kinship. It feels like Transition could hold us with its great sense of possibility, the way it opens everything up. And it does for a while. Just as the “technologies” of open space and the friendly sharing of food in each other’s houses kept us meeting. But those feelings of cameraderie are not strong or deep enough for the shifts we need to make. We need to bust out of individualistic thinking and not be dependent on each other for emotional support. It’s easy to be superficial in a group for the sake of fellowship, to go along with what everyone else is saying so as not to be excluded and cast as the “difficult person”. To conform to prevailing patterns that fit the old meeting rooms we sit in. What’s not easy is to find a medium in which our common destiny is realised.

We can meet and get through the agenda. We can design community events and discuss what kind of legal structure we should adopt. But to really establish these 63 Patterns without being ousted by those kept in place by an old antagonistic mindset, we need to meet as people-in-Transition. We need to think together, as opposed to sounding off as isolated units in a group.

Last week Gary came over and we sat in the entrance of the tent and discussed Transition and conflict for five hours. It was a successful meeting. There were no clashes or tensions. We felt expanded and not constricted in each other's company. You could say it was because our difficulites were the same and we had the same feeling for Transition (as well as being an occassional blogger and founder of Transition Diss, Gary is a trustee of the Network). Because we shared similar territories, originating from big cities (New York and London) and had spent our lives working in communications. Or loved dancing, or because our conversation happened by the sea, in a garden outdoors. 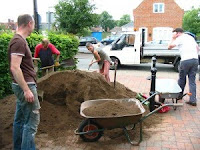 But mostly I think it’s because we put our heads together and looked at the situation from a big perspective. We were awake to the fragility of the moment. We are all part of an intelligence, Gary was saying, that is moving from competition towards co-operation.There’s a lot of space in that idea. That’s a neo-cortex conversation if you engage in it. Most of all it’s realising that for meetings to run successfully, we first need to meet.

Imagine if twelve people could think co-operatively, or a whole community. Or the world. 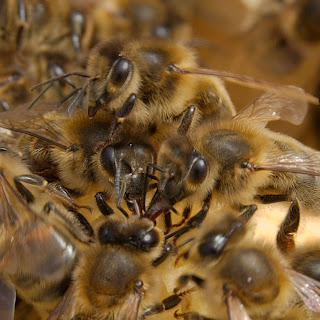