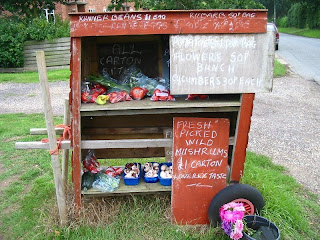 Welcome to our first features week on the blog. We’re starting with the subject of Food in Transition in celebration of the Food and Farming Group’s successful funding bid for their four projects, including Norwich’s first CSA (Community Supported Agriculture). During the week we’ll be looking at some of the food buying and growing patterns that form a key role in the social shift of Transition.

I first became aware of these “patterns” when we discussed Food in the Strangers’ Transition Circle in January. Tully had suggested we bring our weekly shopping lists and pay attention to them in terms of carbon reduction. Though we’d shared our electricity bills and car log books when assessing Home Energy use and Transport, Food felt different somehow. More complex and yet more in our own hands. I wrote the week’s transactions down and was surprised how many there were: grocer, fruiterer, market garden, veg box, farm shop, roadside stall, hedgerow.
Because it was not always so. I spent part of my working life writing about food and style. I ate in a lot of swanky restaurants and cooked (and styled) a lot of glamorous recipes. I lived in a world that thought nothing of paying $100 to eat the rare and dangerous fugu fish in New York, or a 17 course meal in Japan based on autumn leaves. And although travelling for real definitely altered my outlook on life and I have eaten a lot of humble rice and beans since, it wasn’t until I took part in Sustainable Bungay’s Growing Local food conference in 2008 that I became aware that something radical on a social scale needed to happen.

Josiah had invited several speakers for the event, including Mahesh Pant from Grow-Our-Own in Norwich and Clare Joy from Organic Lea in Walthamstow. Tully Wakeman from East Anglia Food Link opened the day and spoke about peak oil and its relationship with agriculture. He talked about the effects of our diet on the land ( 70% of grain grown in East Anglia is for animal feed) and asked if pigs were fed soya from the rainforest in Brazil could they be strictly called “local pork”? In an energy-scarce future we’re going to have to eat lower down the food chain, he said. Less meat, less dairy. 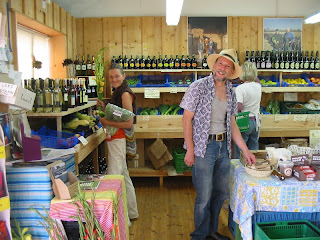 I had been a vegetarian for years by this time, and no longer shopped at supermarkets, so this news was not revelatory on a personal level, it was cultural. I had not joined the dots about agriculture and oil before. Or realised that the crops growing in the fields were for chickens. As for changing the national diet, to deliberately eat like peasants in a culture that was fixated on feasting like kings? This would not just be a matter of style, it was going to need some kind of seachange.
Food is one of the clearest ways of “getting” Transition. If you want to become aware of the ramifications of peak oil and climate change you have to go no further than your plate. Deconstruct the next dish you cook (or order). Find out where the ingredients came from and how many procedures it took to appear before you, and you can see global industrialisation at work. Transition aims to bring those ingredients a lot closer to home. So that food can be grown, produced and sold within a short (preferably walking) distance. Or at least if it has to come from far away (e.g. rice) it's fairly-traded, organic and hasn’t been flown in by plane. This is not just about taking responsibility for the waste (production and packaging), high resource and water use, soil depletion and the effects of pesticides that our modern food system wreaks, it’s also about forging meaningful links with life, with the place you live in and with people.

You can’t get more disconnected than our present system. Food, sealed in plastic, kept in large windowless hangers with artificial lighting, where hundreds of anonymous people move silently from one aisle to the next. We’re all foolish consumers in this world: we grab junk food without thinking, or spend hours obsessively following complicated recipes, like cooks out of a fairy tale. 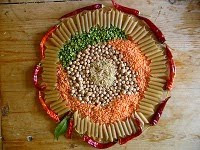 Somewhere there is a sane and clear way to downshift our eating patterns, to decarbonise our agriculture, and get ourselves back on track with the eco-systems of the planet. That big corporate-driven system is hard to change from the outside as an individual, even as a grassroots organisation, but any of us can reconnect at any time. “Vote with your fork, ” advised the food writer Michael Pollan, when asked how to help the vanishing honeybees. “Three times a day.”

Reconnection gives value and meaning to food. But most of all it gives us back relationships that were once severed – relationships with the vegetable kingdom, with the creatures, with the weather, with the people who tend plants, who work with their hands, baking bread, collecting fruit, selling veg and rice and beans. And it gives back relationship with ourselves, as we learn to swap dishes, seeds, cucumber plants, plum jam, foraging skills, our experiential knowledge of the world. As we put our attention on the stuff of life and all its vital exchanges - so more of it can happen.

In the next ten days on This Low Carbon Life the TN blog crew will be looking at some of the food buying and growing patterns that make up Transition. We’ll be visiting some of the outlets in Norwich and in the hinterlands, as well as the ways we can take food production back into our hands from foraging to wholefood co-ops, from pig clubs to local bakers. Eat with us. Stay tuned! 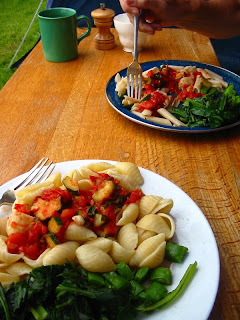