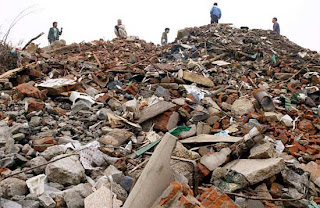 We live in a throw -away land. We chuck what we don't want on the dustheap and replace it with something new. Trouble is that dustheap has grown so large it's started to seep into our lives. It’s poisoning our water, contaminating our bodies, killing off the natural world. We're not paying attention: we’re distracted by the soap ads and the shiny stars and power figures on our screen, busy upholding a mindset that says we have to possess more and more, instead of getting back into balance - teaching ourselves to live with less, value what we have and transform what we no longer need.

The stats we know: we produce more than twice the amount of food we actually consume and waste a third of the foodstuffs we buy. We eat a highly extravagant diet, high in meat and dairy. We eat in profligate take-aways and restaurants, where sandwich crusts are routinely discarded by the ton each day. There are millions out there starving and millions here overeating. But, even though we might address these things personally, it's not just consumers who throw food away, or supermarkets that encourage people to buy more, restricted by sell-by dates, encouraged by special offers. Over-production is the key element to the global food industry: the more you waste, the more you need to produce, the more profit corporations can make. While you are eating your fish and chips, happy in the thought the beef fat it's cooked in is going to become bio-diesel, 40 to 60% of all fish caught in Europe are being discarded - either because they are the wrong size, species, or because of the ill-governed European quota system.

Walk along the edges of the potato and onion fields in East Anglia and you will find thousands of assorted, small, marked, "wrong-sized" vegetables that didn't make the grade going to rot in the winter rains.

Or maybe you won't. Maybe someone else got smart and has started to pick them up. 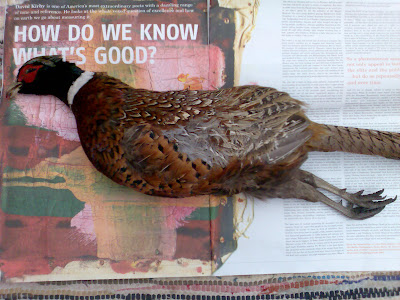 Getting smart about food waste is a point you get to when those mind-mesmerizing stats become action.. Last summer I was working for the waste management social enterprise Bright Green at the Latitude Festival. I was standing with Mark, like a pair of vigilante vultures at the Recycling Station in the Families camp site, occasionally pouncing on those should-know-better-slouchers who slunk past and left their bin bags unsorted. My eyes widened as tents, chairs, mattresses, clothes, sheets were dumped in a great pile without a quiver of shame. But most shocking all what was going into the food waste bin. At some point I cracked as I witnessed a whole side of smoked salmon being tossed in amongst the garbage: I put my hand into the bin and started to pull back out supermarket packs of organic avocados, strawberries, half-full bottles of wine, whole loaves of bread. We dined on it for a week.

Later that winter I ate my first roadkill . I picked up a dead pheasant, and like Alice in Wonderland found myself entering another world. Eat Me! said the bird in my hand. It's a boundary you cross. We live in a world where these boundaries keep us separate from real earthly life where death and dirt and gratitude for everything on earth lives. Don't go there, says our moral upbringing. This not your property, not your business, not nice, or proper or clean.

Freegans cross this line everyday; some because they are hungry and poor, some because they are activists, like Tristram Stuart ( Waste: Uncovering the Global Food Scandal ) and working to put a crooked thing straight. Stuart has fed himself on throw-away food since he was a student and recycles food waste by keeping pigs and chickens in his back garden in Sussex (a practice now forbidden on a commercial scale by European law).

In the space of just two hours in December 2009, in partnership with FareShare, Save the Children, ActionAid, and This is Rubbish, he and his team fed 5000 people in Trafalgar Square with free hot curry, bicycle-churned smoothies, and three tonnes of fresh groceries, using only ingredients that otherwise would have been wasted. The Feeding the 5000 team have now launched A Taste of Freedom, turning unwanted quality fruit into fruit-based ice-cream-like treats that kids find irresistible, contributes to their 5-a-day, and raises awareness about food waste. In cities around the UK (including Norwich) the social enterprise Foodcycle collects waste food from local outlets, cooks it in unused professional kitchens and redistributes it to those who need it most.
When I looked at that salmon amongst the wet sandwiches and coffee cups and hooked it out, waste was suddenly not about stats. It was real.

Somewhere where I had been living in my own micro-managed world, shut off conveniently from everyone else, the line broke. It was not just my personal waste problem, it was all our problem. That’s when I found the free food on my plate. You think it’s about giving, but actually it’s about receiving.

You think it’s just physical, but it isn’t, it’s metaphysical. Which is why ancient and native cultures have scavenger gods in their pantheons: raven, coyote, scarab beetle, jackal, vulture, condor.
May we be truly thankful.

In order to reconfigure our world, we have to let go and let in, enter the process of transformation. We have to enter into the kinds of exchange that occur naturally within the soil and in our compost heaps. This is not just about doing the four Rubbish Rs and getting smart about anaerobic digestion. We have to become alchemical beings ourselves, stoking our inner furnaces with old thoughts, emotional patterns, ways of being, fuelling our lives with our own refuse. Within our culture, the poet and activist Gary Snyder wrote in The Real Work, we should act as fungi and insects in mature forests, liberating energy from the dead trees and animals that lie on the forest floor. We need to liberate energy from the past and give energy to the living, and thus become symbionts rather than parasites on the earth. 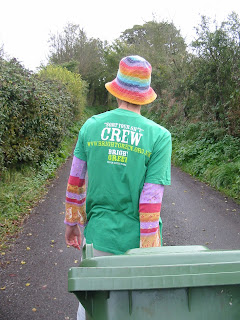 This week I came home with my hands full of food that people had given me out of the kindness of their hearts: perfumed quinces, Japanese burdock, home-made chutney and ginger cordial, beyond-its-sell-by date pesto and avocado oil, a bottle of red wine, tomatoes that had split in the rain. I came home with sweet chestnuts and wind-fall apples from the neighbourhood trees in my pocket. I came home with an unexpected golden afternoon, with a glowing half-moon appearing in the darkening sky, with a fresh breeze. I sat down to supper and everything tasted good. I licked my plate clean. Nothing went to waste.

(originally posted on the collective Transition blog, This Low Carbon Life for a week on Waste 2011)