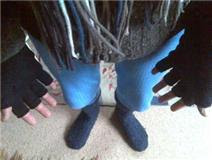 Suddenly it came as it always comes one moment in October. I was standing in my neighbour's garden at six in the morning in the dark with the alarm bells ringing wondering whether there was a burglar in the house (they were away) and I realised . . .

This time last year as we were warming up to our Low Carbon theme there was a flurry of emails in the TN2 google group about that key peak oil-and-climate-change subject, central heating. We were all putting off the switch-on moment, swapping stories of waterbottles, woollies and stern morale. Stuff it said Elena at some point in the October shift. It's 14 degrees in the living room and it's going on.

We persevered, keeping ours off, only switching it on to dry clothes when there was no wind or sun outside, as the gauge slipped further and further down, hitting an all time low around February at 7 degrees. We wanted to experience what winter was like without oil. Dealing with the cold formed the backbone of all our Transition Circle meetings. And something in those communications, our ability to write about it on the blog, enabled us to keep going. What would this year be like?

Like all physical memories, you tend to forget the harshness of winter when it's summer, even a damp, grey English one. Yesterday as I walked down the lane, I couldn't go into Indian summer denial anymore, it was a serious autumn day. The ivy flowers were buzzing with the last of the summer insects: bees, hoverflies, wasps, hornets. The hedgerows were crackling with blackbirds after the haws. I was wearing two cardigans. When I got back from posting my blog, Mark was energetically sawing up dead elm branches.

"Chris just rang," he said. "He had an evening celebrating his new wood burner with singing and friends last week."

It was our first fire of the year, stoked with foraged ivy, elm, oak and some birch and ash logs from last year. The stored sunlight poured into the damp cold room and made it come alive. There is a certain attention you pay when you're by a fire. The heat enters your bones in a way a radiator never can, just as standing under the shade of a tree cools your body the way no a/c can. To live with winter cold means you have to be active, rather than passive. And just as chopping wood, energetic walking, deep engagement in the physical world brings its reward, so gatherings of people in the colder months take on a different collective mood. A kind of singing together.

We've have several this week: Green Drinks on Economics and Livelihoods tonight in Bungay. Low Carbon Cookbook meeting in Norwich on Wednesday, taking part in a Transition workshop at the Waveney Rural Summit and Bungay Community Bees outing to the Vanishing of the Bees to Poringland on Friday. We'll be reporting on these this week as well as looking at the "Big Society" and urban agriculture. Stay warm. Stay connected!