Looking back, Looking Forward - A Year of This Low Carbon Life 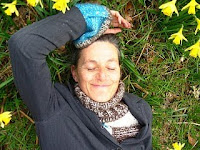 Today this blog is one year old. We started out with a party held in an art studio off Magdalen Street, and ended with a street fest down there. In between we went just about everywhere in time and space.

We wrote for a week, for three days, on Sundays. 12 contributors. 300 days. We organised topic weeks, ranging from Flying to Inner Resilience, We looked at allotments, A Pattern Language, breakfast, community, climate change, deadly resistances, ecology, flowers, food (a lot of food!) and all the way down the alphabet (check out those labels!). We did it deeply, broadly, lightly, at length, in short colourful bursts, in all seasons, all weathers. We were serious, funny, beautiful, challenging, philosophic, practical and cosmic. We photographed ourselves, each other, in our kitchens, our gardens, in the street, in the wild, on the beach, dancing on the edge. We paid attention and held many things within our certain downshifting gaze. 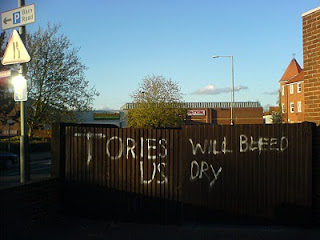 This week we’re celebrating the year in a retrospective. Each of us are selecting one of their favourite posts and introducing it during the following fortnight. It’s a hard call because there are so many to chose from. Different outlooks, different styles. We deliberately have no censorship or rules about content or length. So long as it’s within the frame of Transition and carbon reduction, everyone writes what they like – it’s an “experiment in community blogging”as the intro to this site says. Creative diversity at work. This is unusual in an era when most communications (including in Transition) are more interested in brand marketing. Saying what things should be, rather then how they really are. This Low Carbon Life is not-so-strictly editorial. We’re communicating what Transition looks like, feels like, tastes like through our own personal experience.

So looking back it’s hard to choose because people saying how things are is valuable and it’s the mix of pieces that make this blog work. So as an editor, I like everything, especially when the writing is original and inventive and there are ideas and info in there that other people might not have thought about before - from the practical (John on lawnmowers) to the quirky (Elena on her bike). Striking photographs. Reportage. Pieces that make you look at the world with a different eye.

As a reader I enjoy the deep stuff, like Tully’s three pieces on economic breakdown in March, Andy on health and the pharmaceutical industry. Erik's scientific and metaphysical pieces on the earth's carrying capacity. I like the pieces when people put themselves on the line and say what things feel like, where there is passion and integrity and intelligence.

But most of all I like surprises. I like to click on the blog and see something I don’t expect. Jon Curran riffing on some graffiti he found on the wall in St Benedict’s Street, Mark photographing his long johns in Men In Tights, Chris cross referencing rainwater loos and Henry Thoreau, Andy and Helen singing a rainbow song . . . 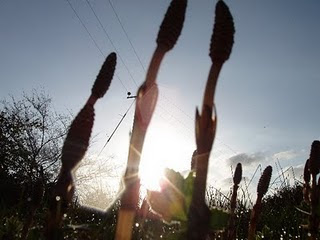 Photos: me among the daffodils in April; graffiti noticed by Jon; Helen's dog in January snow; Mark's view of emerging horsetails in May.
Posted by Charlotte Du Cann at 18:59