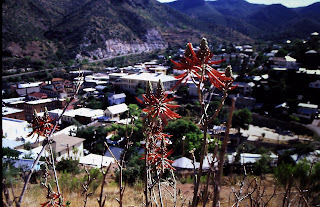 The sky island rises above the desert floor; a ring of mountains known as The Mules. The town within its rocky arms appears, at first glance, unremarkable: a collection of small wooden shacks scattered up a red hillside, down a gulch, with narrow steep streets, skinny metal staircases, a red-bricked main street with a few old-fashioned storefronts; an alternative cafe, a co-op store, a library with oak floors, a parking lot shaded with ash trees and desert willow. By the highway that winds through the mountains there is a “hell’s hole” where European immigrants once mined for copper; in the abandoned gardens the fruit trees they planted still grow - pomegranates, mulberries, figs. Everyone that lives here has been somebody somewhere else. One day they woke up in the city and the desert called them. They got sick, or cried too much, or had a dream, or like me, met someone on a film set who said it was funky place full of artists, full of thorny attitude.

There is something that calls you: in the luminous space that surrounds the border town, in the mineral mountains, in the prickliness of the people. Something that brings you to be tempered in the alchemical furnace of the desert. To gaze up at the stars that burn bright in the obsidian sky. Outside the thorn bush and cactus keep their independent positions in the flat lands and in the canyons. Keep your distance! they say to each other with their formidable spines. Stay out of my way! And yet standing amongst them you have never felt so together in your life. 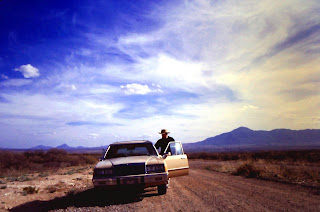 For seven years 1994 - 2001 I came with Mark to this old mining town in the Chihuahua desert. We rented apartments, bought thrift store furniture and made friends with those fierce independent spiky people. This is a postcard and if I could put everything I loved about this place into it I would. But that’s for a book.

What I want to say is I learned a lot of things here I couldn't have done if I'd stayed in my conventional London life. England is a time place, cold and damp and saturated with ghosts and history, obsessed with form, always looking back. Arizona is hot and dry. It's all about space and opportunity and looking forward. My old friend Carol went into the desert when she was 40 years old. Everyone had left her and she had to start again. She sat down in the middle of nowhere and cried for a long time. Then she put her hands into the earth and her hands formed bricks out of the red mud. She built a house with those adobe bricks and then she lived there.

To start again you have to find a new point of departure. I had left the city and my old life and I had to learn another way and this is where I learned it. I learned medicine plants, I learned to live in a straw bale house without A/C or a telephone or a lock on the door. I learned to hold my own and come to my own conclusions about the empire, as I watched chain gangs working along the highway, when the sulphuric acid from the mine’s slag heaps stung my eyes, when I heard immigrant families running down the streets at dawn and helicopters searching for them, when found young men standing in the garden, lost and collapsing with thirst and exhaustion, having walked and hitched all the way from El Salvador.

I learned from real hippies who had settled here in the 70s: flower girls who had come out of Haight Ashbury, artists who had walked away from fame in New York, who had spent ten years travelling in a bus across America, radical lesbians, activists, poets, the first permaculturists, the first people to build compost toilets and grow organic vegetables. People who had put themselves on the line and weren't going back. They were tough and bitter when I met them, living in rooms full of books with painted floorboards and a wood stove. And I spent winter and summers in those rooms in an old miner’s hotel, in an adobe roundhouse, in a yurt. I lived among medicine plants on the edge of the wild desert and I listened to their stories. They passed everything on. Everything that worked and everything that didn’t.

It was not paradise. It was an immense red land with an immense blue sky, where you could drive out down a road edged with sunflowers all the way down into Mexico and feel entirely free. But, of course, no one was entirely free. “Little roads not immune from grief,” Carmen used to call them. This was Apache territory, the last tribe on Turtle Island to stand against the white invaders. They lived in warrior bands in these sky islands like mountain lions, red bands tied around their heads, men and women smoking the rough leaves of wild tobacco.

What I learned from Arizona was about keeping a flame of a different world alive in spite of circumstances. How you do this without losing heart. How to endure alongside the earth and all its creatures. How to withstand the shocks of history and keep your humanity intact. To live a medicine life. How to wait in the long afternoons, to live without comfort or convenience. How to walk through the territory and not be afraid of snakes and scorpions, of flash floods or a bear or the border patrol asking you, what are you doing out here? How to look them in the eye and say:

Why officer I'm looking at a flower, what are you doing?

I'm looking at this scrawny stick because underground it has a vast reservoir stored in its tap root that can keep it going through this summer drought and tonight when we are sleeping it will unfold its white lotus-like flowers as it does once a year. And all the moths in the desert will be summoned by its extraordinary fragrance. I'm learning to be like that flower that some call Queen of the Night and the Apaches call Pain in the Heart.

When I returned to England I brought that medicine with me. It's a bitter medicine because it's got broken heart in there and shattered illusions, dreams that didn't work out and loss. But the medicine of the heart is bitter, because it's our experience that will really come to matter in Transition. Not just our obvious skills and abilities, but those some of us learned while we were out travelling in the far-flung places, on the road, waiting in a desert town for destiny to knock on the door.