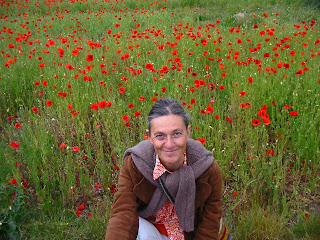 There is a region in Norfolk called Poppyland because, as the summer sun burnishes the cornfields, the poppies appear in their thousands amongst the green and golden stalks. The poppies arrest the eye, scarlet red, the colour of blood, and stir something unnameable in the depths of ourselves.

Last week Bungay Community Bees went into the local primary school to teach children about honeybees. What do bees love more than anything? I asked. Flowers, cried the children. But amongst the seven flowers I had placed in a honey jar the poppy was the only one they recognised. They did not know cornflower (is that a bluebell?) or common thyme or dog rose. They were eight years old and had never put a quill of white clover in their mouths and sucked out its nectar. 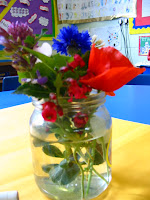 Afterwards I realised they were growing up on weed-free lawns without a direct rough-and-tumble relationship with wild things. But still they knew the poppy: we gazed into its stamens, at the blue pollen the honeybee collects as it races around the flower, and then we raced around the playground in circles and in figures of eight, in imitation of the waggle dance. This is the complex dance that communicates the way from the hive to the flowers. We were following the tracks creatures have made on this earth for millions of years, shapes that still live in our imaginations no matter how much we are educated to live in squares and boxes. No matter how our machines and chemicals try to eradicate the beauty of deep nature from our lives.

Poppy seeds are amongst the plant world’s most enduring time-capsules and they were once known as flowers of the underworld, the flowers of the mysteries. Their colours are all arresting - the blue Tibetan poppy, the yellow Welsh poppy, the huge scarlet Oriental poppy, the glamorous orange poppies of California. And all of them possess the medicine of memory as they do forgetting. Civilisations come bearing opium poppies in their hands: you find the mauve and white “plant of joy” in Sumerian texts and in Egyptian frieze gardens (with yellow mandrake and blue cornflowers); seed pods of opium are among the nine circles of wild flowers in the tomb of the boy-king Tutankhamun. Before pesticides suppressed their germination wild blood-red poppies were found sprinkled throughout the cultivated world, amongst the wheat and barley, reminding the cities of the price they pay each time they sow a field, or build a house. Or go to war.

Poppy girls
When I was eight years old I learned a myth about those flower tracks that underpins the whole of our modern world. The myth of Persephone and Demeter. In The Classical Myths of Greece and Rome we read that young Persephone, stooping to pick a wild lily, falls into the kingdom of Hades and becomes his sorrowful bride.

But this is not the story that the initiates of the archaic worlds learned.

For them the Queen of the Underworld was not a foolish girl, but the personification of wisdom, the being the ancient seers and medicine men consulted in the deep wild places within themselves. And maybe that was why I began to question, so many years later, that famous six-month bargain Pluto made with Demeter, why Persephone is never depicted in the upperworld of the sun and earth. Why she only exists in the land of the dead. 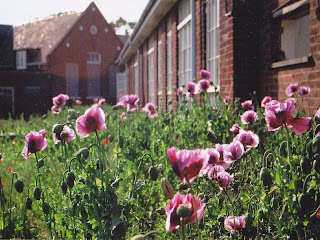 When I began my own inquiry, I found our civilisation does everything in its power to keep Persephone in her place. Persephone is supposed to return each spring with the flowers and bring the wisdom of the night and winter with her. Without her her “mother” Demeter is a foolish, weeping woman, incomplete, without any knowledge of the mysteries of birth and death that reside in the roots and seeds of the wild earth. The truth of the matter is that the world constructed by the classical philosophers and their inheritors, the scientists, could not exist if she were alive in all of us.

Persephone was originally the Kore, an aspect of the three-fold Moon goddess, and what is happening in the “official” myth is a splitting, a fragmentation of the female psyche in order that the patriarchal mindset can hold its invisible sway - the kind of story that psychologists like to use, while keeping us all inside the domestic realms of Demeter.

The mythologist Carl Kerenyi writes that originally Persephone did not “fall” but went into the underworld at the request of Rhea, her “grandmother”, the ancestor of the wild earth, to put the world of agriculture, the world of civilisation, back into balance. Once there she did not ally herself with her dark father but with her wild ecstatic half-brother, Dionysus and their fall-and-return mysteries made a way for human beings to remember their glorious origin, a way open to all those who journey into the wild, uncharted territory of themselves.

Persephone does not belong to the cultivated world. She represents the parts of us our culture makes no place for except as an untouchable. She lives in wild places, in the deserts, amongst the thistles and tares. To find the kind of knowledge she represents we must search those parts of ourselves that are not subject to a bargain between matriarchy and patriarchy; to treasure those parts of the female being, of the human being, most people leave out or throw away on the garbage heap for the sake of a convenient life. It’s the wild flowers that grow down in the underworld that guide us, as they have always. The flowers live in a country we cannot always see but sometimes feel in our hearts. They appear and call us to return to our original nature. We have to find the way because it is the one that will restore the earth when we follow it.

52 Flowers That Shook My World 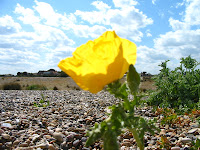 In 2006 I began a book that traced the relationship between flowers and the human imagination, those circular and winding tracks that are buried deep inside. It’s a record of a 10 year exploration into the linguistics of wild medicinal plants and a description of a practice I developed with Mark that began with some questions:

Can we enter the flower’s territory on its own terms, beyond our monocultural control of the “environment”? What effects do their fragrance, their medicine, their shapes have on our imaginations, on our memories? How do they enter our dreams?

The practice is about encountering nature from what some call the right-hemisphere (as opposed to the controlling rational left hemisphere), and some the flowermind. It means working with flowers metaphorically the way poets look at a tree - as a bridge between the visible and invisible worlds - Edward Thomas with aspens or Seamus Heaney with a hawthorn tree; mythologically, in deep time, the way Robert Graves contemplates the acacia or Celtic scarlet kerm-oak; metaphysically, in the way Annie Dillard comes eye-to-eye with a weasel, or follows a creek during its year cycle. The practice took me travelling: on a medicine journey with a desert bush in old Apache country, dreaming with the aboriginal eucalyptus in Western Australia, defending a patch of willow trees with a group of activists in Oxford, contemplating under the Buddha’s pipal tree in Sarnath; with peyote in the Sierra Madre mountains, with liberty cap mushrooms in the Chiltern beechwoods, through a night garden in Norfolk stoned on hemp flowers, having a rethink about narcotics, about everything, using the flower as a lens through which to understand events, people, places, what it is to be a writer, to be female, to belong.

I wanted to know if a modern citydweller could recover their aboriginal ability to communicate with the earth, if we could reconnect with our own ancestral dreamtime, whether we could live symbiotically with the earth as the Gaia theorists suggest. Whether, in fact, we could as a collective get back on track.

Most of all I wanted to experience the world of flowers fully, intensely, rigorously, the way you throw yourself into childhood, or first love affairs, which is to say utterly; I wanted to go into the world of nature the way Roland Barthes once went into modern society, sideways, surprisingly, to hold a flower and shake out its meaning, and in turn, let myself be shaken. It was, as it turned out, a radical move, because when I immersed myself in the fabric of these wild places, I found that our Western world, our future, depends completely on our reconnection.

I came to see that the long and winding road will still lead us home, so long as we keep an ancient bargain our ancestors made with the earth thousands of years ago. It’s this negotiation with life we are having to wake up to now and remember, and this is as much a work of our imaginations, as it is ecology, or any kind of climate science. Because now is not the time to fall asleep in poppyland. 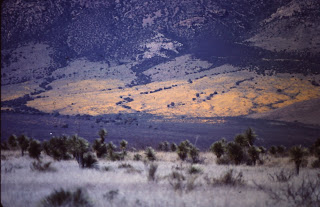