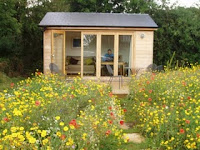 Last week our telephone lines went down in a storm. Thunder shook the house, heavy rain soaked the gardens and barley fields and a bolt of lightning struck the corner of the lane by Mr Moyse's. The whole neighbourhood lost their connection to the world. Various British Telecom vans appeared on different days in front of different houses. “We think it’s lightning,” they said and went away.

On Thursday there was another massive storm down the Waveney Valley. The power lines in the local market town went down and all the shops in the high street fell suddenly dark and silent. No one could trade (except in cash). The bank machines froze, the petrol stations closed. I bought my goods on tick and hoped we had enough fuel to get to the next village.

Then my own power lines went down. I got hit by a high fever and lay disconnected to the outerworld for three days. I shook and shivered and sweated and thought how quickly your world can get thrown upside down. One minute you are dandy and sauntering down the lane to blog from Philip’s daisy-surrounded studio and the next you feel incapable of cycling to the nearest wi-fi at the local hotel. One minute you were a bison chewing yarrow and sweet grass in the high steppes and the next the Ice Age had cometh.

“And then there’s the giant solar flare from the Sun,” remarked Mark blithely on return from a Transition Suffolk gathering and handed me another lemon and ginger hot drink. "Which could put out the electrical systems for years."

Outside the window there was a small hubbub: a tribe of house martins were sitting on the wire running their annual flying school across the garden. Their sleek metallic-coloured bodies skimmed past so close to the window you could almost touch them. They were so vibrant and fast and alive, needing nothing except their own ingenuity and skill to power themselves all the way down to Africa. In a flash all The Road-like thoughts had vanished from my mind. Change happens quickly both ways. That's the good news.

And so here we are on Monday down at the Community Centre, still out of contact and feeling more horizontal than vertical, hence this rather less-than-robust introduction to the week. I was planning to write a communications post about the terrifically exciting Social Reporting pilot we’re launching at this year’s Transition Conference, organised by Ed Mitchell (web coordinator for the Transition Network) and myself. But sometimes you just are not as vibrant and fast and alive as you’d like to be and have to be flexible. That one will come next time. 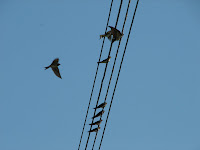 Meanwhile welcome to our Transition Themes Number Six where This Low Carbon Life crew and guests will reflect on different aspects of Transition groups, from food to economics: Jon Curran will be reporting about Norwich Community Bees, Simeon Jackson on a new Outreach project. We’ll be hearing all the latest from the fields of Norwich FarmShare's first delivery of veg to the city and Olivia Heal will reveal the alchemy behind lacto-fermentation for the Low Carbon Larder.

At the weekend Kerry Lane will be sending an "outpost" from her new Transition job in Scotland and we'll also be cross-posting from the regional OneWorldColumnon a blog on the economy and the environment by Mark Crutchley of Norwich Greenpeace. Because no matter how much our seemingly clever and powerful networks convince us money is the principle driver of life, the earth always comes first. Watch out for that storm!

Philip's studio in summertime; still from The Road; swallows on the wire, from Elena's post, Things I Like to Do in Summer, June 2010.
Posted by Charlotte Du Cann at 20:44