This month all over England tents are appearing in their thousands across green fields and meadows. If you were a stranger you could be fooled into thinking we had become a nation of refugees, or had broken out into civil war. But then you realise the people are doing something rather more entertaining. We're doing the summer festival thing; escaping from the city and our ordinary routines, picnicking, camping, dressing up, dancing and singing, making merry while the sun shines.

Although Festival-going was once a hip and radical way to gather and listen to music or explore alternative living on the planet, it has now developed into a mainstream pastime. There are festivals and summer camps happening everywhere in the UK: funky, commercial, political, experimental, traditional, Transitional.

And so, during the days leading up to the Transition Conference 2011 in Liverpool, This Low Carbon Life blog crew will be looking at all gatherings great and small this week and asking: are these outdoor pleasuredomes just an excuse for hedonism and a mass distraction from reality? Odd weekends where we can cut the slack, let off collective steam and convince ourselves we are groovy movers-and-shakers really underneath, before returning to our conformist high-tech, high-carbon city lives? Or do they serve a real and essential purpose, providing a meeting place that is not possible within the restrictions of our “normal” social groupings and work places? A glimpse of how life could be if we dropped our collective desire for possessions and mechanical power? Something nearer the earth.

Nearby at the Henham Estate as the security fences for this year’s Latitude Festival are put up by workers bussed in from London it’s easy to be cynical, but last month I went to a convergence that in many ways has replaced the once Great Green Gathering and discovered something else: 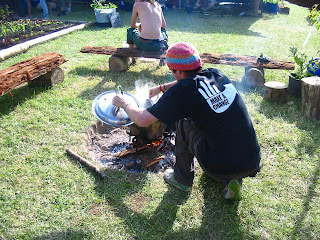 Tin Village, Sunrise Festival, Bruton, Somerset
The village is constructed the week before: a square of tin-roofed timber-framed buildings set round a no-dig garden and a wood-fired pizza oven. The hand-chopped fuel heats a copper tank that feeds hot water into the field-kitchen. The waste water feeds into the grey-water system constructed from local reeds and iris flowers. Breakfast and lunch is cooked by Jumala on rocket stoves, perpetual chai brewed by George on a camp fire. Even the Transition Network newsletter being edited by Mike today as I arrive is sent on the wire using solar and wind-power. The Village is a travelling model of off-grid living, organised and run by people from all over England (some Transitioners, some who are already living communally on the land), and the purpose behind everything here is a teaching and a skill-share, how to live sustainably, with an eye to powerdown. 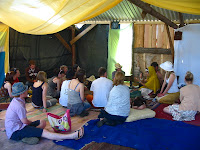 You could sit in the workshop spaces of the Village and learn everything you needed to know about downshift: practical stuff about earth ovens, inner stuff to do with change. Mike begins at 7am teaching yoga and ends at midnight showing films about 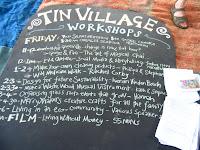 peak oil and living without money, I’m giving a workshop on Social Reporting and Storytelling with Ed (web coordinator for the Network) and working my keep in the field-kitchen, making dough, chopping veg and talking with festival goers who queue up to make their own organic pizzas. It’s hands on, full on, for three days. 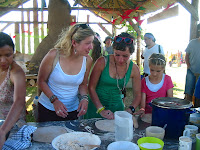 Here I am with Cat from Transition Brentford discussing wild edible plants, listening how to make a disinfectant from horsetail and orange peel. Here I am rushing off with a plate of chickpeas for Pete from Tinker’s Bubble who has just found two swarms of bees underneath a car. Here I am talking with Kath (one of the Village’s organisers and also a beekeeper) about the best ways to transport them. Here I am talking with Jumala who made the chickpeas and who used to cook for the Hari Krishna folk in India and Cardboard City in London. And now back again kneading dough: push, pull, fold, feel, let go.

Afterwards I walk around the tents in the two fields, checking out the scene like everyone else. Drink, eat, move, listen, watch. Do things I wouldn’t normally: dance to The Orb, sit naked in a sauna, drink mead, watch the sun go down between the green hills with a hundred other people. The shapes and colours from another England appear like magic: tents like giant hats, blackboards with curly coloured handwriting, girls in wild exuberant costumes, pennants fluttering in the breeze. Wizards talk about the end of the world, circus performers tumble through hoops, a black poet tells a tale about losing his leg, children in dragonfly wings climb a dragon made from ash and willow branches. Crowds roar at bands at several stages. You can cycle to recharge your mobile phone, work for two hours in the Buddhafield café and get a free curry, make sour-dough bread or a wood bowl in a forest garden, you can lie in a rainbow faraway garden and rave on till dawn. Boom, boom, wah-wah, the party in fairyland never ends. Or so it seems. 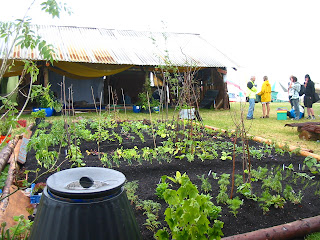 What matters is that we remember we are all workers and that we care about each other, says Theo Simon from Seize the Day in the Green Dome. That’s the sentence that sticks among the millions of words and lyrics floating in the breeze. Hard to remember when there is a pressure to enjoy everything, catch it while it lasts (quick, quick, because in a few days the show will disappear). That’s why it’s important to write stuff down I’m telling the Social Reporting crew on a dry-run for this weekend’s Transition Conference. We have to feedback our experiences and put them into form, so they take root within the fabric, or it could vanish like a midsummer night’s dream. What matters is that we start telling a different story. 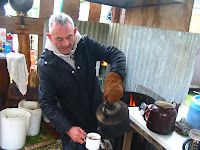 What is the story? That’s the key question. The story is what you keep and want to pass on. The story you can tell to a circle of people, or write down because you care. The rest is transience. What remained from Sunrise was the fire, the feeling of being part of a crew that converged and did stuff together. Head, heart and hands knowledge that you can’t get from books. The first two days were hot and beautiful and then on the last day the storm came. The wind howled and shook the tents. I sat with Mike in the children's activities area among a pile of rain-soaked mats and drank coffee gratefully from a tin mug, as the Village crew began to chop wood and light the stoves. Rocket stove, camp fire, earth oven. That’s when you remember what really matters: shelter, warmth, food, company, and most of all warmth.

No fire, no people.