When the Chips are Down 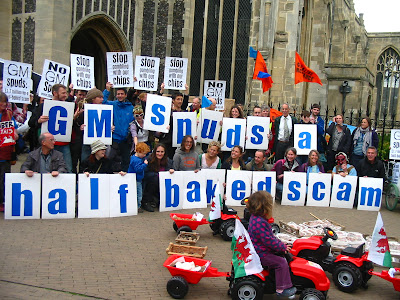 It’s noon on Saturday and a small and buoyant crowd of people are gathering for a rally outside the Forum. Activists from France, farmers from Norfolk, campaigners on bicycles with placards saying Stop Gambling with our Chips!, children riding small red tractors piled with red and white tubers from Wales. A waitress from The Greenhouse is handing around (delicious) organic chips to passers-by. I’m taking pix and speaking with Brenna and Tierney and Christine from Transition Norwich, Becky and Hayley from GreenGrow outside Bungay and the people from Growing Communities in Hackney. We’re all here to champion the potato, that key staple veg of all our allotments, gardens and fields and protect the land from the invasion of GMOs. 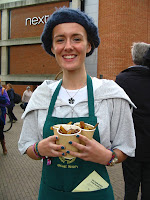 For the last ten years the Sainsbury laboratory at the John Innes Centre has spent £1.7 m of public money researching (so far unsuccessfully) a potato that is resistant to blight. During this time the UK has successfully resisted the introduction of GM food into its stores and supermarkets. But the laws in Europe are now changing, making it easier for GM crops to be grown and the debate is back on the table for both growers and consumers. Already the seed merchants and pharmaceutical companies are pressurizing farmers in East Anglia to adopt them and this event is bringing this into public awareness. At 1pm a red tractor will drive through the streets of Norwich to the John Innes Centre and deliver a load of conventionally bred blight-free potatoes in protest at the research and trials taking place there. 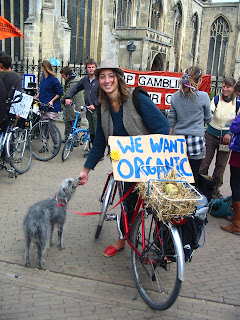 “It’s becoming impossible for farmers in Canada to be organic," reported one of the speakers (this week a farmer in Australia is suing a bio-tech company as their seeds have entered his crops and he has lost his organic status) as we listened to speeches from the Soil Association, local farmers and national campaigners outlining the main reasons why public money should be spent elsewhere.

“It’s complex,” said Josiah before he went on BBC Look East to discuss the GM potato trials at the Centre. Scientific research and the debate around it is complicated, but the decision to allow GM trials is simple. You either believe that it’s OK to radically interfere and manipulate the structure of plants and sow the land with these invasive artificially-bred organisms.

Or you know it isn’t.

The real complexity here however is not this decision, but in arguing from different paradigms. One where corporations seek to control and exploit the natural world for profit and to drive the industrial food machine to every corner of the globe, and the other (of which Transition is part) where individuals and groups seek to establish a small-scale agriculture that works with the natural world, to prevent waste and relocalise the food chain. Josiah who has worked with local growers for years (including FarmShare) and knows his potatoes (as well as the research behind them), faces the same difficulty all of us do in facing that argument.

The people who push for GM are smart and aggressive and have little conscience about these matters. Their decisions are based on conquest and profit. They also fund the academics who can argue cleverly on their behalf. Those who oppose GM have gut instincts, a knowing in the core of themselves that bio-tech crosses a certain line and a feeling they do not want to eat food grown in this way, anymore than they want to eat cloned animals. 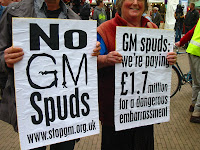 The majority of people in the UK have those same unacademic feelings and instincts and do not want to put “Frankenfoods” in their shopping baskets. Corporations seek to persuade everyone to buy bio-tech by claiming it will banish the spectre of future World Hunger, mostly in Africa. The reality is that there is already famine in Africa, as there are massive land grabs by UK bio-fuel companies (a main cause of rising food prices). There are also studies that prove growing organic crops is a far better solution to food security than global industrialised farming which dispossesses and exploits people, drains water tables and destroys local eco-systems. The “opposers” are in fact not so much against GM and its consequences but for everything it takes away, including social equity.

The difficulty is that it is not really an argument we need to be having. Arguments reduce issues into black and white boxes and exclude the ur-complexity, which is not the Byzantine line of scientific reasoning, but the richly-woven web of life, the way everything on the planet is connected and in relationship. The dominating “left-brain” mindset of Empire goes way too fast for this complexity to be seen or heard. It deliberately compartmentalises each issue, so that its contradictions never confront each other. It reduces communication into superficial feel-good spin whilst keeping the depth discussion of real-world ethics and social responsibility at bay. It reduces the globe to a soundbite. A few short moments on a television broadcast. 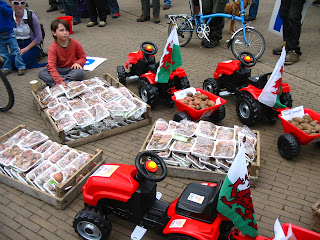 GMs have been in use in North America for years now. The crops don’t give the great yields that are promised (and sometimes fail), use more pesticides, and the seeds (which farmers can no longer keep themselves) have increased dramatically in price. Economically many farms are struggling. In spite of all the scientific research there has been no study on its effects on people’s standard of health (the US has one of the worst in the Western World). There are plenty of good reasons why we are outside the Forum today in defence of the real potato. But the underlying force that brings us all together has been the subject I’ve wanted to pay attention to this week on This Low Carbon Life. 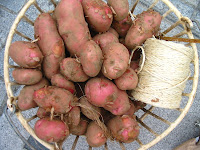 Because ultimately there is a decision that we all have to take at some point down the line, as the Artic melts, as the environmental storm brews all about us: whether we follow the reason of the mind or the logic of the heart. This ultimately is a question of allegiance. Not just to the beating engine of our bodies, to the profound feeling intelligence of our beings that informs every great thing that we do, but the heart that is the natural order and organisation of all life.

The earth is not made of the human mind. Cities and civilisation are constructed of the human mind, but the natural world and everything we depend on for life is not. Air, water, plants, pollinators. Our minds tell us we can control what gives us life, in spite of increasing evidence to the contrary, and forget one essential fact. The earth is a creation of heart.

We just have to reassemble the letters.

The gathering outside the Forum; chips from the Greenhouse; Brenna on her bike; Jack from GreenGrow with the red tractors (small version); already blight-free potatoes from Wales.
Posted by Charlotte Du Cann at 15:45 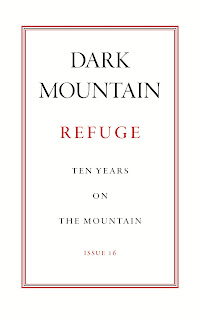