Power of the powerless

It’s daybreak and a small bird is tapping at my window for insects. Rain is sliding down the panes and the droughted barley fields that surround the house are drinking in the wet. It’s difficult looking outside to connect the physical presence of roses and a cloaked summer sea with the statistics of climate change and peak oil that keep appearing on my computer.

I close my eyes to know what to write in a time of confusion: the tweets and blogs of the week flash past my mind - the UK government's suppression of the facts about the future of oil, the increased militarisation of the US police force. On the surface the dazzling images of eternal growth, presidents, celebrities and omnipotent armies continue; underneath the facade everyone else raises the alarm. The world is running out of time.

Who is it who will join up the dots, connect one statistic with another? What is it in ourselves, raised to think in discrete and separate units, to defend ourselves in dualistic arguments, in flight-or-fight antagonisms, that has to break out and empathize with our kin? It's becoming clear we cannot hold on to the mindset that created these global problems we now face. We have to contact something else entirely in ourselves. Something the world's media rarely mentions.

What is the right response to the news for example that America houses 2.3 million people in gaol (up from 400,000 in 1980) and that those prisoners work for 35 cents an hour refashioning toxic weapons without any protection or rights? What is the right attitude when we we learn that jellyfish in the world's oceans are devouring vast amounts of plankton, affecting both the marine chain and the carbon in the atmsophere, that the bellies of fish everywhere are filled with plastic? What do we do with the conflicting stories inside that tell us about the land of the free and the plenty of the sea that anything is possible and there is always toast for tea?

Do we turn our faces away and say with a shrug: what can we do? Do we feel helpless and afraid and stop reading these reports? Or do we continue to read and see everything we do in the full awareness of the systemic breakdown and then take a radical step in our own lives?

"We are all part of the machine", said Theo Simon from the radical folk band, Seize the Day. We were under canvas at the Sunrise Festival in Somerset and the tent was packed. Simon was telling us stories of resistance - singing for the striking wind turbine workers at the Isle of Wight, taking part in the anti-cuts demonstrations in London - and how crucial it was we remember to connect with ourselves as workers, as cogs in this machine, because it does not work without us (and that the popular revolutions that overthrew tyranny in the Middle East only happened when the ordinary people joined with the students and activists). And most of all that we care for each other, that we come from heart. Even as we face the helmeted forces on the police line. 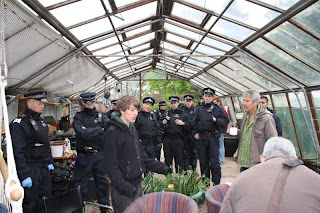 At the same time America was beginning to intensively incarcerate and tyrannise its own people, a movement began that David Korten documents in his book The Great Turning. To turn means to “walk away from the king”, to deliberately disengage oneself from the clutches of a 5000 year-old Empire. It is an act of dissent that seeks, on a personal and social level, to expand beyond the bullying imperialism of modern culture, in order to see life in terms of consequence, how every action we take affects our fellows and all living systems. It is to actively shift "from empire to earth community", inspired by what some might call the imperative of conscience.

In a time of increasing oppression and planetary fall-out, a decision becomes necessary: a decision only our hearts can make. We are not taught to value the intelligence and fair play of the heart. We have learned to like theories, the ideas of democracy, of love, of freedom, and play with these things in our minds, as if they were arbitrary, as if we had a choice. And perhaps at one time, we could fool ourselves we had a choice. But now, we realise if we are smart that we do not. Instead we have a decision to make: about integrity and the part we play.

In a state of fragmentation you need to hold fast and make meaning. In a restless time, you need to be still, to secure a foothold in whatever place you find yourself. In a present in which the future has been erased, you need to remember, to look forward. As the shock doctrines of the world exact their penance from the populace, an act of disobedience may be necessary. In such moments of extremity, you learn not to hold on to the grandiose abstractions of the mind, to textbook ideologies, but hold dear the things of the real world - the small move, the valuable encounter, the fragrance of the morning, the flower as it opens, the people who still walk beside you however hard the wind blows. 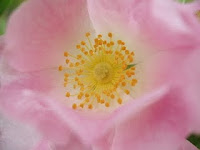 To live in harmony within the collective there has to be relationship and fellow-feeling. Communication between us cannot shut down. The empire depends on those feelings of helplessness, on our desire to escape and our lack of connection with one another and the planet. The heart is the only power within us that can break the mindset of empire. But to find the heart, we have to lose the one thing we are trained to believe is more precious than anything: our separateness.

Inside the mind there is a hostile god telling us: you are different and alone. But we are neither different, nor alone. We have been condemned to become the very people we once exiled ourselves from, trapped in what W.G. Sebald called in his peerless metaphysical work on history and landscape, the rings of Saturn. The Hebrews have become Egyptians, constructing watchtowers, oppressing their slaves, building ghettos. The Christians have become Romans treating the world as their bloody arena. Everywhere there is a consolidation of power, of elite, of privilege, of masters and the master races. The god’s voice dictates the minutes of every meeting, burns down the world with his apocalyptic thunderbolts and ire. What do you or I have? Nothing, except the diktat that enslaves us and keeps us apart. 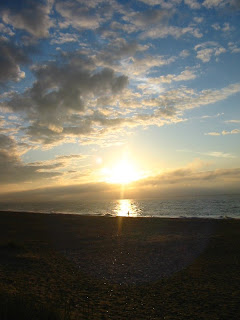 To discover the heart and re-enter the living systems, we have to let go of the god that rules the mind. We have to let go of our house rules, our temple rituals, our positions of absolute control. We have to have the courage to enter a state of not knowing the way all writers do when faced by a blank page and the fire of inspiration has yet to come. We have to let go of form and experience feeling, let the words arrive in a different order.

I open my eyes. The sun is flashing on the ocean, the wind rippling through the green cornfield, the bird is in the air.

I walk out this Midsummer morning.