Today's post is from the Transition Network's Social Reporters project where we are immersed in our Looking Back (at our 2011 pilot), Looking Forward month . During this second half the Social Reporters have been looking at the year ahead and outlining their plans and visions for themselves as Transitioners, their initiatives, their neighbourhoods and the world. Here is mine:

Visioning is one of the Tools and Ingredients in The Transition Companion. It states that not being able to imagine a low-carbon world is a huge impediment to designing and realising it.


Transition suggests we start by creating a positive vision of a future. It asks:
If you woke up in, say, 2030, and the transition had been successfully managed, what would it look, feel, smell and sound like? What would you have for breakfast? What would you see when walking down the street? 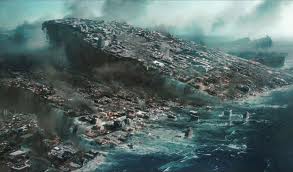 Transitioner. In spite of having an active imagination I am not great at looking ahead. I am more of a dreamer at heart, which means I see things within the complexity of the present moment, rather than in linear time. When Transition Norwich launched their Transition 2.0 personal carbon reduction initiative, in response to the imminence of climate change, fifty of us engaged in a long group visioning process. Afterwards everyone began talking animatedly about community and food projects, about getting in touch with neighbours, sharing stuff. I closed my eyes and I saw myself in the garden and everything appeared the same as it is now. It was perhaps quieter, as if the world beyond the garden had stopped running around chasing its own tail.


that has responded to climate change, has far less net energy than today, has moved beyond economic growth, and has adapted creatively and purposefully.

Listening to everyone speak, I realised I was already living in that future. I no longer had the means to fly around the world and had already rooted myself in the neighbourhood. Most of this had happened by circumstance, rather than design. At the time I felt like a ninny but now, thanks to the Transition Circles that emerged from this meeting and the two projects that came out of them, I have forged some valuable tools for downshifting and am now able to articulate and share these with others as a Transition communicator. The individual moves you need to make with those key drivers - home energy, transport, waste, water, food.

Step one: walk your low-carbon talk

Projects The two projects that came of our Transition Circles were the Low Carbon Cookbook and This Low Carbon Life, a community blog that has been running daily for over two years, and provided the structure for the Social Reporters project. This year, after tracking the growing and harvesting cycles in our gardens and kitchens in 2011, the Cookbook will start taking its written form and the blogs will continue to reporting and reflecting on that future way of being on earth.
One of the blogs' greatest strengths is showing what a low-carbon culture looks and feels like, showing all its relationships with people and with the planet in a vibrant, intelligent and colourful way. This gives heart and strength and meaning to all ventures within the initiative. We inherit a world that is all creation and destruction, in which our presence is arbitrary. Two vital components that make these projects work come between these two states: 1) maintenance and stability and 2) valuing everyone who takes part.

Step 2: commit to projects and people come what may

Initiative In 2010 a group of Transitioners met in the Norwich Arts Centre and engaged in a day of creative visioning. We were improvising on the theme of Future Beings, preparing for a performance that would happen on Earth Hour outside the Forum on the Spring Equinox. We chose cards that imagined different scenarios and then spoke to each other as if we came from those futures: steady state, techno-fix, paradigm shift, Mad Max . . . During our performance we would speak with the audience as those future beings and they could ask us questions.

I spoke from an unexpected future. It was marked, like my vision, by its remarkable stillness. One day I said, everyone just stopped what they were doing up to then, and began something completely different. The change was absolute and sudden.

One thing I have learned about creativity in Transition: when you provide the space and the opportunity extraordinary things can emerge from people. Everyone that day was an actor, a performer, a speaker, a creator. When you experience those untapped capacities, you can then seize the day and appear in your true colours. You are in this venture, not on your own. You are acting in an ensemble company, backed by all the ancestors and future beings who are yet to come to this earth. When you step out you realise the audience is with you every step of the way.

Step Three: be bold, be on show 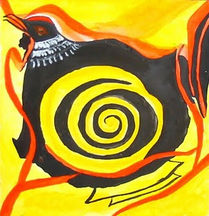 World What does it mean to be a dreamer? It means you hold within yourself a vision for the whole earth, not just how your community can feed and clothe itself, but how we need to be as a collective, aligned with the living systems. It means seeing in big time, considering all peoples, all creatures, all lands. You don't do this in linear time, mapping things step by step, but in a present moment in which the past and the future are contained. Where everything that is going down in the room, the neighbourhood, is going down in the world, what some call hologrammic perception.

It means when we meet we are all meeting as a council of all beings deciding on how the future will go. It's an attitude, a frame that brings depth and intregrity and a sense of play into everything we do.

Step Four: live every encounter as if it really matters

This is a small map, drawn up without any previous planning. As I put my attention on each section the material presented itself. All I had to do write everything down. As I sketched its contours, I realised that most of its elements, explored in previous years, were now coming into play. Even though at the time they didn't seem to "go" anywhere, now they were making sense. That is the value of visioning. You plot the map and one day you find yourself in the territory, and because you have drawn the map you know what to do. 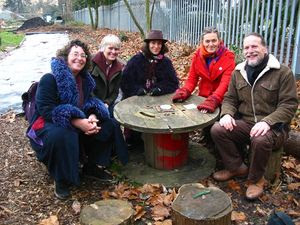 Last week five of us met up at Jo Homan's Edible Landscapes nursery garden in London, and then decided on our future weekly topics for 2012 (read all about it here). We're starting in February with a full-on month of skill-share, energy, ingredients and tools, the international Transition 2.0 film and national REconomy project. Meanwhile my fellow reporters have been outlining what will be happening in 2012 elsewhere in the UK . . do check us out!

Photos: still from 2012, the movie; visioning for Transition Norwich 2.0; taiko drummers announcing Earth Hour, 2010; visioning the future, Catton Grove Primary School (with Transition Cambridge); It takes a Billion, Billion Years to Burn Out the Energy I Have in Me by Mark Watson; five meet up in Finsbury Park
Posted by Charlotte Du Cann at 16:26